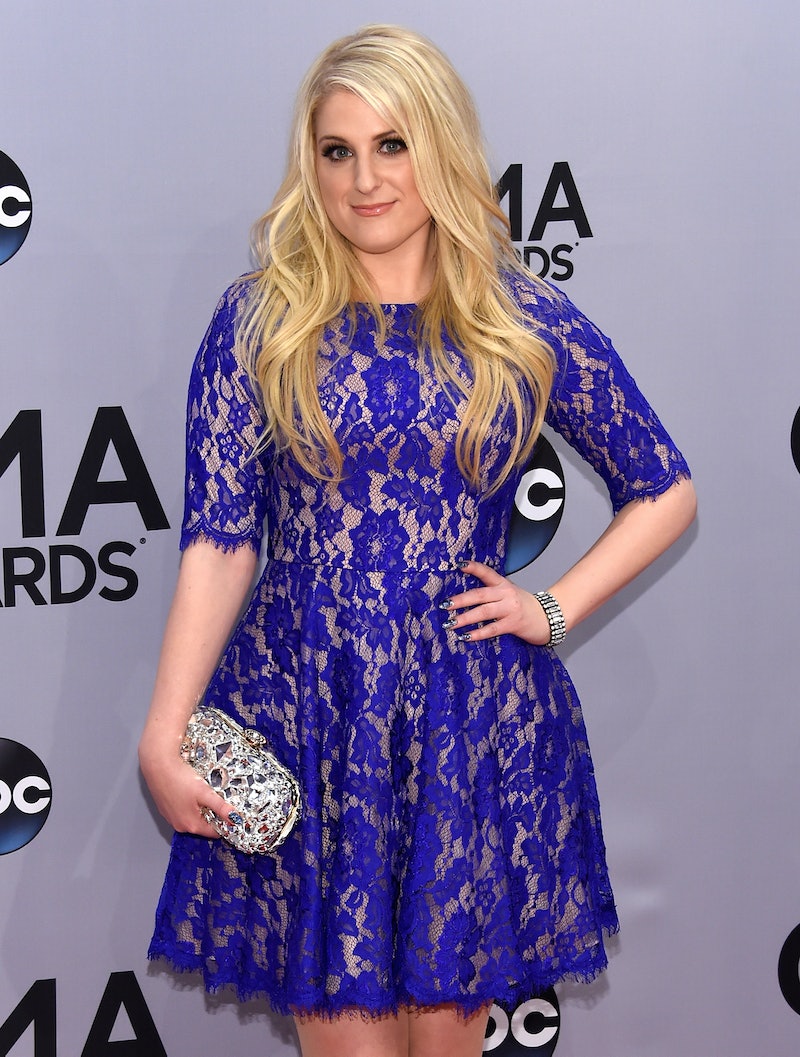 Ariana Grande is not the only pop diva — and I use the term "diva" lovingly and not in reference to the recent pesky rumors about her behavior — with a hair full of secrets. Fellow pop queen Meghan Trainor has admitted to wearing extensions, just like the "Problem" singer, and I couldn't be happier.

In a recent chat with Glamour, Trainor admitted that her hair is her favorite beauty feature. "I love my extensions," the singer, who just designed a liplicious Clinique makeup bag in conjunction with her "Lips Are Movin" single, confessed. "No one talks about it, but everyone's got 'em."

Ah-ha! There's the rub. Everyone wears 'em and it's Trainor who is talking about 'em and not keeping them on the DL. At first, I thought maybe there was a secret hair society among pop divas with ever-evolving hair, which actually isn't quite so secret since there is no logical way that, like, Rihanna can go from a pixie to a shoulder-skimmer bob with bangs in the matter of 24 hours.

But there are celebs with always-long hair who may not talk about the lift they are getting from faux locks. Trainor, who may or may not have broken a pop diva girl code by revealing her use of extensions, continued, "I was never allowed to dye my hair or get highlights or extensions because my mom was like, 'People pay money to get their hair colored, don't do that.'"

Extensions are a fairly new territory for Trainor, who donned them for the first time for her "All About That Bass" video." It was like follicular nirvana for her. She said, "It was a whole new world. I felt more powerful. I love my extensions, and I don't mind talking about them."

Sure, faux locks are, well, faux. But I applaud the adorbs singer for being honest! She's enhancing her strands, not Photoshopping fake hair into her photos to please someone else. That would be a totally different story. So don't go throwing shade Trainor's way even though she got famous on the back of a song that celebrates real bodies and real women being perfect from the bottom to the top, no matter their size.

Extensions can be fun and allow the wearer to change up their look in an instant. They are also a method with which to express your personal style, so I don't have any issue with her (or any pop star) wearing them. And neither should you!

As an added bonus, Trainor also said she loves being pale and I pretty much swooned. As a fellow apparition-skinned girl, I did the seal clap when I read what she said about embracing her light skin and loved the fact that she isn't perma-bronzing, which would be too easy.

She noted, "I'm very pale. I love being pale because when you put on any type of makeup, people notice it right away—they're like, 'Oh, she has a lip on!' But brows are everything. And a lip. And mascara."

So yeah, Meghan Trainor = #NewGirlCrush for this writer.