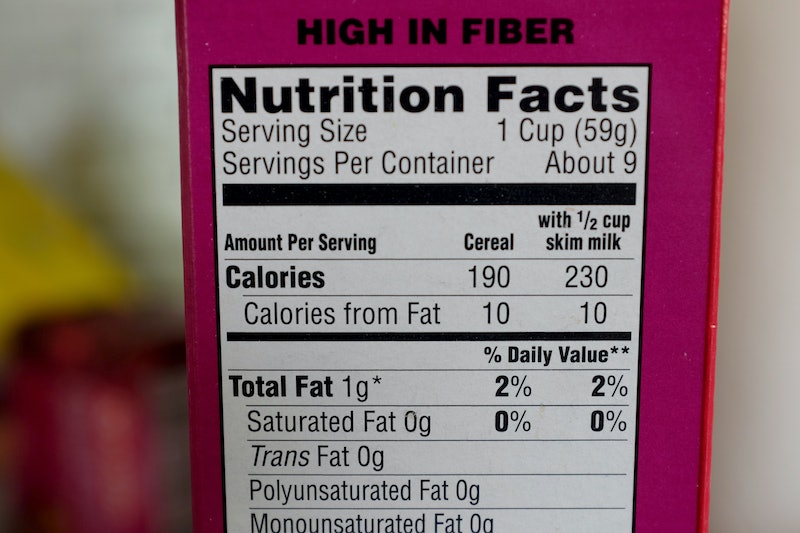 Everyone knows grocery shopping is a pain; I haven't met anyone whose idea of a good time involves painfully fluorescent lights, having to interact with people, and figuring out what food to buy that won't give you heart disease. To make matters worse, that last part isn't helped by the way food is labeled these days, because current nutrition labels actually confuse shoppers... which you may notice is literally the opposite of what they're supposed to do. In fact, a study by McGill University shows that they lead to "nutrition choices hardly different from chance," Science Daily reports. Does this mean I'm allowed to blame them for my inability to stay away from Oreos whenever I set foot in a grocery store?The study compared four different labeling systems: Nutrition Facts, NuVal, Traffic Light (used in the UK), and an unnamed system used in Denmark, Sweden, and Canada that labels certain foods as nutritious. Nutrition Facts was found to be "least usable," due to the time it took to understand and the lack of helpfulness in making healthy choices. It may point out "nutritional conflicts" like being low in sodium but high in fat, according to lead author Peter Helfer, but it fails to direct the shopper toward healthier options. Traffic Light, which uses colored labels to demonstrate the nutritional value of the food, took more time to understand, but shoppers using this system bought healthy food more often than chance.

The system used in Denmark and Sweden helped people make quick decisions, but it didn't actually do anything about making better food choices. According to co-author Thomas Shultz, in addition to not being "sufficiently discriminating," this type of labeling can also ruffle feathers when it comes to figuring out "exactly where to draw the line between nutritious and harmful foods," because not everything is a kale vs. potato chips debate.

In comparison, NuVal was the most helpful label by far. Used in some American stores, it rates food's nutritional value on a scale of 1 to 100. Shoppers found the single number much easier to understand than the complicated information found in Nutrition Facts, and the rating system summarizes both positive and negative aspects of the food, in case you needed help realizing the "chicken" part of chicken nuggets doesn't negate the "fried" part.

This study joins several others showing that consumers understand nutrition much more easily when it's laid out in a colorful, simplistic manner; all that hooplah about serving sizes tends to go over our heads. Basically, when it comes to shopping for the healthy stuff, we're all kindergartners. NuVal is still relatively new, so it's only in select groceries stores at the moment. (Here's a list of participating stores.) However, with a growing number of nutritionists calling for a revamp of Nutrition Facts, we might be seeing those brightly-colored rating stickers on our shelves soon. As awesome as that will be for everybody's general health, I guess that also means I should start weaning myself off of Oreos now, before I'm confronted with the embarrassment of buying stuff with a nutrition rating of one.