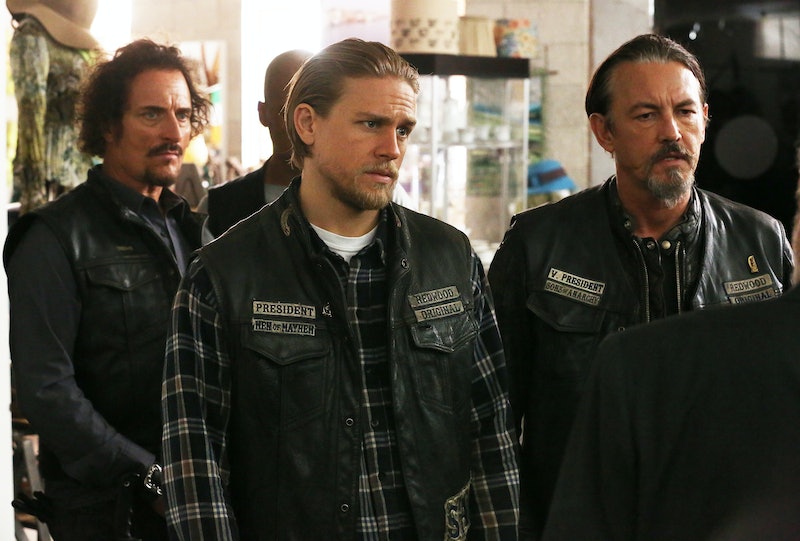 When it comes to award shows, no one gets the shaft more than SAMCRO. Ever since the series first made its FX debut, Sons of Anarchy has been snubbed by almost every single accolade in the entertainment industry — a fact that never ceases to blow my mind. I mean, it's such a good show! And yet it has received almost zero love in the awards department throughout its seven-year run. Which is why I wasn't all that surprised to learn that SOA had only nabbed one nomination for the 2015 SAG Awards in the Outstanding Action Performance by a Stunt Ensemble category. And that's it. No Outstanding Drama nod. No Outstanding Male or Female nod. Nothing. Zilch. Nada.

Granted, it could've been much worse. Last year the series wasn't nominated in any category, and don't even get me started on the 2015 Golden Globes. However, that doesn't mean I don't still consider this one pitiful SAG nom as a full-out snubfest. This show deserves so much better than that, you guys. It had a record-breaking series finale for crying out loud, so it's not as if no one out there was tuning in. But I guess that's no big deal, right?

Then there's the fact that acting itself was top-notch. I'm talking heart-wrenching performances all across the board that made you actually feel sorry for cold blooded killers. Do you realize how hard that is to pull off? And yet, I loved these little murderers. (When Jax Teller weeps, the whole world weeps with him.) But sure, there's a lot of explosions and gunplay, so a stunt nom should totally suffice.

To be fair, though, SOA doesn't come across as that captivating on paper. I remember when my cousin first mentioned the show to me. He described it as a story centered around a motorcycle gang that illegally sells guns and gets caught up in all kinds of trouble. Suffice to say, it didn't really sound like something I'd be all that into.

But as soon as I forced myself to finally sit down and watch the pilot episode, I was hooked. Despite my initial skepticism, I couldn't help but be drawn into Charming's crime-ridden world. The show was badass and made me feel like one just for watching it, which is perhaps what makes SOA so snubbable at so many award shows.

This is a tale about outlaws, after all, who completely rebel against the confines of the so-called "rules." And there's no better way to feel more like an outsider than by getting royally snubbed time and time again by the industry that created you. So, in a way, I guess it's rather fitting, though I can't help but still feel slightly bitter about the whole thing.

Given the insane amount of shows that I watch, trust me when I say that it takes quite a bit to surprise me, and SOA has exceeded my expectations by leaps and bounds. So it'd be nice to see SAMCRO walk away with something to show for it.

Don't get me wrong, it's not as if I don't think these other great shows deserve their nominations as well. It's just that when you see most of the same shows and actors getting constantly praised for their work on practically an annual basis, you can't help but root for the underdog, especially when it's covered in tattoos and riding a motorcycle.