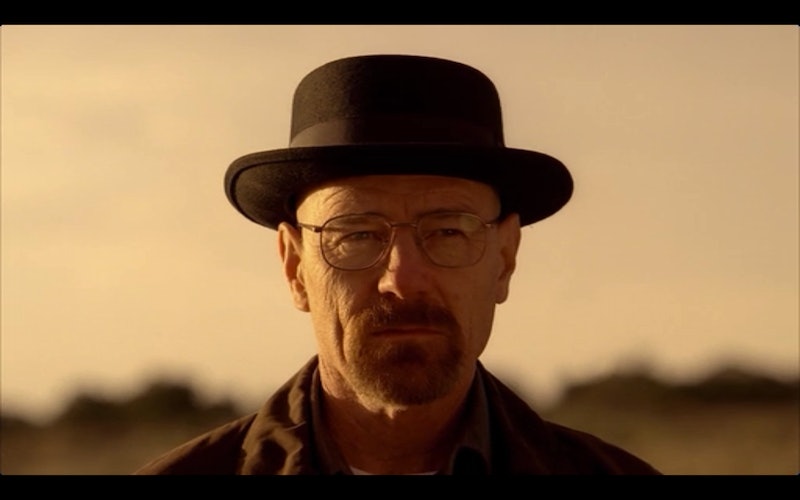 If you pay attention not only to TV but to the things people write about TV, you may have noticed the phrase "golden age of television" being bandied about. The televisual medium has surpassed modern film in hundreds of small, little ways and a smaller but very notable amount of really big ones. TV has always had its quality shows and its crap, but the high points of television right now are higher perhaps than they've ever been. If you've glanced at a computer within the last 24 hours, you're most likely painfully aware that the center of this discussion at this moment is AMC's Breaking Bad, which came to a bloody — but shockingly peaceful — close last night.

One of the best things about living in a golden age of television isn't just the jaw-droppingly good stories being laid out in front of us; it's the golden age of television criticism that comes along with it. As New York Magazine's Matt Zoller Seitz pointed out in his piece on the topic, "I have never seen anything as innovative and thrilling as what a lot of my TV critic colleagues have been doing since the mid-aughts."

And so it is with this, the end of one of the most critically acclaimed shows of our time, that rabid television fanatics were treated to an onslaught of incredibly thoughtful responses to Breaking Bad's mission, its literary value, its characters, and what it means to be have a meaningful narrative.

From the critics to the stars themselves, we gathered some of our favorite comments on Breaking Bad's slide into home base.

The thing is, we're at the point in the story where all the chickens are coming home to roost. Every consequence of every single choice Walter White has made is landing with unbelievable force. Given how many terrible things he's done and the awful events he's set in motion, those consequences should land like a ton of bricks. I just didn't expect so much of it to land in such a concentrated way in one episode. It was pummeling, it was punishing, but I can't think of a thing I'd change.

The AV Club's Zack Handlen wasn't the one who wrote the site's official recap (that we'll get to in a minute), but he did post a comment to it — that he then reposted on his Tumblr — that was very thoughtful. Read the whole thing, but these are our favorite parts:

Walt’s the story engine of Breaking Bad; it’s his actions that made the show move, his choices that generated the plot. So he was the one who had to stop it. It wasn’t about judging his character; we’ve done that. We’ve been judging him since the first season. This was just winding down, and making sure to turn the lights out one by one.

Finales for serialized narratives are especially difficult, because the serialization creates the illusion that everything we’ve seen is building towards some astonishing conclusion, some final shocking statement that was obvious from the first frame. That’s impossible, and it would probably make for some really boring TV. But hey, the pilot of Breaking Bad starts with Walt standing in the middle of the road, facing down approaching sirens with gun raised. And the series ends with the cops arriving, and Walt bleeding out in the science he loved. It was just right.

TIME's James Poniewozik was, as he often is, on-point and insightful when it comes to Breaking Bad's status as a complete narrative — and not just in regard to its future lack of episodes:

What "Felina" was — as effective, satisfying series finales are — was true. It was true to the five seasons that preceded it, true to Walter White’s obsessions and pride, and true to what Breaking Bad is at heart: a Western.

And Jason Mitchell, a professor of American studies and film at Middlebury College, emphasizes that point:

For me, the main thing that I’m looking for in any finale is for a series to be true to itself, ending in the way it needs to conclude to deliver consistency, offering the type of ending that its beginning and middle demand. That changes based on the series, obviously, but it’s what makes Six Feet Under’s emphasis on mortality and The Wire’s portrayal of the endless cycle of urban crime and decay so effective, and why Battlestar Galactica’s final act turn toward mysticism (and that goofy robot epilogue) felt like such a betrayal to many fans. And it’s why finales like The Sopranos and Lost divide viewers, as the finales cater to one aspect of each series at the expense of other facets that some fans were much more invested in.

Bryan Cranston, not a television critic but Walter White himself, said in an interview with Entertainment Weekly :

[Cranston] believes the finale cemented the notion that Breaking Bad is ”a tragedy of almost Shakespearean level. … Tragedy is not a bunch of bad guys doing bad things: ‘Oh, they killed the good guys!’ Tragedy is when the bad guys are sympathized, when you realize that it could have gone another way,” he notes. “There was hope for them at one time. Macbeth! Oh! In its truest sense, our story is a tragedy — an American tragedy. It’s not ‘good conquers evil,’ it’s not ‘good guys against the bad guys,’ it’s much muddier than that. Shades of gray.”

This one sentence from New York Times' Allessandra Stanley's review of the episode still has us thinking back over the show's five season:

The ending was clear enough; it was the beginning that was left ambiguous.

And back to that AV Club review, wonderfully written by Donna Bowman:

We’ve all been asking ourselves what we want from this show. ... But now I can say what I wanted. I wanted the special thrill that comes when the forces of luck and the forces of human will coincide to make miracles happen. And on this show, that has happened to Walt again and again in the service of his own ego. The end has been dreadful, but the means have been intoxicating. When Walt pounded the window of that stolen car with his fist, causing the snow to fall away, it was like the Fonz thumping the jukebox: a moment of supreme efficacy, endorsed by the universe. That’s what I wanted, one last time. And there it is. I’m grateful. Now I can say goodbye.

And as New Yorker TV critic Emily Nussbaum said in her analysis of "Ozymandias" a few weeks ago, this season (and the show in general) has been "nearly unbearable to watch, but a pleasure to think about."

With writers like these in a world ready and rearing to assign critical and academic merit to a television show's creative efforts, there's no way Breaking Bad will ever fully die. Walter White will live forever.