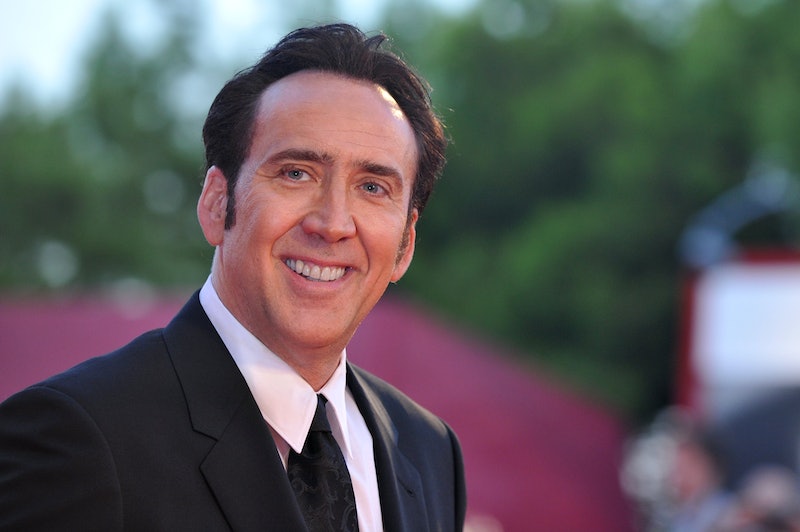 This is either horrible news or amazing news — or horribly amazing news. Nicolas Cage is set to star in a new movie called Army of One from director Larry Charles, who has Borat, Bruno and The Dictator with Sacha Baron Cohen under his belt. Great! So, what will Army of One actually be about? Apparently, this: Nic Cage as just your average American Joe, who takes it upon himself to find Osama bin Laden.

Yep, you read that right. According to The Hollywood Reporter: "Army of One is loosely based on Chris Heath's GQ magazine article recounting the real-life misadventures of Gary Faulkner, a Colorado construction worker who took it upon himself to find Bin Laden, including trying to sneak into Pakistan and Afghanistan numerous times."

While I admit there is part of me intrigued by this idea, the more practical, cerebral part of me wants to say: ABORT MISSION IMMEDIATELY.

The GQ piece on Faulkner is a pretty fascinating read. Even just skimming the first page, we learn that Faulkner went to Pakistan not one, not two, not even three but eleven times to search for Osama bin Laden (who he refers to with tongue-in-cheek disdain as "Binny Boy"). The various weapons that he took along with him throughout his attempts: dagger, crossbow, and a sword he bought on the Home Shopping Network.

Unfortunately, there is some problematic material here as well (Faulkner, for instance, refers to Pakistani people in derogatory language), so how it'll translate into a Nicolas Cage movie remains to be seen.

But, on the other hand, time and again we've seen a positive response to director Larry Charles' projects — even though they have their fair share of critics and detractors. This is absolutely fair: Borat, Bruno and The Dictator were satire, of course, but many were disturbed by various aspects of some movies. The anti-semitism in Borat , for instance, offended some, and when The Dictator was released, Arab-American groups said "his new alter ego isn't so much funny as it is a hurtful caricature that pokes fun at their culture and foments the worst prejudices against the Muslim community."

Army of One will be semi-scripted like The Dictator, deviating from the real-time format of Bruno and Borat. But, will that help it avoid criticism? And more importantly, will the film be written in a way that is appropriately and effectively satirical, showing just how absurd one man's mission to hunt a terrorist is, or will it be rife with offensive material taking cover behind the guise of satire?

Army of One's announcement comes in the wake of The Interview's global reverberations; James Franco and Seth Rogen suddenly found themselves playing on a global stage when the North Korean government named their satirical film a national threat. This raises even more questions: Will Charles consider the international implications and consequences of this new relationship that Hollywood has right now with the international sphere?

And just what kind of hair will Nicolas Cage have?

The answers could come as soon as the end of 2015, which is when Charles hopes to release Army of One.

More like this
Olivia Rodrigo’s Song Dedication To 5 SCOTUS Justices Sent A Strong Message
By Grace Wehniainen
9 Photos Of Margot Robbie & Ryan Gosling As Rollerblading Barbie & Ken
By Alyssa Lapid
What Does The Presley Family Think Of 'Elvis'?
By Arya Roshanian
Chris Hemsworth Joked That Baring His Butt In ‘Thor: Love And Thunder’ Was A “Dream”
By Brad Witter
Get Even More From Bustle — Sign Up For The Newsletter