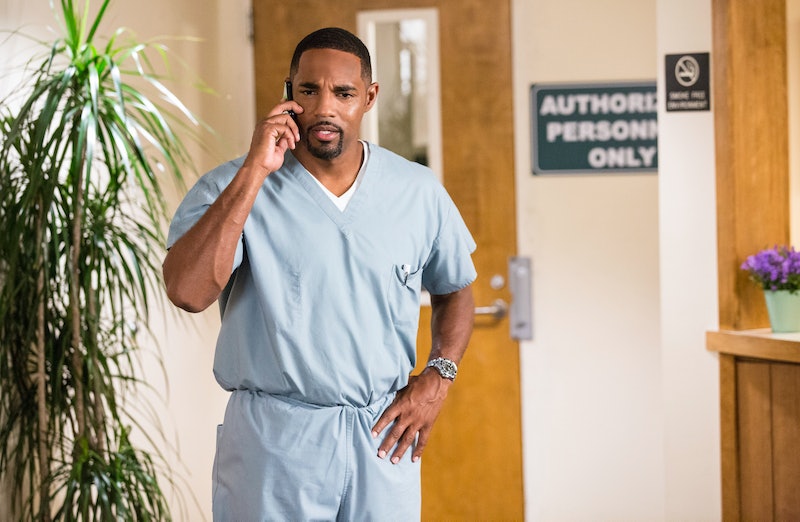 Let's be frank: Unrequited love sucks. It's even worse when you regularly have to see the guy who doesn't love you back. The worst, though? When you share a child with the guy and you make it your goal to finally marry him. No, it's not me (Mom, put down the phone and stop panicking). It's a situation straight out of the Lifetime TV movie With This Ring, premiering Saturday night. Jill Scott plays single mom Viviane and she's still desperately in love with her son's father Sean, but will he return her affections? Sean is played by TV actor Jason George, who has been in so many TV shows. Yeah, you'll definitely recognize him.

The Virginia native currently stars in the ABC drama series Mistresses and has previously had roles in Shonda Rhimes dramas Grey's Anatomy, Off the Map, and her pilot Inside the Box. He's also made appearances on Witches of East End, Eastwick, Eli Stone, ER, What About Brian, Off Centre, Castle, Desperate Housewives, Titans, and the short-lived NBC soap opera Sunset Beach. The 42-year-old actor has even shared the screen with With This Ring co-star Eve Jeffers-Cooper on her UPN sitcom Eve, where he played her on-again, off-again love interest and friend J.T. Hunter.

With a resume like that, it's almost impossible not to recognize George from somewhere. Here's a look at his biggest roles on TV to date.

Adultery is so in right now. Showtime's The Affair totally cleaned up at the Golden Globes and Mistresses, which will debut its third season this year, focuses on adultery, too. As a series regular, George plays the part of Dominic Taylor, a coworker — and lover — of lawyer Savi (Alyssa Milano). First, Savi cheated on her husband with Dominic, then she snuck around with someone else behind Dominic's back. Ouch.

From 2010 until 2014, George played anesthesiologist Dr. Ben Warren in the venerable ABC medical drama and eventually married the tough Dr. Miranda Bailey. Of course, the road to true love wasn't the smoothest for the chief resident and the former Mercy West doc: They endured a shooting, breaking up, getting back together again, watching each other date someone else, and then eventually tying the knot.

One of George's first roles was as town lifeguard Michael Bourne on the Aaron Spelling NBC daytime soap opera Sunset Beach from 1997-1999. If you don't remember which one this is, it's the one with the turkey baster pregnancy. You're welcome.

Anyway, George played good boy Michael, who fell for a journalist named Vanessa. She was always getting into trouble and he was always coming to her rescue — that's what lifeguards do, right? Well, his girlfriend Virginia was a little wacky and this is where the turkey baster comes in — to keep Michael and Vanessa apart, Virgina turkey baster-ed someone else's sperm into (ew) Vanessa.

Well, it didn't work, because Michael and Vanessa got married and Sunset Beach got canceled. The lesson here: Even turkey basters can't keep true love apart.

More like this
“The Door Is Always Open” For Another 'Breaking Bad' Spin-Off, Says AMC Boss
By El Hunt
Martin Hancock’s Wife Played A Key Part In His Return To 'Coronation Street'
By Catharina Cheung
All The Sneaky Lindsay Lohan Movie Easter Eggs In Her New Ad, Explained
By Stephanie Topacio Long
18 Unanswered Questions From 'The Hills' That Still Haunt Us Today
By Ivana Rihter
Get Even More From Bustle — Sign Up For The Newsletter