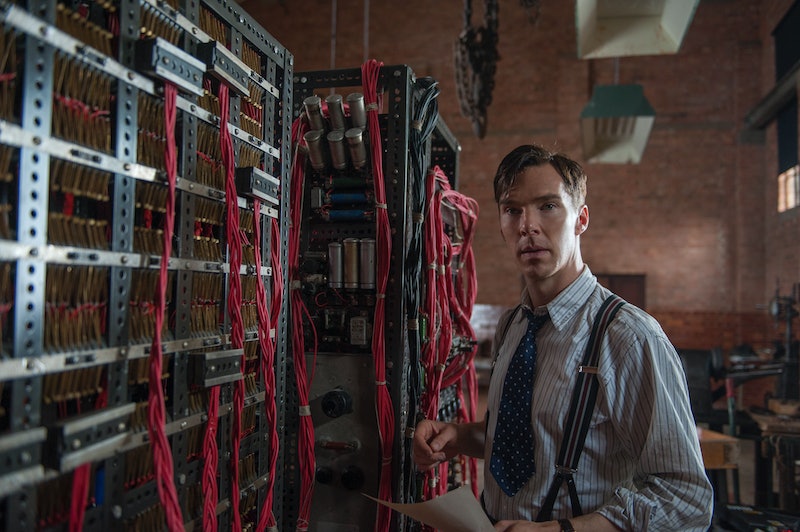 Like many people out there, I'm sure, I'd like nothing more than to see Benedict Cumberbatch win a SAG Award on Sunday, saunter up to the podium, and use his smooth, Smaug-like voice to deliver an acceptance speech. I say give the Oscar to the most deserving, and the SAG Award to whoever will be most entertaining at the awards show, right? (The Screen Actors Guild probably disagrees, but what do they know?) So, is there any shred of possibility that I'm going to get my wish? What are the chances that Benedict Cumberbatch will win the SAG Award?

It doesn't take an Enigma-cracking machine to calculate that the odds are against him. That's not to say he didn't give an amazing performance (as always) in The Imitation Game, in which he played Alan Turing, the prickly English mathematician who set out to create a computer that would break encrypted Nazi codes during World War II. The movie is about secrets: Turing keeping his work a secret from the outside world, and also his sexual orientation secret from his coworkers, since homosexuality was still illegal at the time. (This is a situation that Sherlock Holmes would certainly describe as "a three-patch problem.")

It's a tough role, to be sure, and it's based on a real person, which awards voting bodies seem to love. But there's one huge, winged creature standing in Cumberbatch's way: Michael Keaton, and his crazy, return-to-form, almost-meta performance in Birdman. Even if your heart is with Cumberbatch, the smart money is on Keaton. He's already won the Golden Globe (and the Gotham Award, if that means anything), and has been sweeping up trophies and accolades left and right from critics' groups and the like. He's really got his awards-momentum mojo going.

Let's say, for argument's sake, that somehow Keaton's winning streak ends. There's another British bloke Cumberbatch has to contend with: Eddie Redmayne, who plays Stephen Hawking in The Theory of Everything. Redmayne's performance is also acclaimed. He's playing a real person as well, in a role that adds a physical component since Redmayne portrayed Hawking's degenerative disease.

That's not to say the Cumberbabes are totally without hope. The Imitation Game is a Weinstein Company movie, and Harvey Weinstein has achieved greater miracles in the past. (Remember when Kate Winslet won an Oscar for The Reader? Does anyone remember The Reader at all? Weinstein!) But, maybe we should all just be satisfied with the memory of Cumberbatch running up on stage during the Golden Globes and totally throwing Jennifer Aniston off her awards-presenting game. That might be all we get — at least this awards season.