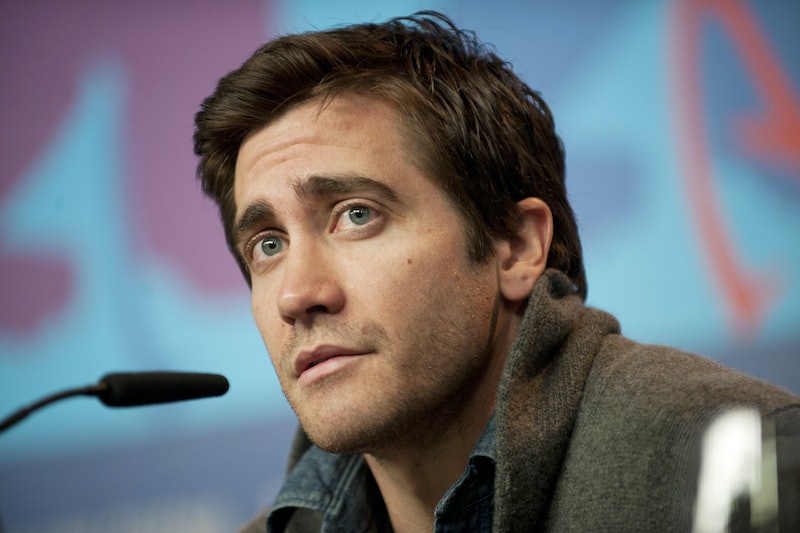 As far as potential celebrity boyfriends go, Jake Gyllenhaal is at the top of a lot of people's lists. And while I haven't been as into him since he inspired one of the most heartbreaking Taylor Swift songs ever and T. Swift is my girl, I can definitely agree he is one attractive male specimen. I mean, look at those eyes. Look at them! They're so blue! So obviously, it's pretty important to keep tabs on Jake Gyllenhaal's current relationship status, since you need to know if it's cool to hit on him if you were to cross paths at, let's say, a cute indie coffee shop or somewhere glam like a movie premiere. Here's the deal: Gyllenhaal is, in fact, single — although the foundation for his next relationship may already be laid.

According to the New York Daily News, Gyllenhaal and his last girlfriend, Alyssa Miller, split in early December 2014 after over a year of dating (and a previous breakup). Word on the street is that he and Miller, a 25-year-old model, split because of his crazy intense training schedule before filming Southpaw. I mean, insane gym hours are to be expected when you're in the process of bulking up to play a boxer onscreen, but is that really a reason to end a relationship? Antoine Fuqua, Southpaw's director, says it was for Gyllenhaal:

Literally, I think he broke up with his girlfriend because he was just in the gym every day. He was training like a fighter. I had him sparring, really getting hit. I put him in situations where I wanted to see what he was made of. No one but fighters understand the sacrifice it takes to be a fighter ... I'm confident that this will change how people see Jake, as a leading man.

And while this is good for Gyllenhaal's already impressive physique (and our eyes), it was not so good for his romance with Miller. The good news? Although Gyllenhaal is currently single, there are rumors that he's already found love again with Ruth Wilson, who's starring in Constellations on Broadway with him. Reportedly, they were "all over each other" and spotted holding hands and kissing at a Golden Globes after-party, which definitely sounds like it's headed somewhere to me. However, this intel comes from Perez Hilton and he occasionally misses the mark, so don't throw in the towel for your potential love affair with Gyllenhaal just yet!

And if you need to get over him, go look at pictures of Andrew Garfield for awhile. That always does it for me.