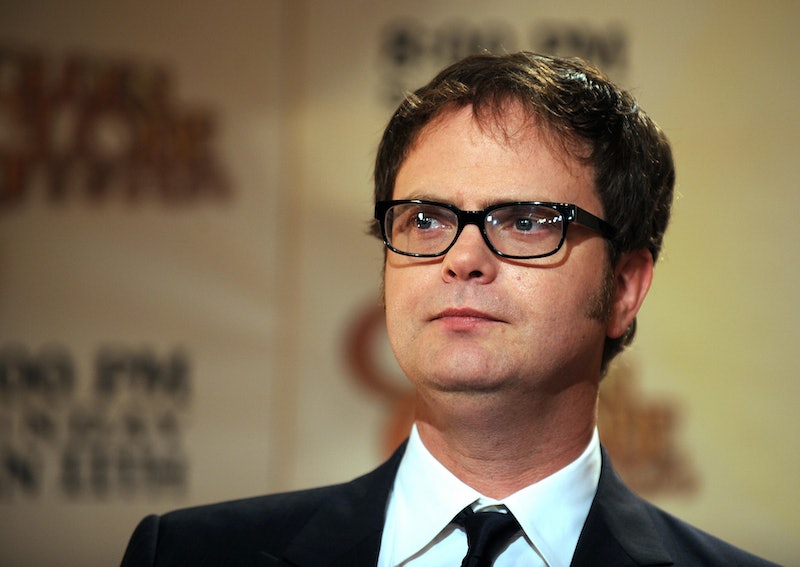 It's official, Rainn Wilson, otherwise known as Dwight Schrute, has agreed that The Office wasn't the same without Michael Scott. When Steve Carell left at the end of Season 7, the show found itself in the tough position of picking up the pieces without its lead character. Wilson spoke with HuffPost Live about the show sans-Michael, and admitted his departure was a big blow to the series.

It was a punch, it was a slam, it was a body blow to lose one of the greatest actors who's ever lived as the lead of your show. It's a really hard thing to survive, and we struggled a lot that next season—brought in James Spader, the chemistry wasn't quite right ... He never really kind of fit in. His energy and the show didn't quite mesh. Obviously [he is] an incredibly talented actor, so interesting, and he had some really cool moments and episodes. But to bring him in, and then Ed Helms was the boss—it got a little wonky there.

But Wilson was adamant that, despite the setback, people shouldn't give up on the show after Season 7. According to Huffington Post, Wilson "approached producers along with Jenna Fischer, John Krasinski and Ed Helms and asked to end the show on a high note after nine seasons rather than letting it slowly 'peter out.'"

Wilson then went on to say, "The last six episodes of The Office were as good as anything we'd ever shot, and truly, truly great television was made. We'd lost a lot of audience, but the diehard fans were with us."

And, as diehard fans will know, not everything in the last two seasons was unwatchable. In fact, these 12 great moments make watching the series to the end totally worth it.

The Robert California Quote About Fear

I didn't always love James Spader on this show, but I did love his quote about Halloween and how we shouldn't let fear hold us back.

And finds out that he's the father of Angela's baby. Not gonna lie, I cried.

Even Tom Hiddleston was a fan of this line.

The Office Coming Together Around Andy's Song

And, in that moment, no one hated their job and no co-workers were fighting; they were just remembering those good old days.

In Season 8, Robert California drafts a list of winners and losers in the office, and he places Pam on the losing side. So Jim makes his own list and it is beyond sweet.

When Jim Comes Back

Jim's all set to leave for his new job, and everyone from Pam to Dwight is sad that he's gone. But then... surprise! He comes back in to finish the office Christmas party and it's a really touching moment.

Everything Jim and Pam, Honestly

They have their ups and downs after Michael leaves. But when they're good, they're really good. John Krasinski and Jenna Fischer have made this show worth watching since the first season and they stayed great throughout the whole show.

The Bond Jim and Dwight Form

With Michael gone, Jim and Dwight actually end up kind of becoming pals. It's this kind of unexpected friendship that I love to watch.

This joke feels very vintage Office and it makes me laugh out loud every time. Jim's face is priceless.

They were such a strange couple, but their love was real and their wedding helped give us the the best finale.

Steve Carell came back in all his glory for the finale and it was perfect.

As much as fans may have disliked the final couple of seasons, there's no denying that the finale was perfect. With so many inside jokes and nods to the past it was a true walk down memory lane. Ultimately, it was an episode for the fans who stuck through the whole thing, and I'm forever grateful.