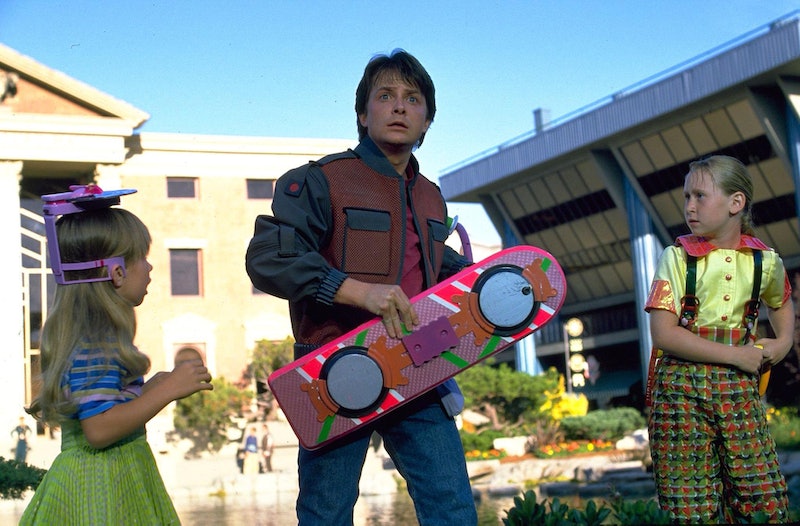 Look, I'm not a very complicated person. There are really only a few things I need in life to be truly happy: Avocados (which I know sounds lame because it's technically a healthy food, but avocados are amazing so be quiet), The National (because Matt Berninger's voice is a gift and should be cherished like the miracle it is), and the Back to the Future franchise, which I firmly believe is one of the most genius film trilogies every created. (I will defend that fact to my grave. Don't test me.) I've been obsessed since the age of 6, and at this point, I'm at full on BTTF freak level. The only thing that would, perhaps, make me even more content in life is possession of a hoverboard like the one Marty rides in the second film, and by content, I mean I could probably die at that very moment and my life would have been completely fulfilled. NO SHAME.

Everyone knows the hoverboard. It made an appearance in the movie's version of 2015 — the year of Marty McFly's journey into the future during Back to the Future Pt. II — and was a full-on '80s imagining of what a futuristic gadget would look realistically look like. Of course, the movie was so wrong: It was all neon and crazy patterns, not the the sleek, modern look that technology really favors today. I don't care, of course, because the idea of a hoverboard is amazing no matter what it looks like and I'll want one forever... I'm just saying:

Of course, since Back to the Future was just a film franchise, you can't serious expect all of its predictions for 2015 to be spot on. Sure, we do have televised calls now thanks to Skype, and old electronics areoften seen in antique stores as depicted in the film. But, what about the hoverboards? It's the most iconic gadget from Back to the Future Pt. II's 2015, and yet — as hard as I try — I still can't find anywhere to buy one. What gives, 2015? This magical gadget has to exist by now, right?

Obviously, being the journalist I am — dedicated to finding the answer to any and every question in the universe — I had to investigate. Does Back to the Future Pt. II's hoverboard really exist? Do I need to get a life?

Well, guys, do I have some news for you. You called me crazy. You called me obsessed. BUT THIS CHANGES EVERYTHING. Because yes...the hoverboard is real.

OK, technically, it's not available for purchase or anything. But, my point is, the technology has been kind of invented, and it's actually been around since 2014. It's reportedly all thanks to a company called Hendo, which is where engineers were able to design hoverboard with technology that allows it to surf about 1 inch above the ground, given the surface of said ground is metal. Apparently, it works with magnets, and it can support the weight of a human being.

IN OTHER WORDS, IT'S REAL. Back to the Future Pt. II actually got this one right, guys.

Even better: During December 2014, the company was Kickstarting the project to raise funds to actually mass produce the thing, as well as create a specialized "skate park" where people can use the hoverboards to their hearts desire. (Of course, they not only raised enough to meet their goal, they raised double it.) I think I just died a little inside from all this excitement.

Further proof: In November 2014, Hendo released a video of Tony Hawk riding one:

Of course, there's no word on when these hoverboards will actually be available. But, the point is, it's 2015 and hoverboards are technically a real thing — just like the movie said. Case closed, everyone! Now, if technology could focus on creating those self-lacing Nikes that Marty rocked while riding the hoverboard...I think everyone's lives would truly be complete.