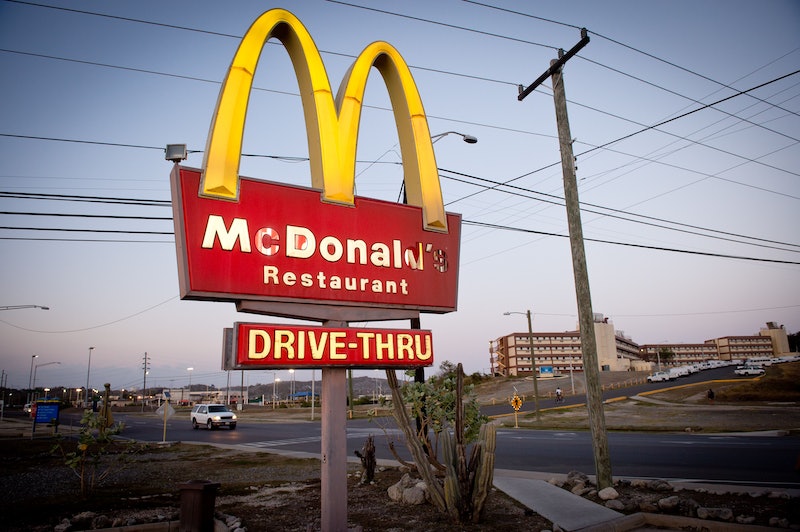 McDonald's recent ad campaign focusing on community suddenly feels very ironic. The fast-food chain became the subject of a new lawsuit on Thursday — one leveling some serious accusations. Ten former employees in Virginia are filing a federal civil rights lawsuit against McDonald's, claiming they were fired based on their race. They allege that their supervisors had made racial and sexual slurs and fired them because they "didn't fit the profile" of ideal employees, which the plaintiffs say is just a nicer way of saying the stores had "too many black people."

All 10 employees in the lawsuit were let go in May 2014. One plaintiff and former staff member, Willie Betts, told the Guardian that even though they were told they were good employees, they were let go anyway.

All of a sudden, they let me go, for no other reason than I "didn’t fit the profile" they wanted at the store. I had no idea what they meant by the right profile — until I saw everyone else that they fired as well.

Of the 10 fired workers, nine are African-American and one is Hispanic.

Other plaintiffs noticed even more alarming evidence that substantiates their civil rights suit. The employees say they overheard their supervisors saying they "need to get the ghetto out of the store," "get rid of the n-ggers and the Mexicans," and that there were "too many black people" at the locations. One female plaintiff, Katrina Stanfield, said that her supervisor touched workers inappropriately and had sent them naked pictures of himself.

When the workers filed a complaint with McDonald's corporate headquarters, they were essentially turned away, according to the filing. One plaintiff told the Guardian:

McDonald’s closely monitors everything we do, from the speed of the drive-thru line to the way we smile and fold customers’ bags — but when we try to tell the company that we’re facing discrimination, they ignore us and say that it’s not their problem.

The plaintiffs filed their lawsuit on Thursday morning in the U.S. district court for the western district of Virginia against McDonald's Corp., McDonald's USA LLC, franchise Soweva Co., and its owner Michael Simon, who oversaw the three franchises where the employees worked.

While McDonald's sets certain standards for franchises, they generally let franchisees decide how to enforce employee policies, such as wages, scheduling, hiring, and firing.

McDonald's, who said it will comment further after it's seen the lawsuit, issued the following statement on Thursday:

McDonald’s has a long-standing history of embracing the diversity of employees, independent franchisees, customers and suppliers, and discrimination is completely inconsistent with our values. McDonald’s and our independent owner-operators share a commitment to the well-being and fair treatment of all people who work in McDonald’s restaurants.

McDonald's and other companies have long dodged liability by separating their corporate entities from their franchisees, but that could all change now. Last month, the National Labor Relations Board named McDonald's Corp. and its franchisees joint employees when filing complaints against them for labor violations. That means that the corporation could be held liable for any violations committed by its independent franchisees — violations such as racial discrimination and sexual harassment.