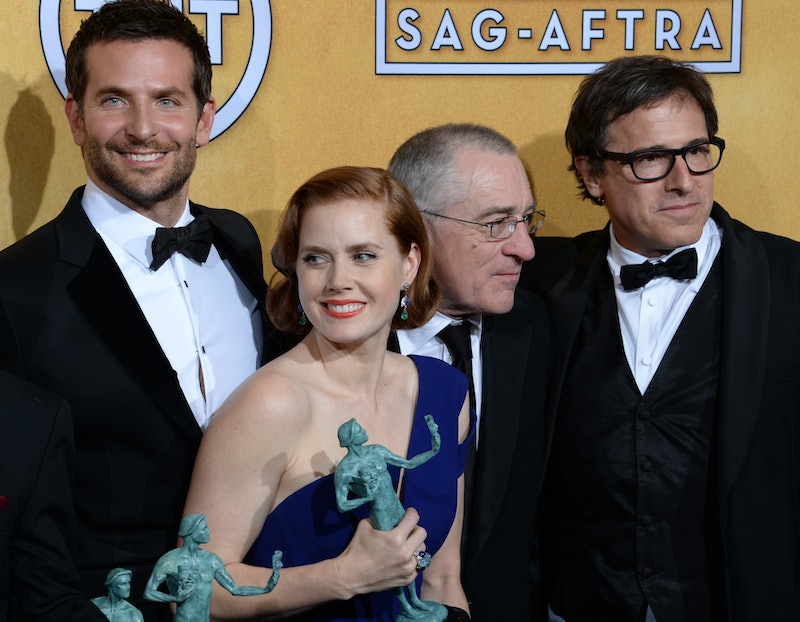 Are you excited for the 2015 Screen Actors Guild Awards this Sunday? It's not as flashy as some of the other ceremonies, but the concept behind it is really cool — because really, who better to dole out awards than the thousands-upon-thousands artists of the Screen Actors Guild? The whole cool actors-for-actors thing is even reflected in a lot of winners' speeches — some talk of the lean years of their early career failures, others reminisce about how they first got their SAG card (perhaps most memorably, Jennifer Lawrence told the world she earned hers by starring in a couple My Super Sweet Sixteen promos). In a nutshell, the SAG Awards are not to be missed... and in order for you not to miss them, you're going to want to know what channel the SAG Awards are going to air on.

There's just so much to look forward to — to be honest, I'm particularly excited to watch the red carpet proceedings (it was last year's SAGs where Lupita Nyong'o wore what was arguably the best dress of the awards season, after all). Anyway, as it turns out, this year SAG Awards fans are in major luck — because the award ceremony will be airing on not one but two channels.

Tune In To TBS and TNT

It is on both channels, after all... Why not switch it up and do a little channel surfing? Apparently, in 2013 SAG made a three-year contract with both networks, in order to reach a larger viewership — and how, exactly? Let's break it down.

TNT tends to draw a more serious crowd — which makes sense, as they air primarily dramas. According to SAG's website, the 2013 SAG Awards pulled a viewership of 2,952,000... not too shabby, eh?

TBS, as you would guess, is a channel more geared towards comedy fans (it's home of Conan and Cougar Town). They had a smaller viewership than TNT in 2013, with SAG's website reporting 2,295,000 viewers. But hey — that's not too bad either.

So there you have it — it's really up to you. They're simulcast, both airing at 8 p.m. ET, so I guess it just comes down to your commercial preference, which actually makes a pretty big viewing difference, when you think about it.

More like this
Hannah Khalique-Brown Has Her Sights Set On 'Strictly'
By Frances Stewart
'The Undeclared War' Spotlights The Real-Life Threat Of Cyber Attacks
By Maxine Harrison
'The Undeclared War' Took Inspiration From This Gavin & Stacey Location
By Maxine Harrison
What’s New On Netflix: 'Stranger Things' & 'Mean Girls'
By Arya Roshanian
Get Even More From Bustle — Sign Up For The Newsletter