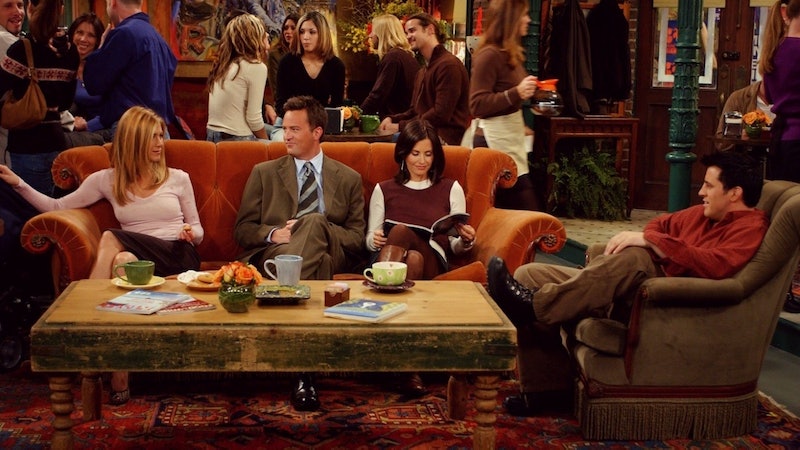 With some TV shows, the location of the series barely matters at all. Take Grey's Anatomy, for example, which is set in Seattle but rains infrequently enough to make a casual viewer think it's Las Vegas. Parenthood supposedly takes place in Berkeley, yet save for Drew's college and Kristina's mayoral campaign, nothing about the area resonates with its Prius-driving, jeans-wearing residents. Yet for some series, location is everything — like the New York-set Friends , for example, which wouldn't be even close to the same show without The City as its setting.

The cafes! The rent! The buskers shouting in your face while you're just trying to eat your meal! Friends is New York, which is why it's so fascinating to imagine the series set somewhere else — say, Boston, for instance, which, residents know, is about as different a city from New York as it gets. What would the show be like if its characters lived in Southie instead of Soho? Would viewers need subtitles to be able to understand their accents? And, most importantly: where would they go for coffee? Below, what I imagine Friends might be like if it took place in Beantown:

The Apartments Would Still Be Huge — But They'd Live in Allston

Although Boston is not that much cheaper a city than New York, the apartments can often be a lot more spacious, depending on what area in the city you live. Monica could still believably have her massive home, but she'd probably be living somewhere like Allston — and if that was the case, we'd surely be hearing the noise from frat parties and celebrating Allston Christmas in at least a few episodes.

They'd Always Be Stuck on the Train

Unless any of the group lucked out and lived in Cambridge, most likely they'd be commuting by Green Line. And as any Boston resident knows, the Green Line is the slowest, most crowded, and — let's be honest — grossest route there is. Yet plenty of Bostoners take it each day, and the Friends gang would certainly be included.

Rachel Would Work on Newbury Street

Unlike New York, Boston is not exactly known for its fashion. Still, there is Newbury Street, home to plenty of high-end boutiques like Marc Jacobs, Chanel, Kate Spade and... Ralph Lauren. Chances are, Rachel would be working the same job as her New York-self, but due to the decline in culture the moment she left the street, she'd probably be miserable.

Monica and Chandler Would've Had to Reconsider Their Move

"You want to move to Westchester?! In New York? Are you INSANE?!"

They'd Get Their Coffee At Dunkin'

We all love Central Perk, but in Boston, it'd be replaced no question by Dunkin' Donuts. Maybe it's not as cozy, but it sure is cheap — and, as Bostoners will attest, pretty damn good.

"The One With the Football" would have a whole different meaning if it involved the guys obsessing over their mutual man-crush on the Patriots QB.

Phoebe's Winter Wedding Could Not Have Happened

Think New York winters are cold? Try Boston, where the snow, plus the wind, plus the insanely low temperatures, would make any street wedding — no matter how many coats Chappy wore — totally insane, if not impossible.

No One Would Understand Joey

Joey lives in Boston. Joey is an actor. Joey is required to use a heavy Boston accent for a role, and because he is Joey, this leads to disaster. Why doesn't he use his normal voice? Why can't Phoebe teach him to stop saying "pahk?" No idea, but I can picture the episode now, and I'm laughing already.