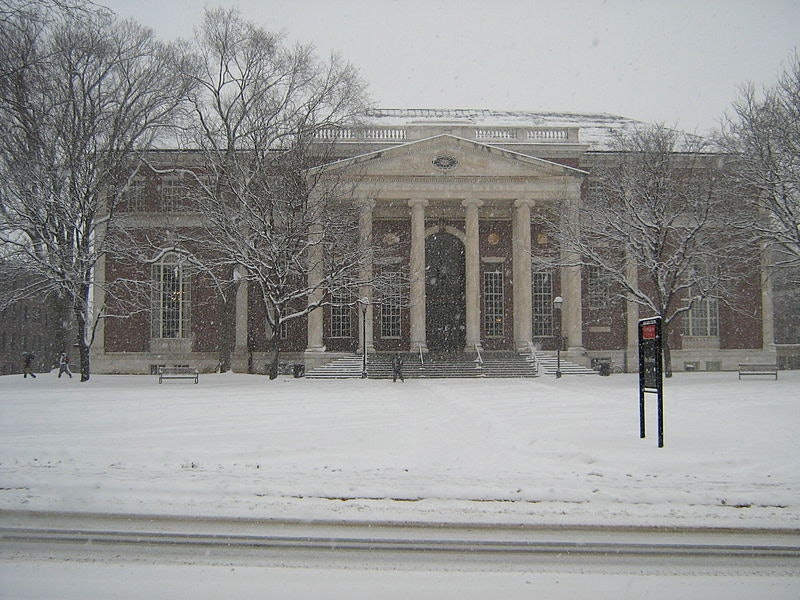 The Beta Theta Pi fraternity at Wesleyan University—which is being sued by an ex-undergraduate who was raped in its frat house—filed a motion last week insisting the victim either broadcast her identity, or drop the charges.

The plaintiff has so far been referred to as "Jane Doe." At a 2010 Halloween party at the frat house, the young woman—an undergraduate at the time—was raped by one of the frat's guests: a non-Wesleyan student named John O'Neill. At trial, O'Neill plead "no contest", and was put behind bars for 15 months.

The victim ultimately dropped out of the private college, and filed charges against the fraternity chapter, its Beta organization, and the university. Wesleyan, she claims, didn't warn students about the fraternity house (which, according to her, was nicknamed the "Rape Factory"), didn't stop the harassment and aggression she faced on campus after being identified, and "acted with deliberate indifference towards the rights of Jane Doe and other female students to a safe and secure education environment."

Last Tuesday, the fraternity's attorneys filed a motion demanding that Jane Doe identify herself. According to the frat's lawyers, she's been making "defamatory statements" behind a "cloak of anonymity." Wesleyan originally told students to avoid the frat house—which hasn't been officially recognized since 2005—and once the victim's name surfaced, she became the key target of protests against the warning.

The report is of course part of a larger debate about identifying sexual assault victims. Last September, a Californian high-schooler killed herself after her classmates allegedly saw photos of her sexual assault. A Canadian teen, who was reportedly viciously bullied after photos emerged of her being gang-raped, committed suicide last April. That said, a study emerged last year suggesting that the wrongful rape conviction rate—thought to hover around three percent—is actually much higher, between 8 and 15 percent.

More like this
The Most Powerful Photos From The Weekend’s Abortion Rights Protests
By Melanie Mignucci
The Families Of Grenfell Tower Are Still Waiting For Justice, Five Years On
By Bustle UK
5 Concrete Ways To Take Action Against The Rwanda Deportation Plan
By Rachel Mantock
34 Quotes That'll Inspire You On Juneteenth & Beyond
By Syeda Khaula Saad and Siena Gagliano
Get Even More From Bustle — Sign Up For The Newsletter