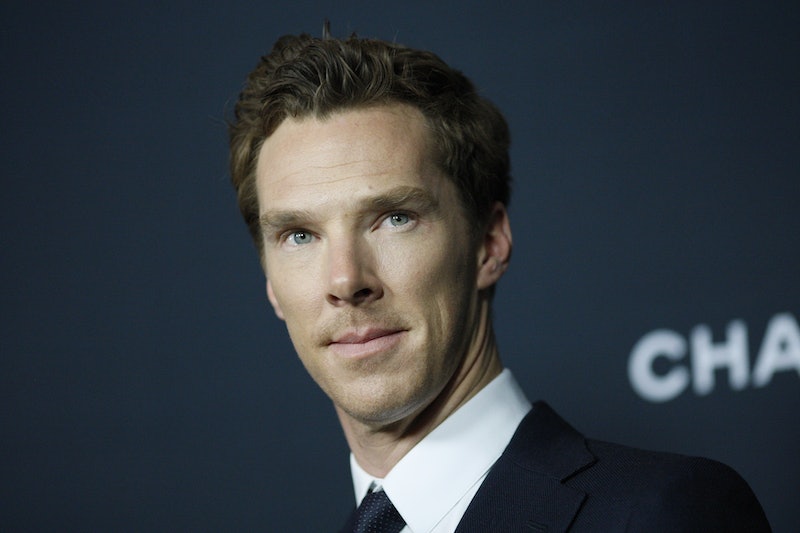 While you and millions of others around the world may find Benedict Cumberbatch to be an Internet hero and undeniably sexy, it turns out that the man himself may disagree: In a new interview, Benedict Cumberbatch said he believes his appeal is entirely thanks to the allure of Sherlock, and his portrayal of Sherlock Holmes. Say wha?!

"It's a projection of work, and that's why you're right to ask the question about whether Sherlock is sexy, because I sure as hell ain't," Cumberbatch told Hollywood Reporter recently. "And I've been around for 10 or 15 years before this happened and I wasn't on any lists of the millionth most attractive."

While I'm sure there are tons of fans who would beg to differ to Cumberbatch's statements, this assertion does bring up an interesting conundrum: Is it Sherlock that actually makes Cumberbatch sexy? Who, in fact, is sexier: Benedict Cumberbatch or Sherlock Holmes?

Holmes, of course, is one of the most iconic characters of our time, and is on the level of James Bond, Batman, and Dracula in terms of name recognition — but Cumberbatch has that too, in a way, as a cult icon whose every move is practically worshipped on Tumblr. Personally — and I hope the Cumberbitches will forgive me — I don't find Cumberbatch particularly attractive in real life. But that said, in the guise of Sherlock Holmes, I absolutely get the appeal. Hmm...

As a journalist and an investigator, I'm looking to get to the bottom of this — one of history's toughest questions ever— as objectively and intellectually as I can. It's what Holmes would want! So, allow me to present a few cases, so we can better deduce who wins when it comes to sexiness:

Personally, I'm of the belief that Cumberbatch has a strange appearance — but I have to admit, he has some interesting qualities. Nice swoopy hair, a pallor I can get behind, and I can't even begin to explain how much I appreciate an oddly-long physique. However, Holmes has been played by so many dashing men in the past, from John Barrymore to Peter O'Toole to Christopher Plummer to Robert Downey Jr.! That's an extensive list of men to compete with... so I'm going to have to give the point to Holmes on this one.

The easiest way to my heart is to make me laugh, and Cumberbatch did just that when he photobombed Meryl Streep. Case closed.

Nobody's doubting that Cumberbatch is a brilliant actor (hello, The Imitation Game!) but come on, guys. Sherlock is renowned for his skills, and he's been the best in his field for over a century now.

So we're at deadlock here. How on Earth will we solve this? Well, allow me to present one final case. A tiebreaker, if you will:

In the original Sherlock Holmes canon — that is, the original Sir Arthur Conan Doyle stories — the only woman that truly admires Holmes is Irene Adler, and "admires" is as far as it gets. Romance is simply not on his agenda. And, yes, you could write smutty Watson/Holmes fanfiction all you want (many do, and they should never stop) but there's nothing to assert in the earliest text that they're having any clandestine affair. The dirtiest secret about Holmes is that, despite the swagger brought onto him from the likes of Downey Jr., Miller, and yes, Cumberbatch himself, Holmes is kind of a sexless agent. He is the Morrissey of detectives: He's attractive, honest, brilliant and British, but good luck getting to the actually sex part with him.

Therefore, it's amazing that Cumberbatch brings sex appeal to this otherwise sexless character, and, in doing so, has created a powerful legion of fangirls. This feat is only more impressive when you consider the fact that he is certainly unconventional-looking. (Not to mention, when he makes his own Sherlock fanfiction, it's almost smuttier than yours, and that's both hot and impressive.)

Doyle gets credit for creating one of the most iconic characters in history, but Cumberbatch gets credit for reinventing him and for assigning him with all these characteristics that make him oh-so-attractive. Despite his assertion, it's in fact Cumberbatch who's makes Sherlock sexy, not the other way around: So Cumberbatch definitely wins this one. When you really think about it, it's all very elementary.