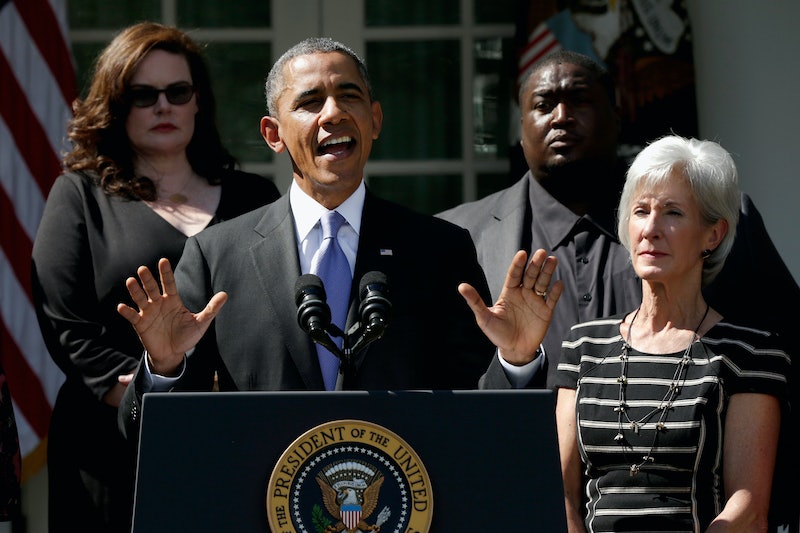 As the government remains shutdown as a result of the Republican-led House and Democrat-heavy tug-of-war over the Affordable Care Act, Obama spoke again about the crisis Tuesday afternoon. He reiterated the administration's commitment to Obamacare and his staunch opposition to the GOP's tactics, declaring that the healthcare exchange had seen over a million online visitors between midnight Monday and 7 a.m. Tuesday, and that his reform would be dramatically positive for the overall health of the nation.

"I will not give in to reckless demands by some in the Republican Party to deny health care to millions of Americans," the president said. "Pass a budget," he advised Congress. "End this government shutdown."

Obama has a lot to lose from government shutdown: Washington alone is losing hundreds of millions of dollars for every day the government remains on hold, and the economy could theoretically be plunged back into a financial crisis if it continues. To make his point, the president ushered a diverse group of Americans he claimed would benefit from the reform onto the stage, and said: "These are the Americans you would hurt if you dismantle this law." Those who were able to have insurance, he claimed, were almost three-quarters more likely to survive cancer.

Certainly, Congress needs a remedial lesson on compromise. The federal government shut down just past midnight last night after weeks of uncertainty following House Republicans' unwillingness to pass a clean budget bill. The Senate and the President rejected their efforts to attach a delay in the implementation of Obamacare to the federal budget. On Tuesday morning, the Democratic-controlled Senate refused to discuss a stopgap bill with the Republican-controlled House, prolonging the stalemate.

Now, one million federal employees must work without pay today while an additional 800,000 are furloughed until further notice. “You don’t get to extract a ransom for doing your job,” President Barack Obama said shortly after midnight. He also said that he "will not negotiate" about the budget.

As Bustle reported last night, the president accused Republicans of caving to fringe members of their party, and reminded them that the Affordable Care Act “is a law that passed both houses of Congress, a law that bears my signature, a law that the Supreme Court upheld as constitutional, a law that voters chose not to repeal last November.”

The shutdown "could test voters’ patience with Republican brinkmanship," the Times reports — something that seems to have already happened, seeing as Congressional approval is hovering around 10 percent.

But though federal employees are getting the short end of the stick today, the markets reacted to the federal shutdown with a collective shrug. The inched slightly upward around the world, apparently heartened by a growing Japanese economy. Experts, though, worry about what will happen a few weeks down the road, when the federal budget fiasco is expected to repeat itself during the debt ceiling debate. Though Senate GOP members have agreed to pass a clean budget to keep the federal government operational — after Ted Cruz's now-infamous filibuster, but still — they have not ruled out putting the debt ceiling on the line to get what they want.

Congressional approval levels are now, ironically, much, much lower (10 percent, according to CNN) than they are for the law they're trying to delay (and eventually, kill). A Kaiser Family Foundation poll showed that only 37 percent wanted to defund Obamacare, while a CNBC poll put that number at a much-lower 19 percent. (And, while the government comes to a screeching halt, the health care marketplaces open today.)

Many are putting the blame for the lack of compromise on Republican Speaker of the House John Boehner, who, though often regaled as a smart politician, has been unable to keep unruly Tea Party Republicans in line. "[A]s with most temper tantrums, you can’t simply blame the kids acting out. You also need to blame the grown-up letting it happen. That means House Speaker John Boehner," Jonathan Cohn wrote, adding that Boehner needs to use a bully pulpit to restore order to the GOP.

Meanwhile, Senate Majority Leader Harry Reid said House Republicans have "lost their minds" and are trying to bully the federal government into getting what they want. “You know with a bully you cannot let them slap you around, because they slap you around today, they slap you five or six times tomorrow,” Reid said.

Today we're in for another day of uncertainty. Theoretically, the budget can be passed as soon as Tuesday, and the House voted to go into conference over the spending bill Monday night. Check back throughout the day for more updates.

The president also prepared a video to be shown to members of the armed forces in the event of a government shutdown:

At the end of Tuesday's speech, Obama said that he would speak more about the crisis "in the coming days." Last time a government shutdown occurred, in Clinton-era 1995-6, it lasted more than three weeks.