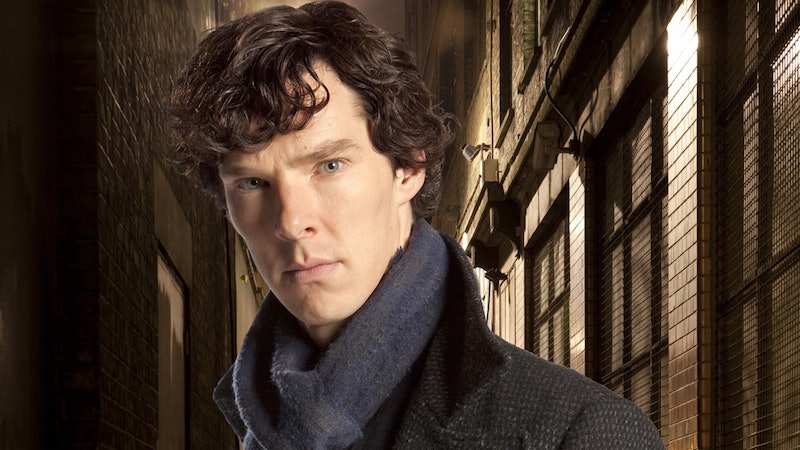 Our number one super sleuth is back at it again — and this time he's dressed in Victorian garb! That's right, my friends — as promised, production is now officially underway for Sherlock 's one-off special, which finds our favorite crime-solving duo looking quite debonair in their period frocks, courtesy of a few delightful set photos that were set upon the Twiterverse (see below). And it's really everything we could ever hope for and more. Benedict Cumberbatch dons that iconic deerstalker cap while Martin Freeman is back to rocking out that Season 3 stache. (Stop trying to make mustaches happen, Watson!) Seriously, we've never seen these boys look quite so Sherlock-ian before, but I gotta say, I kind of love it.

Not that I didn't already think that anything this series produces would be incredible, of course. (Lesser notions would be simply elementary.) However, it's nice to confirm all the same and see firsthand that more sleuthy shenanigans are well underway. But dapper clothing aside, there's still a lot to take in from all of these images, which were captured at the Gloucester Cathedral in Britain. So, for fun (and because I will seriously make up any excuse to talk about this show), I've provided my own personal captions for the photo embeds below to try and help determine what these characters could possibly be thinking at this point in time. Enjoy!

This coat gives off a rather fantastic breeze!

Do you think Watson knows how ridiculous he looks with that mustache?

Now where did I park my horse?

Still not sure if I'm wearing this hat right, to be honest…

Sherlock: I deduce that we are adorable.

Like I said, it's all pretty fantastic. And while these photos honestly don't give too much away (nor would we want them to), they'll all make for very nice additions to our own personal mind palaces. The game is on!