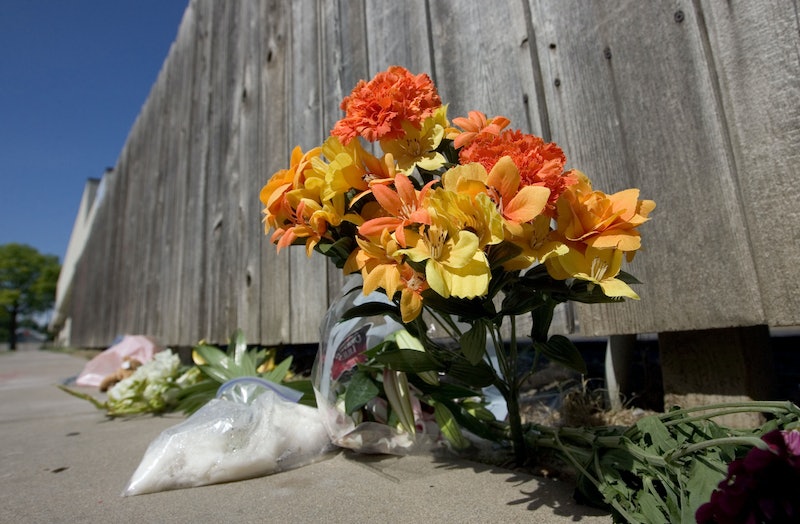 In 2012, then 41-year-old Bobby Joe Rogers threw a Molotov cocktail into the American Family Planning Clinic in Pensacola, Florida, completely destroying the facility. The clinic, no stranger to anti-abortion violence, was previously bombed in 1984, and was the site of the double-murder of a doctor and his security detail by yet another anti-abortion activist. These acts of domestic terrorism remain a scourge on our national identity, and according to the most recent National Clinic Violence Study, a shocking 20 percent of clinics still report experiencing "severe violence," including arson, bombings, chemical attacks, and gunfire. Even more concerning, since 2010, the proportion of healthcare professionals at these facilities reporting targeted threats and intimidation has doubled.

The history of anti-abortion violence in the United States is one that is rarely discussed, and too often justified by way of freedom of speech and expression. But since the 1980s, when anti-abortion reached its ugly zenith in the decade following the Roe v. Wade decision, acts of extreme intimidation have not been stymied, and have rather been exacerbated in more recent times. Since 2005, abortion clinics have reported continuously increasing levels of "targeted intimidation of and threats against doctors and staff," representing a disturbing national trend that seems to suggest that women's bodies are at the mercy of otherwise unaffiliated, seemingly unconcerned parties who demonstrate little concern for the safety of the mothers in question.

The cultural and political landscape inhabited by the 21st century woman is not one that is conducive to freedom of privacy, the fundamental right upheld by previous Supreme Court decisions — rather, the continual defense of individuals who infringe upon a woman's right to choice and her own body perpetually sends a disturbing message that females are, by default, beholden to the whims of others. According to one recent study, 7 percent of Texan women attempted to self-abort because it was "too difficult" to obtain access to a clinic. Furthermore, recent laws implemented by Texas legislature further reinforce the notion that women have no say over their pregnancies. Under the pretense of making abortion clinics "more safe" for women, legislatures are instead slowly but surely chipping away at a fundamental right to choose.

The stigma against abortion is not only manifested on Capitol Hill and state legislatures. Rather, according to the Feminist Majority Foundation, an astounding "67.8% of women’s health clinics nationwide experience frequent and regular anti-abortion activity," much of which serves to detain women from obtaining the necessary healthcare and procedures to best serve themselves and their unborn children. Moreover, the use of guilt tactics in order to persuade women to shy away from abortion has increased significantly in the last four years, demonstrating a marked turn towards intimidation as a strategic decision.

Between 2010 and 2014, for example, the Feminist Majority reports an increase from 19 to 27.9 percent in the distribution of fliers displaying messages including "KILLERS AMONG US" and "WANTED" that featured images of healthcare workers affiliated with abortion or otherwise pro-choice clinics. Moreover, with the advent of social media networks like Facebook and Twitter, and the continued rise in importance of the Internet, "the reported incidence of clinic staff’s information and pictures being posted on the internet increas[ed] from 8.9 percent in 2010 to 17.8% in 2014."

In a day and age when women are meant to be shattering the glass ceiling and establishing new standards for themselves beyond the sometimes stifling titles of "wife" and "mother," this continued occurrence of anti-abortion violence is simply unacceptable. That "the percentage of clinics impacted by targeted threats and intimidation increased from 26.6 percent of all clinics in 2010 to more than half of all clinics in 2014, or 51.9 percent" is not only embarrassing, but also particularly debilitating for women who are well-aware of their options and the significance of autonomy in bringing another life into the world.

Most notably, while clinics as a whole have not been targeted to the same extent as they have in the past, healthcare workers who seek to maintain a woman's right to choice have become the quintessential scapegoats for such acts of violence. Indeed, as per the 2015 report,

Beginning in the early 1990’s, an undeniable pattern emerged between the use of WANTED posters and the murder of the doctors named on the posters. Drs. Gunn, Britton, Slepian, Patterson and Tiller were all murdered by anti-abortion extremists; all had been featured prior to their murder on WANTED posters with their home and clinic addresses and in some cases, their photographs.

Simply stated, the danger that accompanies an alliance to a woman's right to choose is undeniably unacceptable. The movement against abortion is not motivated by legitimate medical reasoning, but rather antiquated political assumptions that seem to align the acceptance of choice with child murder, an opinion that is as juvenile as it is unfair. According to Dr. Willie Parker, who MSNBC describes as "a highly accomplished and well-regarded ob-gyn," his duty as a physician is of paramount importance because "their lives are on the line," and his own well-being is superseded by that of his patients. Unfortunately, this is not an opinion shared by anti-abortion activists, who continue to make death threats against him and his family, and have persistently threatened his livelihood and his medical license.

The continued stigma against abortion and pro-choice activism that has been perpetuated across the last decade is as dangerous for women today as it is for our daughters and sons — when any single human being is unilaterally denied autonomy over their own bodies, there is a severe infringement upon personal rights, and the violation of such a significant tenet of our freedom and independence above all else is cause for intense concern. That freedom of choice remains such a salient issue well into the 21st century is absolutely ridiculous, and the violence that continues against those who attempt to make abortion procedures safe and accessible for women everywhere is rather mortifying.

Naturally, the Clinic Violence Survey revealed that "a strong, positive relationship with law enforcement continues to be crucial for abortion clinics threatened by violence and harassment." Indeed, facilities most at risk for violence had the least reliable relationship with local police forces, whereas those most secure in their positions could reasonably rely on police support to ensure their safety. But it is not simply the presence of law enforcement that should encourage confidence amongst men and women who work tirelessly at clinic across the country — rather, it is the work of ordinary citizens who stand up for women's rights who should be called upon to ensure that such a basic right is ensured regardless of age, ethnicity or location.

Our inhabitance of the 21st century has not ridden us of some distinctly antiquated notions of femininity and women's rights. This is a problem, and one that is addressed head-on far too infrequently. Anti-abortion violence and freedom of choice should no longer be up for debate in our modernized society, and it is our responsibility as active members of our community to stand up for our rights. So don't allow for the next Bobby Joe Rogers to throw a Molotov cocktail — protect our women and our progeny, and stand against anti-abortion violence.

More like this
24 History-Making Black Women You Probably Didn't Learn About In School
By Ayana Lage and JR Thorpe
Here’s Where The NHS Nurses’ Strike Currently Stands
By Sophie McEvoy
6 Organizations Fighting Police Brutality That You Can Support Right Now
By Syeda Khaula Saad and JR Thorpe
Kim Petras Just Made Grammy History
By Jake Viswanath
Get Even More From Bustle — Sign Up For The Newsletter
From hair trends to relationship advice, our daily newsletter has everything you need to sound like a person who’s on TikTok, even if you aren’t.