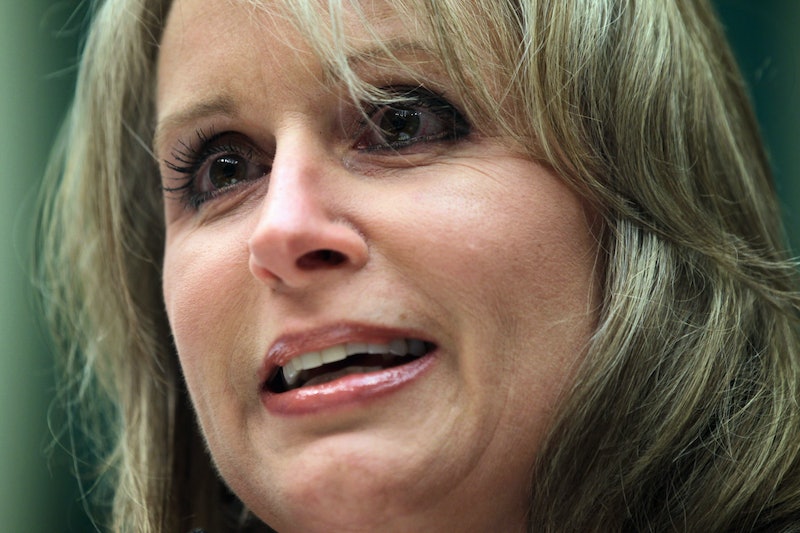 Rep. Renee Ellmers was in the headlines this week because the North Carolina Republican wavered on her support for an anti-abortion bill that would have banned abortions after 20 weeks, unless necessary to save the life of the mother, or in cases of rape or incest. It also included a requirement that women report their rapes to police if they wanted an exemption from the 20-week cutoff. She was one of a few congresswomen who urged the party to reconsider voting on the bill, but her actions might have bigger consequences than she expected — social conservatives are furious with her, and it has us wondering — who exactly is Renee Ellmers?

President Obama had threatened to veto the bill, but late Wednesday, Republican leaders in the House canceled their scheduled vote on the Pain Capable Unborn Child Protection Act. Ellmers led the charge in the House to scuttle the vote, which was extremely ill-timed to coincide with the anniversary of Roe v. Wade. She told her colleagues they needed to “be smart” and avoid jeopardizing the support of millennial voters.

I want to tell you … we are very upset with Renee. We are going to make sure someone else takes her seat in 2016. We are not going to put up with these shenanigans. She cratered a big pro-life victory today.

Ellmers tried to backtrack at the eleventh hour, tweeting Wednesday night that she would be supporting the bill after all.

Before this week, Ellmers might have been best known as the incumbent who defeated Clay Aiken in his run for Congress in North Carolina, and who made thinly-veiled homophobic slurs against Aiken and his "San Francisco values" when the campaign was barely hours old.

Oddly, Ellmers also made some pretty sexist comments during the campaign. According to a report from the Washington Examiner, Ellmers said during a panel discussion about women in the GOP that male colleagues needed bring the discourse "down to a woman's level" so that feeble lady brains could understand all those big words:

Men do tend to talk about things on a much higher level. Many of my male colleagues, when they go to the House floor, you know, they’ve got some pie chart or graph behind them and they’re talking about trillions of dollars and how, you know, the debt is awful and, you know, we all agree with that. … We need our male colleagues to understand that if you can bring it down to a woman’s level and what everything that she is balancing in her life — that’s the way to go.

It's probably better that feminists don't get too attached to Ellmers for stopping the vote, as it looks like she only considered how anti-abortion legislation might actually affect women only in terms of how it might cost votes, not out of some newfound sense of sisterhood.

And the bill the House Republicans passed today instead, H.R. 7, would permanently ban federal funding for abortions. Ellmers was all over it, voting in favor.

Before this week, Ellmers' voting record and stance held close to the Republican party line: She's anti-immigration, pro-Keystone XL pipeline, and pretty much opposed to President Obama in general.

So though Republicans want to blame Ellmers for helping stop a vote on one anti-abortion bill, don't expect to see that kind of thinking from her in the future. Hopefully North Carolina voters will help her solve the problem she seems to have making up her mind by not reelecting her again.