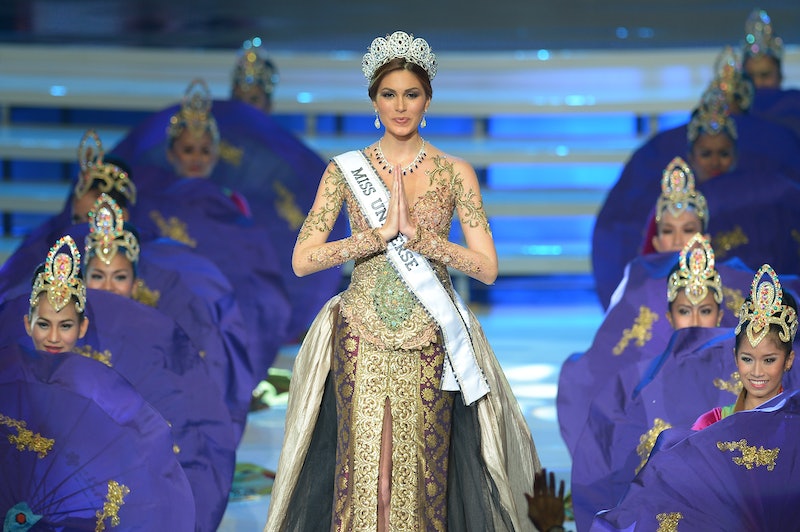 Outside of the occasional episode of Toddlers and Tiaras and hearing my best friend talk about the days she competed for Miss Alabama, pageants are totally foreign to me. Don't get me wrong — I really get into watching them, but I would never want to compete in one. There's something really uncomfortable about standing on stage in front of millions of viewers in a bikini. And then there's the part where there are a million of these pageants and I can barely keep them straight. Miss America and Miss USA often get mixed up, despite the fact that they're two totally different programs with totally different mission statements. The same goes for Miss Universe and Miss World. You'd assume they're pretty alike, since it's not like Miss Universe can include contestants from other planets or anything, but they're actually surprisingly different, as far as the culture of pageants goes, anyway.

And it comes down to way more than just the fact that Donald Trump calls the shots at Miss Universe and not Miss World. They're run by two organizations that have nothing to do with each other.

Like Miss USA, Miss Universe originally started as a marketing campaign for Catalina Swimwear in 1952... which means that Miss USA (this year's winner is Nia Sanchez) competes in Miss Universe after she's crowned. As for Miss World? That's a different pageant system, and Miss World United States (Elizabeth Safrit is 2014's) is the one we send to compete. Another subtle difference? 120 women compete in Miss World, while only 80-100 worldwide winners compete in Miss Universe.

They Have Similar Restrictions

And they all have to do with sex. Neither Miss Universe nor Miss World can be (or have ever been) married, and neither titleholder can have children. Um, it's 2015. This is so not OK, pageant overlords.

The Judging Is Totally Different

The Miss Universe breakdown is pretty simple: Contestants are judged on evening gown, swimsuit, and personality — with no talent portion. Miss World is quite the contrary, judging contestants on categories like interview and each hopeful's Fast Track category, which includes Sports, Talent, Beach Beauty, Top Model, and Beauty With a Purpose.

The Winners Take on Different Locales

The winner of Miss Universe will spend her reigning year doing press and making appearances around the world, but she'll take up residence in New York the year she serves. Miss World's winner typically lives in London after she takes home the crown as part of her prize.