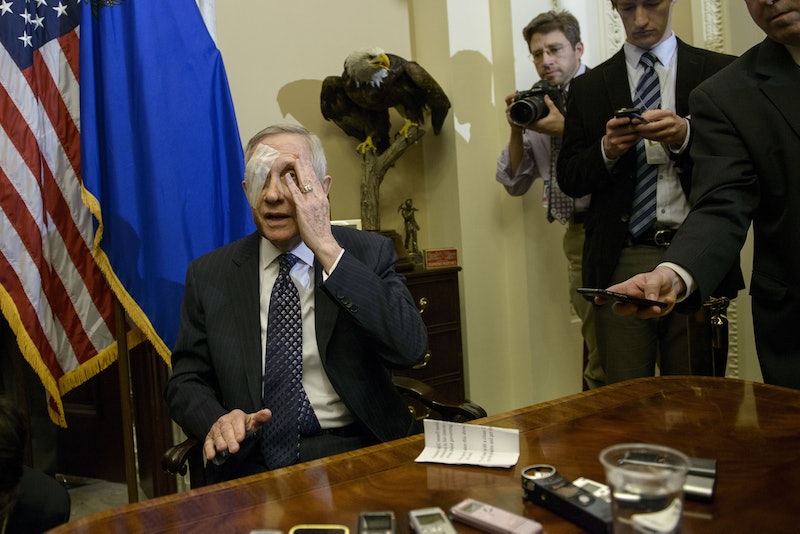 On Thursday, Sen. Harry Reid outlined details of the surgery he will undergo next week, which will drain blood from his eye (yeeeesh). The 75-year-old Nevada Democrat broke a number of ribs and bones during an exercising mishap on New Year's Day, but was his feisty self during his first media appearance since his fall.

At a press conference outside his Senate office Thursday, Reid told reporters that doctors will be moving a bone currently pressing against his eye, and will drain the blood that has pooled around it, causing blindness on his right side, Politico reported.

Reid was hurt when an elastic band he was using snapped, striking him in the face and causing him to fall. Asked if he planned to pursue legal action against the manufacturer of the band for possible equipment malfunction, Reid wouldn't rule it out.

"Let's say if I were, I wouldn't be broadcasting it here," he told reporters.

Despite the grim-sounding surgery and obvious injury he suffered, Reid insisted he plans to run for reelection in 2016, and said he wants to return to work as soon as possible after the surgery, scheduled for Monday. According to the Las Vegas Sun, doctors have told him he could be back to work within a week.

Reid added that the injuries to his ribs were "meaningless," and even took the time to weigh in on the Keystone XL pipeline issue, as well as the NFL's deflated balls scandal.

I can’t believe the National Football League, with the billions of dollars it makes, couldn’t at least determine how much air should be in a football,” he said. “Why it should be left up to the teams.

But as news of Reid's upcoming surgery spread, the overall reaction across social media was... kinda grossed out. Gwen Ifill may have put it best: