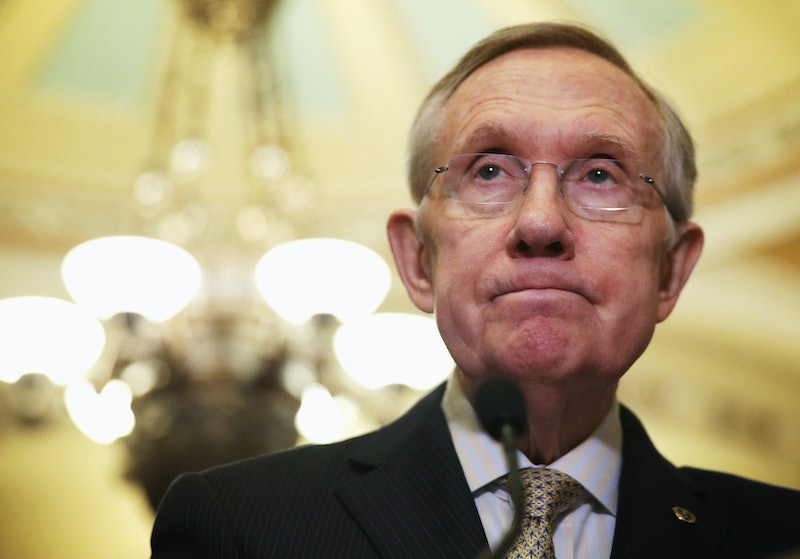 Proving that no good can come of exercise on New Years Day, soon-to-be former Senate Majority Leader Harry Reid was hospitalized after his exercise equipment malfunctioned, causing the 75-year-old politician to "fall and break a number of ribs and bones in his face," according to a statement from his office. The Associated Press reports that Reid sustained injuries after the elastic band he was using snapped, striking him in the face near his right eye. The shock of the impact then caused him to fall, whereupon the Nevada Democrat broke a number of ribs.

Following the incident, the Senator was taken to nearby St. Rose Dominican Hospital, but was then transferred to the larger University Medical Center in Las Vegas for further testing. As a precaution, Reid spent the evening of January 1 at UMC, but luckily, "His doctors expect a full recovery." Despite the broken bones near his eyes and his ribs, spokesman Adam Jentleson was happy to report that physicians found no internal bleeding whatsoever. Ever the trooper, the outgoing Majority Leader will return to Washington this weekend, and will be ready for action when the 114th Congress reconvenes. It is likely that the Republican majority of the incoming Congress will be more painful to endure than Reid's exercising accident.

According to Jentleson, the senator will likely bear battle scars from his altercation with the elastic band in the form of rather severe facial bruises. But this, hopefully, will only add to his intimidation factor as congressional debates resume in the following weeks. The 75-year-old, after all, was a boxer in his younger days, and was known for running marathons. Both of these athletic skills have likely come in handy during his tenure in the nation's capitol.

Republican Mitch McConnell (R-KY) will take over for Reid as the Senate Majority Leader when lawmakers return to Washington, and the 114th Congress will have a number of hot-button issues to discuss at the onset of the new year. With immigration and healthcare serving as key voting topics in the ill-fated midterm elections, there is little doubt that Washington will be all but consumed with contentious legislation as politics gets back underway. Hopefully, this year's Congress will be more useful than the 113th Congress, which made a name for itself by being the least productive session in recent memory, only narrowly avoiding a government shutdown in the wee hours of the morning near the end of last year.

But without the leadership of Democrats like Harry Reid, we may not want to know what the Republican Congress' New Year's resolutions were.

More like this
How To Fight For Reproductive Rights, Based On How Much Time You Have
By Courtney Young
Michigan’s Governor Is “Going To Fight Like Hell” To Protect Abortion Access
By Andrea Zelinski
President Zelensky Spoke Out On Ukraine's Chances Of Hosting Eurovision Next Year
By Sam Ramsden
The Music Industry Continues To Fail Black Women
By Precious Adesina
Get Even More From Bustle — Sign Up For The Newsletter