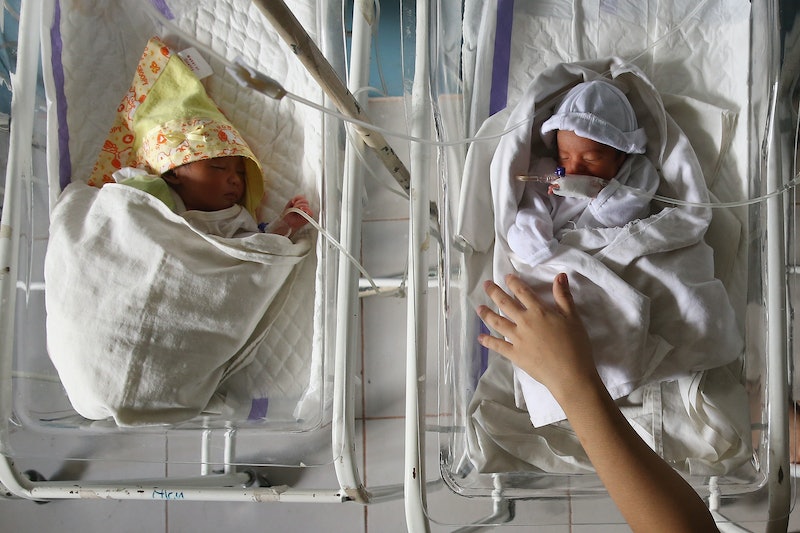 First comes love, then comes marriage, then comes baby in a baby carriage. Eh, wait a second... not necessarily for everybody. Society tends to tell us how we should run our lives, and apparently having a baby is one of them. I mean, haven't you ever seen the look on a person’s face when they hear the words, “I don’t want kids.” It’s like they just saw Janet Jackson’s breast being exposed again during the Superbowl halftime show.

So let me say this on behalf of all the people who don’t want to have a baby in the world, it is more than okay. In fact, if you don’t want to bring a child into this world, you shouldn’t “have to” just because society expects it.

Scrolling through Facebook as you get older becomes very different. Instead of seeing pictures of your friends out on a Friday night with red party cups, you start seeing pictures of your friends with their babies and sippy cups. You’ll start going to more baby showers than you can count on your hand. You’ve somehow become your best friend’s new babysitter. And, you’ve gotten really good at finding children’s gifts on sale. But deep down inside you don’t get that baby fever that others around you have. Instead, you have that, “I don’t want to have kids ever” fever and you’re on fire. Get on with your bad self!

Here are the signs that you don’t want to have kids.

The Thought Of Changing A Diaper Is Terrifying

For starters, you don’t know how to even change a diaper. Plus, the idea of it is the least bit enticing.

You Have Bieber Fever, Not Baby Fever

You are the opposite of Charlotte York, you aren’t dying for a baby. You’re totally more of a Samantha.

Wanting to be selfish is a-okay. Go on and treat-yo-self everyday.

Going to the mall and finding yourself by a bunch of screaming kids is literally your nightmare.

The only joy you get out of babysitting is having free range of their food. I mean, they have two boxes of Cheetos. It’s your lucky day.

You Don’t Envy Other Parents

You don’t scroll through Facebook and see all of your friends having kids and think, “I want to start a family.” You think, “I’m so happy that’s not my life.”

The Thought Of Giving Birth Terrifies You

It all looks like one bloody mess to you. The pain, the screaming, the terror, oh my! You once heard about a woman tearing her vagina while giving birth and that was the straw that broke the camel's back.

You Want To Spend Your Money On You

Diapers are expensive. You can barely afford to buy the nice kind of toilet paper. No thank you.

Boogers, Poop And Throw-up, Oh No!

Just the thought of throw up makes you want to throw up.

You Love Sleep Too Much

You’re not an under-6-hours-of-sleep kind of person. You long for the nights of, well, the nighttime in general. Your sleep game is strong and you won't let anything mess that up.

You Don’t Want To Be Pregnant

The only thing that looks fun to you about being preggers is the whole “eating for two” part.

You Want To Be Free

Just like that Queen song, you want to break free. And a baby will probably not help you do that.

More like this
These 4 Zodiac Signs Have Naturally Inquisitive Souls
By Nina Kahn
November's New Moon Will Breeze Right By These 4 Zodiac Signs
By Brittany Beringer
35 Genius Secret Santa Gifts For Someone You Don’t Know Very Well
By Rebecca Deczynski and Lauren Grant
Emily Ratajkowski & Pete Davidson's Astrological Compatibility, Revealed
By Nina Kahn
Get Even More From Bustle — Sign Up For The Newsletter