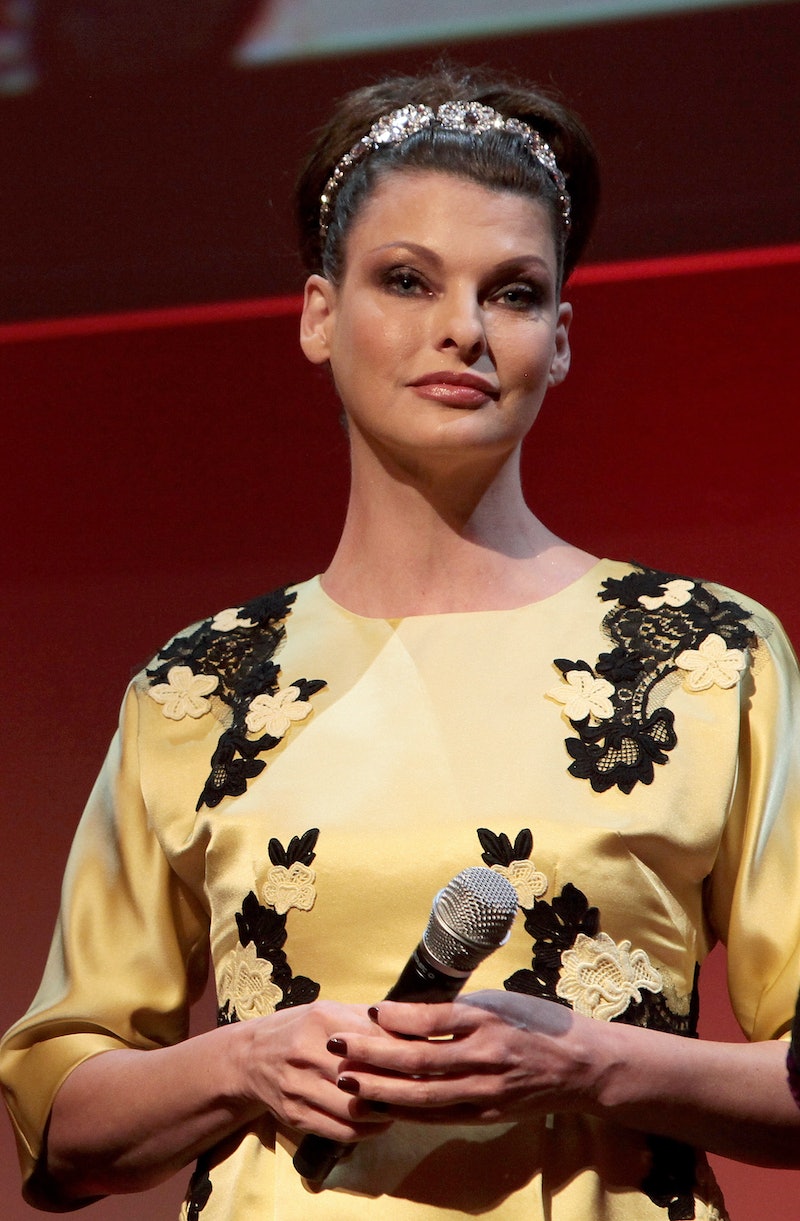 Yes, '90s nostalgia is still raging, including fondness for the era's supermodels. The trend of brands employing over-35 models, many from the aforementioned decade, to be their faces and ambassadors, also continues to rage. Case and point — Linda Evangelista is the new face of Hudson's Bay's The Room! The supermodel, who was once credited with saying she couldn't be bothered to, you know, get out of bed for less than $10,000 a day, is fronting the luxury arm of the Canadian department store.

Hudson's Bay's VP Michael Crotty told WWD that "Linda represents sophisticated fashion. Her beauty has transcended time" and we're not going to argue that point because, well, it's true. Evangelista was, and remains, a fierce beauty. Plus, both Hudson's Bay and Evangelista are Canadian, so there's that.

But the veep made an even more critical point, saying, "We are seeing brands and designers looking for more mature, authentic faces in their campaigns."

And that is pretty thrilling. While many Hollywood actresses have bemoaned the lack of quality, meaty roles to sink their fangs into as they enter their 30s, the beauty and fashion industries are (slowly) becoming the anti-thesis, increasingly refusing to rely solely on pretty young things in favor of embracing and featuring classic and elegant lovelies like Twiggy, the '60s eyelash queen who now reps L'Oreal.

Here's Evangelista, who turns 50 in May, looking dayum fine in her first Hudson's Bay ad.

Charlotte Rampling, who is now 68 and pictured above, fronted NARS, while Marc Jacobs selected Jessica Lange, now 65, as the face of his beauty range.

Naomi Watts is a L'Oreal rep in her 40s, while Halle Berry is still a face of Revlon in her 40s, too!

It's also worth mentioning that Evangelista's fellow '90s face Claudia Schiffer is back on the scene with her new hair care line, since who wouldn't want to ape her thick, full blonde bombshell locks? And Cindy Crawford, who was the valedictorian of the '90s supermodel class? Well, she has never really stepped back or faded from view. Neither has British counterpart Naomi Campbell — even if some of her publicity of late has revolved around throwing cell phones at assistants.

It's truly inspiring that so many high-end brands have chosen not to ignore women of a certain age and have gone even further to actively include them and make them a focal point. That is a beautiful thing. Clearly, over-35 ambassadors and timeless models for ad campaigns is not a trend. It's (finally) reality!