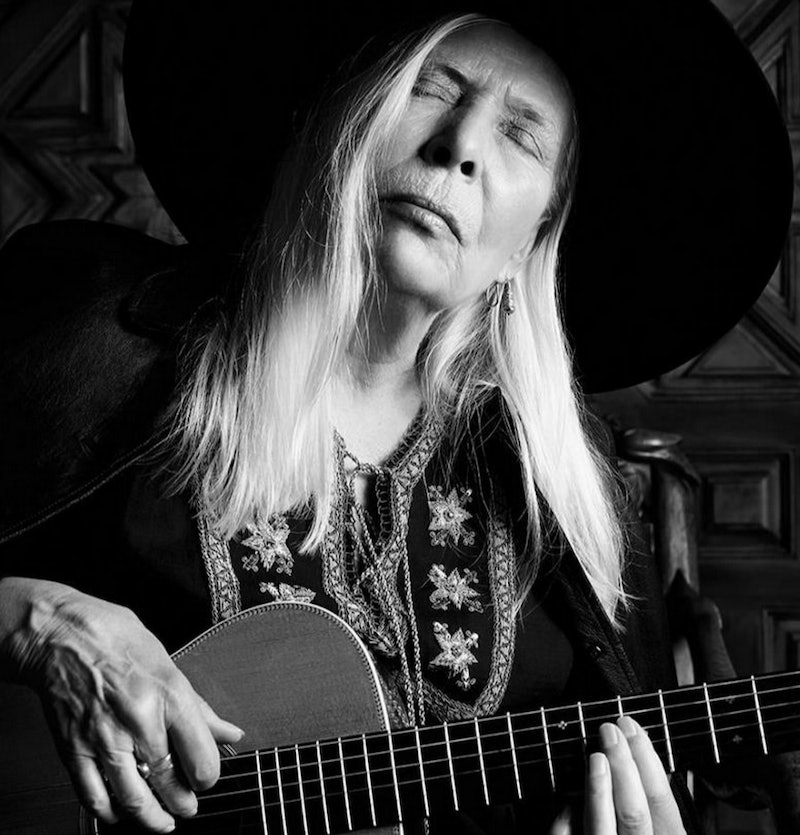 Neither of these women is the run-of-the-mill fashion PR girl icon. One of them is among the most prodigious literary voices of the 20th and 21st centuries, and the other is a folk goddess who narrates her life (and ours) in extended, torturously beautiful conceits. On the other hand, they capture the essence of fashion: Didion, the lyrical high priestess of too-cool-to-care, and Mitchell, the bard of the hippie free spirit. Subsequently, both of these women elicited the same frenzy of re-gramming and general gushing reaction from the girls and boys who recognize and love them. It was an unsurprising public reception for two ladies who were surprising yet perfect fashion campaign stars.

Part of the hyper-positive commentary on the events was one of feminist and anti-ageist triumph. In persona and personality, Michell and Didion represent the antithesis of fashion’s favorite faces like Kendall Jenner and Gigi Hadid, the nubile daughters of reality television turned supermodels. Joan, 80, and Joni, 71, are independent spirits, badass ladies who create art that ferries young women through periods of self-discovery, offering an alternative to being objects of sexual desire. Furthermore, casting two women in their 70s and 80s seems unconventional and refreshingly progressive for a business that subsists on the commodity of youth.

But admittedly, my first reaction was “REALLY?! Joan and Joni are becoming absorbed by the fashion behemoth?!” In a thoughtful essay in The Daily Beast, Tim Teeman discusses how casting Mitchell and Didion in these campaigns corrupts their sacred personalities. “They used to do their own thing…” Teeman says, “Now they have been co-opted by the industry, and their images used on advertisements that propose we spend our money on overpriced clothes and perfumes and handbags.” But in my mind, the teaming-up of these forces says more about the fashion industry rather than these ladies selling out. Hardly a surprise, this is a formula that fashion marketing has been using for a while: Get a super-cool, recognizable celebrity (preferably, one who is white and thin); clothe them in a $4800 tunic; direct them to arrange their faces in an expression of trendy indifference; rake in the dough.

But lately, much to the surprise of many people, it seems that plenty of these super-cool recognizable faces have been over 60. 93-year-old design darling Iris Apfel has two campaigns under her belt this year. Not only was she the face of & Other Stories for their New York launch in 2014, but she’ll also star in the new Alexis Bittar campaign (alongside Tavi Gevinson). At 64, Jessica Lange was the muse of Marc Jacobs beauty in 2014, and both Helen Mirren, 69, and Diane Keaton, 68, appeared in ads for L’Oreal (which they were accused of heavily photoshopping). Some say that these campaigns evidence that culture is evolving towards a pro-lady, “beautiful at any age” point of view. Others say that this is luxury’s attempt to reach out to an older crowd.

In my mind, there’s something else at work here. All of these “older” women cast to appear in said fashion campaigns have a few things in common. Beyond being white, thin, rich, and famous, they’re seasoned cool girls — subjects of rampant crushing from the Millennial set. They’re poster-women for the poetic souls and feminists. English and gender studies double majors who pore over post-modern literature in their dorm rooms with “Case of You” playing in the background herald these ladies as their ideal future selves. Consequently, the target demographic is comprised partly of girls who are, likely, critical of the luxury rag trade, with its sizeist hegemony, white privilege, classism, and general problematic nature. I know this, because I'm part of this demographic. If anything, luxury labels are using these “golden girl crushes” to honey-pot the younger ladies into buying Saint Laurent leather jackets that cost the equivalent of six months' rent.

Consider the reactions of the social media-using crowd to last week’s Joan fashion takeover. Plenty of the people re-posting and gushing over the choices belong to this certain niche market of cultural junkie twentysomething fan girls. If Slouching Towards Bethlehem changed Phoebe Philo’s life (just like you), and Hedi Slimane knows every lyric on Blue (just like you) there’s a sense that these brands get us. They understand us so well that they get exactly what we want our lives to look like in 50 years, and will use those fantasies to win us over.

Everyone from Lange to Mirren is awesome and offbeat. Being grand dames, they’re self-assured, accomplished, and portray an understanding of the world that the young girls can look forward to after we navigate through the uncertainty of our early twenties and thirties. Each of the women in these ads is beautiful and impressive. They radiate a sense of power and style that come from surviving life’s trials. They've grown out of sweating the small stuff to emerge into the existential clearing as fully-formed HBIC's. This is an essence shared by our mothers, grandmothers, great aunts, and female mentors. It’s a kind of beauty that lasts far beyond the physical prime of youth. It's a type of beauty often ignored by a culture that pressures women to remain forever young. Thus, when we see a break in this pattern, it's hard not to be excited and identify it as a sign of cultural progress.

Still, we need to be critical of the intent of these ads from a fashion business perspective. First of all, there are clear conditions to having style at any age. Namely, beauty is only ageless if you can spend unorthodox amounts of money on a pair of Celine glasses, paint your face in wrinkle-free foundation, and are thin and white. To that end, these ads seem to be masquerading as feminist endorsements, when they’re really just regular old fashion ads. Albeit, fashion ads with FAR cooler people in them, but ads that capitalize on celebrity just the same.

Like the Chanel pret-a-porter feminist picket line, these displays aren’t entirely sincere in their supposed “progressive” politics. They’re targeted at young people. They eschew real diversity, and maintain traditional standards of the body beautiful. They perpetuate the aspirational power of wealth, and they conflate consumerism with self-actualization. This “golden girl crush” marketing trend seems to be another move in which feminism runs the risk of being domesticated by the forces it fundamentally opposes — capitalism, the patriarchy, white privilege. Thus, it's important to reserve the kind of uncritical praise that the fashion industry expects when they make strategic decisions like this. Sure, we can be cautiously excited about the superficial little breakthroughs of seeing sorta different kinds of bodies in fashion ads. Hopefully, they will lead to big ones. However, it's important to hold out for more and to recognize a big yellow taxi when it rolls on by.

More like this
I Tried Kendall Jenner's No-Pants Look As A Plus-Size Woman
By Sarah Chiwaya
Instagram & Facebook May Finally Lift Their Notorious Nudity Ban
By Allie Fasanella
24 History-Making Black Women You Probably Didn't Learn About In School
By Ayana Lage and JR Thorpe
25 Inspiring Quotes From Black Women To Celebrate Black History Month
By Kyli Rodriguez-Cayro and JR Thorpe
Get Even More From Bustle — Sign Up For The Newsletter
From hair trends to relationship advice, our daily newsletter has everything you need to sound like a person who’s on TikTok, even if you aren’t.