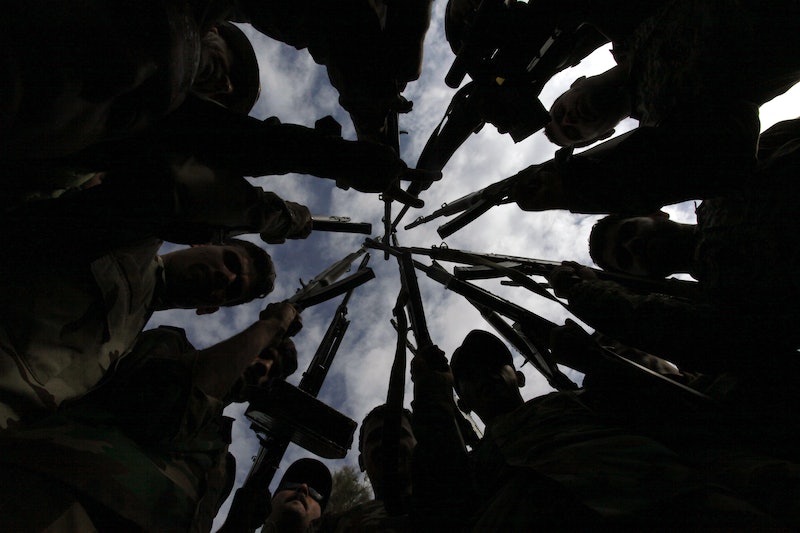 Earlier this week, ISIS posted a video showing its first Japanese hostages, whom they threatened to kill unless the Japanese government handed over $200 million in 72 hours. In the video, the terror group addressed the Japanese public, handing them the task of pressuring their government to comply. Not only did the Japanese people defy this threat, they went to extremes — by mocking ISIS with memes on social media using a hashtag that translates to "ISIS Crappy Photoshop Grand Prix." Though these images, which are meant to symbolically resist terrorism, are well-intentioned, they trivialize a very serious situation.

Using the "ISIS Crappy Photoshop Grand Prix" hashtag, Japanese Twitter users and blogs have posted countless images of Jihadi John Photoshopped in comical ways. Many of these images reference Japan's gaming culture. Examples include superimposing the ISIS militant over anime cartoon scenes, comparing him to Austin Powers villain Dr. Evil, and one image even features North Korean dictator Kim Jong-un pointing and laughing at ISIS. But in other examples, the hostages themselves are caricatured.

Twitter users have been asserting their message along with the memes, pointing out that it was Japan's way of resisting ISIS. One user posted, referring to Friday's deadline for the ransom money: "Tomorrow will be sad but it will pass and #ISIS will still be a big joke. You can't break our spirit."

Others were not so quick to laugh, noting that the situation is grave and that these memes were not only trivializing the terror group, but the hostages as well. Another user wrote: "Japanese citizens at risk of being executed and all their people do is make Photoshop images? really?"

According to social media metrics site Topsy, the hashtag has been tweeted more than 70,000 times since Tuesday, when ISIS posted their video.

Some more examples of Japan's defiance by mockery...

Some people have pointed out that by using Twitter, ISIS's social media platform of choice, and by making fun of the group's video, the Japanese people are taking back control and deflating ISIS's formidable image.

We are doing everything possible to ensure the release of the hostages. Japan will not cave in to terrorism.