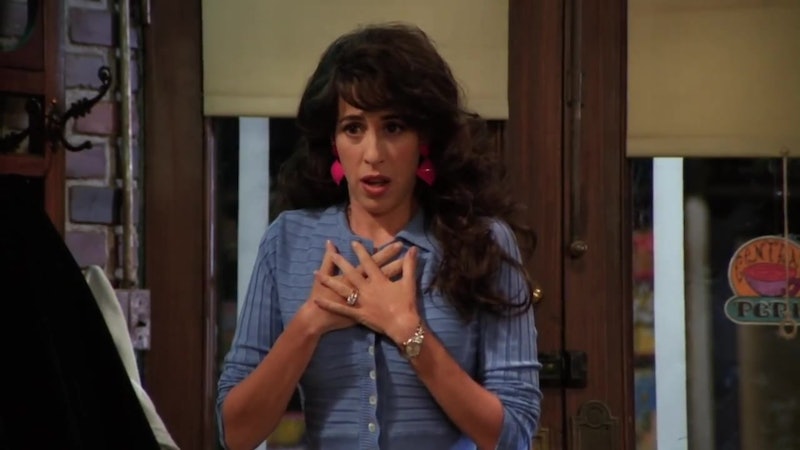 If you've been spending your nights and days binge-watching Friends now that it's thankfully on Netflix (my roommates and I certainly have), I have a question for you: Are you baffled by how long it takes Monica and Chandler to get together? I, somehow, completely blocked out all of their other relationships, including Chandler's longtime girlfriend Janice Litman on Friends during seasons 1, 3, and on/off throughout the series. Thinking back, I don't know how — her voice is pretty unforgettable, not to mention her signature "Oh. My. God." It's a very unforgettable voice, and for all the wrong, obnoxious reasons.

Of course, if you're one of the many who does remember Janice better than I do, you likely know this voice well: And, with all the added attention the series has received lately thanks to Netflix, it's worth investigating a little more. After all, as I said, it's a very unforgettable voice. But, is it real?

As it turns out, fellow Friends devotees, Janice and her obnoxious voice was really all an act: The actress who portrayed Janice in the show, Maggie Wheeler, is actually a working comedienne and voice actress who is known for far more than just a New York patois... even if you may not recognize her without it. In fact, she's appeared in tons of movies, other sitcoms, commercials and even done voice work — in a non-Janice voice, that is — for animated character including "Trinette" on the popular FX series Archer.

Don't believe me? Let's compare. Here's a taste of that infamous voice with one of Janice's most popular "catchphrases." I think the accent gets even more exaggerated as the series goes on, wouldn't you agree?

Familiarized? Prepare to have your mind blown.

This is an interview that Wheeler did for Oprah's "Where Are They Now" last year. Listen as she transforms her voice in and out of "Janice mode." Here are some more clips of the actress over the years.

Now that you've heard Wheeler's natural voice, here she is putting on a slightly dorky accent as a camp counselor in The Parent Trap. You thought Lindsay Lohan was the only one in that movie doing a fake voice? You were wrong!

This clip from Seinfeld is almost even more confusing, because that 90's hairdo makes her look like Janice... but she sounds completely different.

Prepare for some soul, here's Maggie Wheeler singing "Ain't Got No" from the musical Hair.

Finally, here is one final blast from the past. Maggie Wheeler's voice was featured in the '80s cartoon Silverhawks. Versatile as ever, she played "Melodia," as well as "Steelheart" on the show. How cool is this lady? As fun as Janice is on Friends, Wheeler is clearly so much more than a laugh and a catchphrase — and thankfully so.