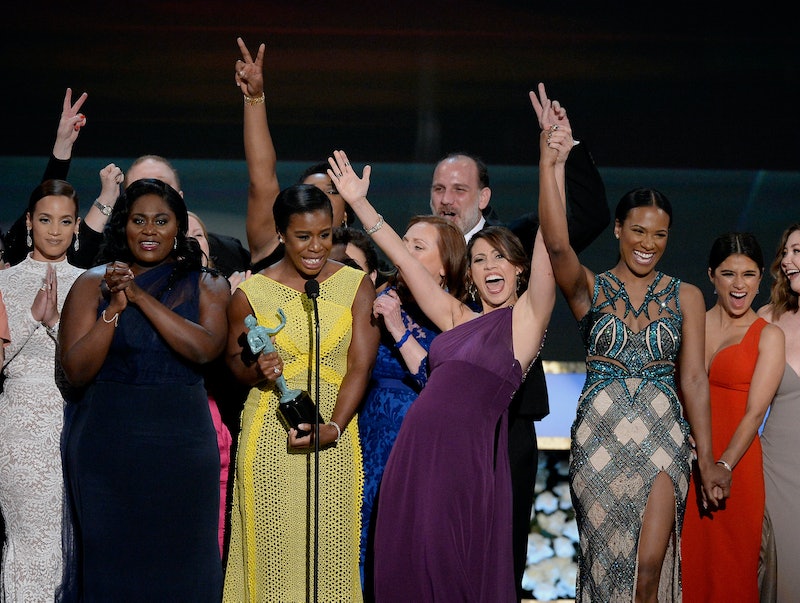 Well, that was a huge shocker! At this year's Screen Actors Guild Awards, Orange Is the New Black took home the award for best Ensemble in a Comedy Series. The show was nominated alongside The Big Bang Theory, Brooklyn Nine-Nine, Modern Family, and Veep. I guess the cast's fellow actors are big fans of staying in with some Netflix just like the rest of the world!

The news of Orange Is the New Black's win is so surprising because Modern Family has won the award for the past five years! Anyone who watches the SAGs every year surely expected to see the Dunphy-Pritchett family take the stage yet again, but instead a group of hilarious inmates made their way up to accept The Actor (ya know, the little green statuette) instead.

Accepting the award for Orange Is the New Black was Uzo Aduba who moments before won Best Actress in a Comedy Series for her role as Crazy Eyes on the show. The actress was joined on stage by her fellow cast members and thanked the Screen Actors Guild (aka all those lovely faces in the audience) and made sure to thank series creator, Jenji Kohan. In addition, she thanked the fans of the show who are passionate about the series and were surely glad to see their favorite thing to stream online take home the award.