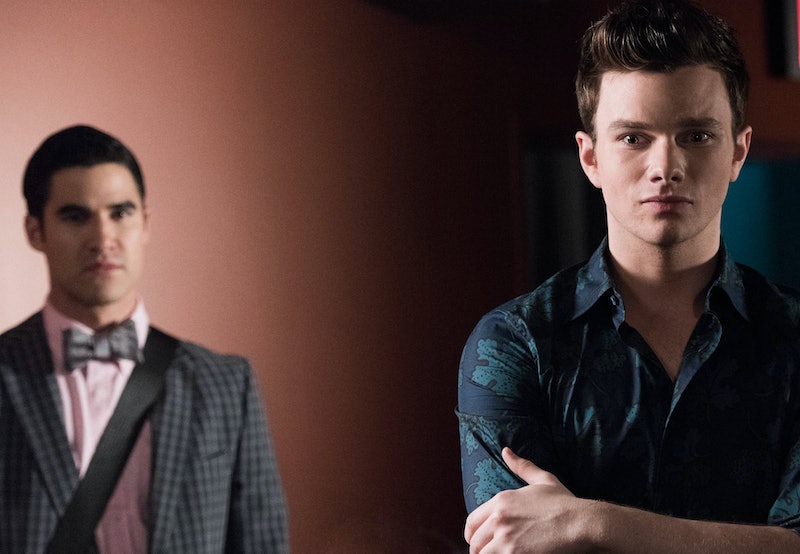 From the moment that Glee revealed in its Season 6 and final premiere that Blaine was dating Dave Karofsky after he and Kurt broke off their engagement and broke up, I've felt... really uncomfortable with the storyline. If Blaine is dating Dave as a rebound, that's completely unfair to the guy. And it must also be a terrible feeling for Kurt since Dave was originally his biggest bully and then expressed love for Kurt before he had the courage to fully come out. Plus, Blaine and Kurt should have had time apart alone before deciding to get romantic with anyone. Oh, and they should probably get back together for the sake of most of the Glee fandom. Apparently Sue now speaks for that very same portion of the fandom as she revealed in "The Hurt Lock Part 1" that she was very much on Team Klaine, and would do anything to get the former couple back together again.

After Will apparently offended Sue "for the last time" by leaving an unused fork on her table, Sue decided she would finally get her revenge against him and her other nemesis, Rachel Berry. She led Becky to a secret storage space that contained all of the hate paraphernalia she created for her least favorite glee clubbers. However, when the camera panned past all of the crazy nonsense Sue had been storing to fuel her anger, a shrine for Klaine was shown on the wall. Here Sue explained via voiceover that she wanted Blaine and Kurt to reunite so that she could reveal her secret desire to be "a flower girl in their fabulous gay wedding."

And considering how crazy obsessed Sue can get when trying to achieve her goals, she did her homework about the couple and their obstacles, including Dave Karofsky. Sue's first attempt to break up the couple was probably the dumbest move, and the most hilarious. When Sue discovered that Dave had dated only "bears" in the past, she put a real live bear cub in his room which only scared him and probably brought he and Blaine closer together.

She also spoke to Kurt about her desire, to which Kurt replied that the ship had passed and that he himself was also moving on with a new guy he met online named Walter (a man who turned out to be 50 plus and used an old photo for his dating profile... awkward). But obviously Sue would never let a few setbacks get her crazy optimism down.

She then invited all of Dave's "bear" ex-boyfriends — and there are plenty in the Lima area — to come to Breadsticks to crash Dave and Blaine's date night. She also approached the couple and told them that thanks to her research on an ancestry website, violation of privacy and obsession, she discovered that Blaine and Dave were actually third cousins.

All of these sabotages clearly disturbed Blaine to his core and he seemed to be doubting his relationship with Dave, but Kurt tried to comfort him before telling Blaine that he was also moving on in his love life. And to be honest, even more so than Sue's nonsense, this news may have hit Blaine the hardest. Blaine probably always expected that Kurt would be in love with him and wait for him. But when Kurt explained he was ready to move on, maybe Blaine realized that dating Dave was just a rebound and/or subconsciously designed to move past or affect Kurt.

"The Hurt Locker Part 2" that premieres next Friday night shows Sue stepping up her game to finally get Kurt and Blaine back together by trapping them in the same place together, and once again truly voices this passionate fandom. And while her methods are madness, if trapping Kurt and Blaine in an elevator together for hours will actually help the former couple work out their issues and their feelings for each other, I am completely on board.