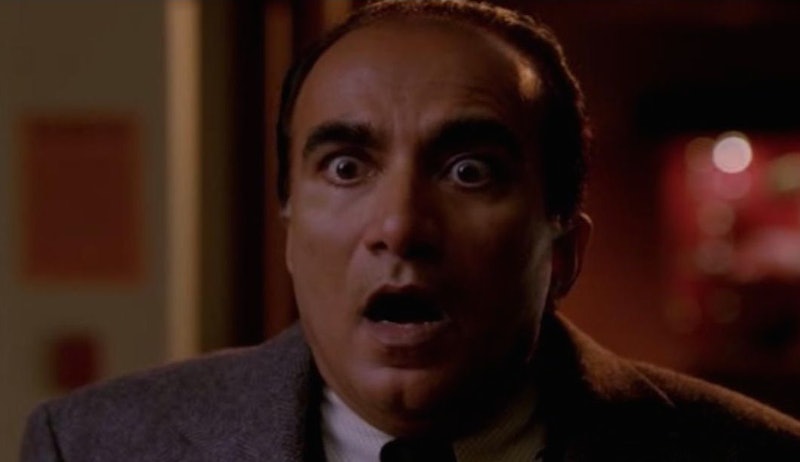 From high school principal to coffee shop barista and janitor, Principal Figgins has always been the enigma of McKinley High School. His story lines have always just consisted of Sue taking away his power and his job as principal or of Will convincing him to give the glee club another chance. We've rarely seen anything regarding his life outside of McKinley But in Glee 's sixth and final season, we finally got a big, weird glimpse into his personal life. In "The Hurt Locker, Part 1," Sue discovered that the Carmel High School's principal was Abigail Figgins Gunderson, the sister of the one and only Principal Figgins. And who played Abigail? The one and only actor who played Principal Figgins.

That's right, Iqbal Theba donned a blond wig, pink blazer and accessories to play his sister who, like her older brother, was also part of a high school administration. We also learned that the Principal Figgins that we love's first name is just that. Principal. Seriously. And why would he get that name? Because he's the firstborn, duh! Seriously who is Principal Figgins? Why haven't we learned more about him in these long six years? If these are the tidbits we're missing out on when it comes to Figgins, we should have an entire episode or two dedicated to him!

Since we really don't know much about know much about the Figgins family, especially firstborn Principal (that is so weird to say), why don't we create a few interesting story lines about his personal life? Let's recount what we do already know in order to establish the realest back story we can create. In Season 1, we discovered that Principal Figgins toyed with acting in his early years, including doing a cock commercial for Mumbai Airlines. He believes in vampires which we know thanks to his belief that Tina was a vampire. It's pretty awesome.

Higgins is also often known to worry about not wanting to offend people. It's never stated if that's just because of his former status as principal or if there are more psychological reasons behind these feelings. He also does try his hardest to support the glee club in any way possible and has been seen arguing for them when he can.

So what can we glean from these bits and pieces? Figgins was probably married once before, but that marriage fizzled out thanks to his constant stress regarding his job and because he's just a weird person. His family are devoutly religious, though their specific religion is unknown. However, as Figgins gets closer with his students and with the glee club, he learns to not be so strictly within the frame of his upbringing and religion.

Figgins probably also has a small, but important crush on Sue Sylvester. He can't just be afraid of her, he must also have a thing for her at least a little because he seems like the kind of person who would be attracted to strong women since he tried to hit on Rachel's birth mother Shelby. Also, I like to believe that Figgins also once had a dream of becoming a dancer but his family traditions and obligations made him rethink his dream to become a high school administrator.

That's enough guestimations from me. Glee writers, let's get a little more info about Figgy before the series ends. You did a great job of finally giving the band, the lost members of New Directions and the piano player at McKinley a shout out in "The Hurt Locker, Part 1." Now we need more. Don't leave us hanging forever!