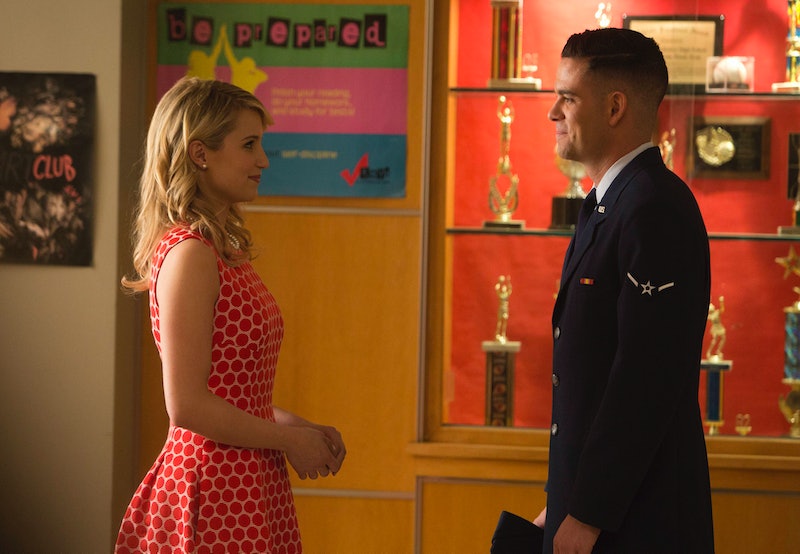 It's not that I'm not excited for more of McKinley High's original New Directions to return for the series' last hurrah, I just feel like it's sort of odd. Which is honestly how I've felt about all of the Glee Season 6 spoilers so far — including Wednesday's announcement that Dianna Agron and Mark Salling will return for Glee Season 6. I can't quite figure out what Ryan Murphy is trying to pull here (which says a lot, considering I've been a consistent Glee fan since 2009) and it's messing with my head.

So far FOX and Murphy have dropped several spoiler-bombs on fans since Glee Season 5's premiere and they've just been weird. And prompted me to ask myself why I'm putting myself through the torture of building up Glee's final season and hoping it'll return to its Season 1 glory. Why did they hire SIX new characters? I mean, I'm still wondering what happened to Season 4's new characters, particularly Becca Tobin's Kitty. And how the hell are they going to give anyone, including Agron and Salling, a sufficient goodbye in just 13 episodes when it seems like they've got a bigger cast than ever? I JUST DON'T KNOW and I can't even begin to try to figure it out. Some things are just beyond fans' control and comprehension and one of those things is Ryan Murphy's imagination.

With that being said, here are all the weird announcements about Glee Season 6 up to this point:

Back in July, TVLine revealed that Glee had cast six new high school students for its upcoming final season. Which makes sense with Season 6's message — the importance of the arts in high schools — but still, what?

Why It's Weird: Does no one remember how badly this went the first time around? Sure, there were a few gems in the New Directions: Next Generation, but Glee fans never really got attached to the new crew of kids. Probably because we were still waiting for Finn (RIP) and Rachel to get back together. Also, how the hell do they plan on setting these new characters up sufficiently when they couldn't pull that off after two seasons with Kitty, Marley, Jake, and the rest of that crew? Weird, just weird.

The Return Of The Original New Directions

We already knew that Season 5's main cast — Rachel, Kurt, Blaine, Artie, Sam, Mercedes, and Santana — would return for Season 6. But on Wednesday, along with the announcement that Agron and Salling would return, it was also revealed that Jenna Ushkowitz would reprise her role as Tina "The Worst" Cohen-Chang in the upcoming final season.

Why It's Weird: I'm cool with this crew going back to their roots and coming back for one, last goodbye to the series. Again, in the interest of time, 13 episodes doesn't seem like it'll cut it with this gigantic cast. Maybe my expectations are too high, but didn't Puck and Quinn sort of ride off into the sunset and get a happily ever after last season?

Along with the announcement that Max Adler would reprise his role as Dave Karofsky in Season 6, there also came a theory that Karofsky and Blaine would have a romance. OK...

Why It's Weird: Kurt and Blaine ended Season 6 on a high note and not even Shirley MacLaine could break them up. So, WTF, Ryan Murphy? Also, Karofsky has so much more to offer than to just become Blaine's boyfriend. His return isn't weird so much as the fact that he might break up the only couple we're still rooting for. (Even though they're the worst always.)

Apparently Rachel's going to fail at life and return to the choir room that started it all in Season 6. Fittingly full circle even if it is pretty damn sad.

Why It's Weird: Is anyone else having déjà vu? Is this supposed to be a final tribute to Cory Monteith and Finn Hudson that Rachel will return to McKinley and finish the job that should've been his? Also, why isn't Rachel going back to school and finishing her degree — she's, like, 22 and her whole life is ahead of her.

Glee Season 6 will only be 13 episodes long and will premiere mid-season. Yes, you heard me. And it was apparently a decision made in the interest of not putting too much pressure on Murphy to perform so much as to give Glee a goodbye fit for the breakout star that it once was.

Why It's Weird: Wouldn't it be more of a show of solidarity to give Murphy as many episodes as he wants? And if that was the case, why didn't Murphy want to give Glee a standard 23-episode final run? Weird. Just plain weird.

Why It's Weird: Santana was by far the best part of Season 5, so why wouldn't they keep her around to give her the proper, sassy, Lima-Heights goodbye she deserves? Maybe those Lea Michele feud rumors actually were true.

All Of These New Jobs

E!Online revealed that Sam, Blaine, and Mr. Schuester are all getting "surprising new gigs" in Season 6. So, is Sam going to become a physics teacher or something?

Why It's Weird: Again, DO WE HAVE THE TIME FOR THIS? I know there will be a time-jump because there's always a Glee time-jump, but c'mon. We're expected to say goodbye, sing "Let It Go," AND get all of these explanations about this crew's new gigs. Did they restart Mr. Schue's boy band and reach international stardom? That'd be pretty cool.