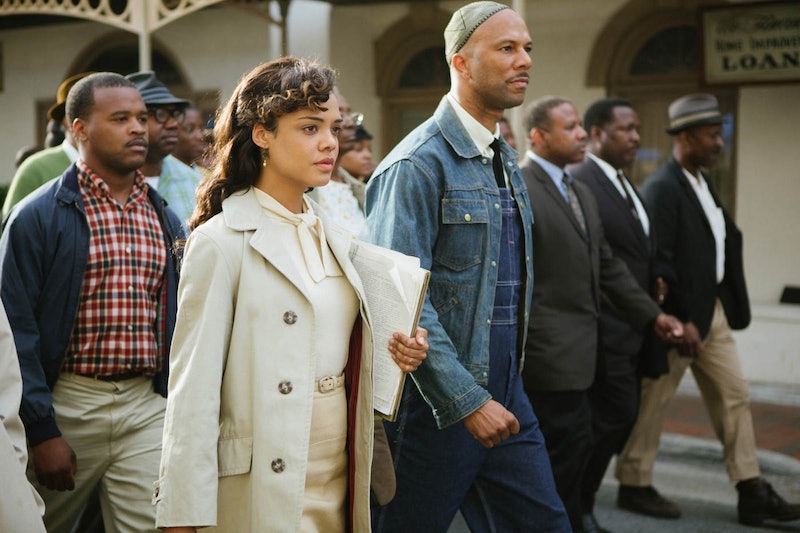 It happens to the best of us: Despite all of our efforts to remain culturally relevant, up-to-date on all the major going-ons in popular culture, and trendy enough to segue from a conversation about The Bachelor's new season to a conversation about the existentialism in Boyhood , sometimes, timing gets the best of us, and we realize we may have missed a few big cultural icons — like, say, movies that are nominated for Best Picture at this year's Academy Awards — in the whirlwind of the holidays and the new year. There's no shame in it! You're a busy person! Of course, however, now you're caught in a bit of a dilemma: The Academy Awards are coming up next month, you still haven't seen all of the movies...and now most of them aren't playing in theaters anymore. What's a devoted film buff to do?! Well, consider me your savior today, guys: Because with this post, I bring the news that you now have one more chance to screen every single Oscar Best Picture nominee before the Academy Awards take place in February, and it's all thanks to AMC movie theaters. Miracles do happen.

According to the AMC theater chain itself, the program is called "Best Picture Showcase," and, trust me when I say this, it's not for the light-hearted (or small bladder-having) film lover: Basically, AMC is going to marathon all 8 best picture nominees over the course of either two consecutive Saturdays or over the course of 24 hours on one Saturday, depending on which option you choose:

The first option takes place on two Saturdays: one being Feb. 14, and the other being Feb. 21 — the day before the Oscars. Patrons have two ticket options: They can either buy a ticket to one of the Saturdays for $35, depending on which films they'd like to see most, or they can save $5 and buy tickets to attend both days.

The second option, however, is definitely the more hardcore of them all: If you'd rather just pack all your movie viewing into one day right before the Oscars, you can pick the marathon pass, which includes AMC screening all the Oscar-nominated films over the course of 24 hours on Feb. 21 — in other words, the first movie begins screening at 10 AM, and the last film begins screening at 3:45 AM.

While, personally, the thought of spending an entire day — or two, if you're slightly less spontaneous — in a movie theater makes me want to run far, far away, I have to admit, it does sound fun if you're the adventurous type. For reference, if a patron chooses the two-day option, on the first Saturday, Feb. 14 (great Valentine's day date plan?), AMC will be screening The Grand Budapest Hotel, Whiplash, Birdman, and Selma, and on Feb. 21, they'll be screening Boyhood, The Theory of Everything, The Imitation Game, and American Sniper. For the 24-hour option, well...it's all those movies in literally one day.

So far, about six theater locations participating in this event have been announced (they're listed on AMC's website), but fret not if you don't see your favorite theater listed yet: In addition to offering the event, AMC also partnered with the crowdsourcing platform Tilt to help those not living near a participating theater help bring the event to their own city. Basically, through AMC's website, users can nominate and reserve tickets for the event at an AMC theater of their choice. Once 100 tickets total are reserved at that theater, the event is made official, and the theater will add it to their showcase and make the necessary preparations for hosting an all-night movie marathon.

Hey, while this may be a major undertaking for any film fan, you're still dying to see one (or a few) of the Oscar-nominated films before the big day, it is your last chance — and in that sense, this kind of isn't a bad deal. At least there'll be popcorn!

More like this
14 Women To Watch This Oscar Season
By Marina Watts
How To Stream 'Bros'
By Morgan Leigh Davies
Gabby Petito’s Family Responded To The New Lifetime Movie About Her Final Days
By Grace Wehniainen
13 Photos Of The 'Blonde' Cast Vs. Marilyn Monroe & Other IRL Counterparts
By Marina Watts
Get Even More From Bustle — Sign Up For The Newsletter