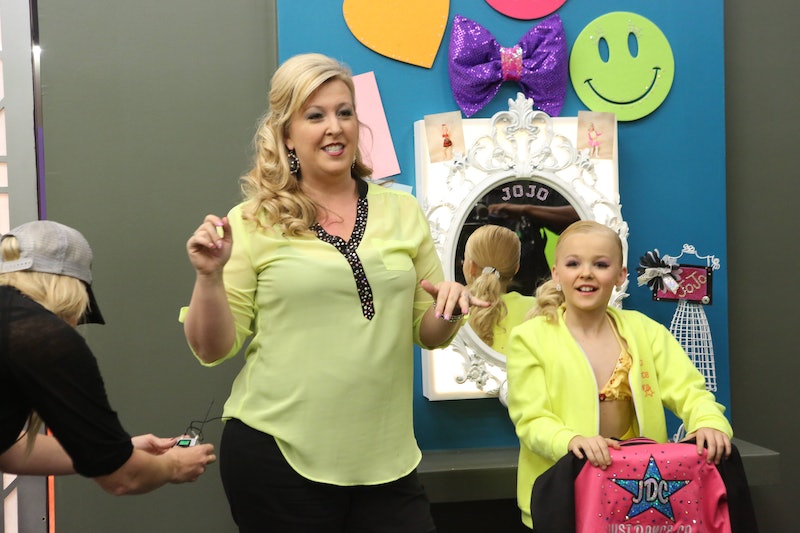 As many fans suspected, guest Mom Jessalynn Siwa ruffled some feathers on Dance Moms' Jan. 20 episode, "JoJo with a Bow Bow." Her dancer daughter JoJo Siwa was brought on by Abby Lee Miller to fill in for Maddie Ziegler while she was in Los Angeles, so who is this new mom? Jessalynn made an impression on the Dance Moms, but it was far from a good one. (And it didn't seem that the dancers were getting along with JoJo either, which is a shame.) Of course, anyone who had seen her on Abby's Ultimate Dance Competition knew that was going to happen, but even I was taken aback at how outspoken Jessalynn was.

Jessalynn is not only a guest on Dance Moms, she is also a dance school owner herself. She has a studio named Just Dance Co. in Omaha, Neb., and on the website she wrote, "I have been involved in the dance business for the past 18 years, as a studio owner, instructor, choreographer, competition judge, and most recently a mom." (And she loves to make hair bows.)

Of course, the introduction of any new dancer and her Mom would cause some issues at the Abby Lee Dance Company. But JoJo's mom Jessalynn proved to have a special way of pissing off the Moms.

With lines like, "I just think you guys are lucky to have Abby in your kids' corner" when they were upset with Abby and, "Abby must really care about JoJo if she's changing her solo and trying to make it her best," it was no surprise that the Moms didn't take kindly to Jessalynn's arrival. Holly was having none of it and said about Jessalynn, "I don't know who this woman is and quite frankly, she's not someone I even really want to get to know." Man, when I agree with Holly, I really agree with Holly.

Jessalynn was particularly cruel to dancer Sarah and her mom Christy. Sarah was brought in to do the dance that JoJo was supposed to do — but that Abby didn't feel JoJo had the technique for. Besides Jessalynn saying Christy belonged more in a thrift store than in the dance studio, things turned real ugly during the competition. All of the Moms turned completely against Jessalynn (she's like the new super villain of the show) when she told Sarah (who took first place in her younger age group) that JoJo actually had two points more than her on her score sheet. Everyone (but JoJo and Jessalynn) thought it was inappropriate to bring that up with the children around.

Abby even told Jessalynn that she's creating a monster when it comes to JoJo — but that doesn't mean we've seen the last of JoJo — or Jessalynn. Both will return to Dance Moms in the fourth episode of Season 5, "Bye Bye Pittsburgh," which Lifetime has described as, "LA is only one week away and JoJo and Jess return to fight for a spot on the ALDC and are determined not to lose again."

So, if you're a Jessalynn and JoJo fan, tune into Dance Moms on Tuesday nights. If that doesn't satisfy you, Jessalynn is active on social media, with a Facebook page, Twitter account, and YouTube channel dedicated to the world of her daughter's dance.