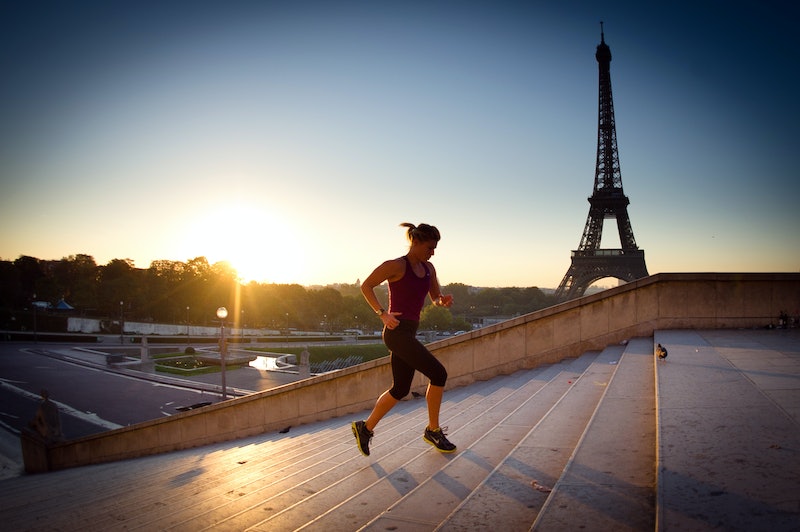 You've probably heard a lot of conflicting information about when you should exercise if you want to lose weight: before breakfast because your body burns more calories, after a small snack so you have enough fuel, etc. But it looks like you should start setting your alarm early after all, because scientists say that working out on an empty stomach burns more fat and keeps you from packing on the pounds. This makes me incredibly sad to hear because waking up at 8:45 a.m. is early enough as it is and I don't think I could drag my butt out of bed any earlier, especially not to the gym. What's that thing they say about no pain?

The findings come from a 2010 study conducted in Belgium, where they took young, healthy men and gave them a six-week diet with 30 percent more calories than they were used to, and 50 percent more fat. The control group remained sedentary, while one experimental group exercised mid-morning, and the other exercised before eating anything.

Not surprisingly, the sedentary group gained weight (an average of six pounds in six weeks. Yikes). The group who had exercised after eating still gained weight, an average of three pounds per person. Both groups also developed insulin problems, which I didn't think was possible in such a short time frame, so next time I'm on an extended vacation I'm really going to think about if I need all those sugary drinks (sigh).

Here's what's interesting: the men who'd exercised before breakfast practically gained no weight, and their bodies burned more fat throughout the course of the day than the other groups. How fat burning throughout the day was measured, I don't know.

While none of the people in the study actually lost weight, the results are still relevant to weight loss because it shows that fasted training (working out before eating), "is more potent than fed training to facilitate adaptations in muscle and to improve whole-body glucose tolerance and insulin sensitivity."

Basically, exercise is more effective and you get more benefits out of it if you do it before you eat. This study shows how the timing of exercise can help you keep the pounds from creeping up if you're eating a less-than-healthy diet, so I don't think it's too far of a leap to conclude that if you combined the fasted exercise with a healthy diet, you'd probably see the numbers on the scale move down.

Since I'm like Regina George, I think I might give this a try. Not because I'm mean or because my hair is insured for $10,000, but, y'know:

I think, given all this info, I could manage waking up an hour earlier (but no more than that) since, after all, drinking coffee before a workout is good for you.