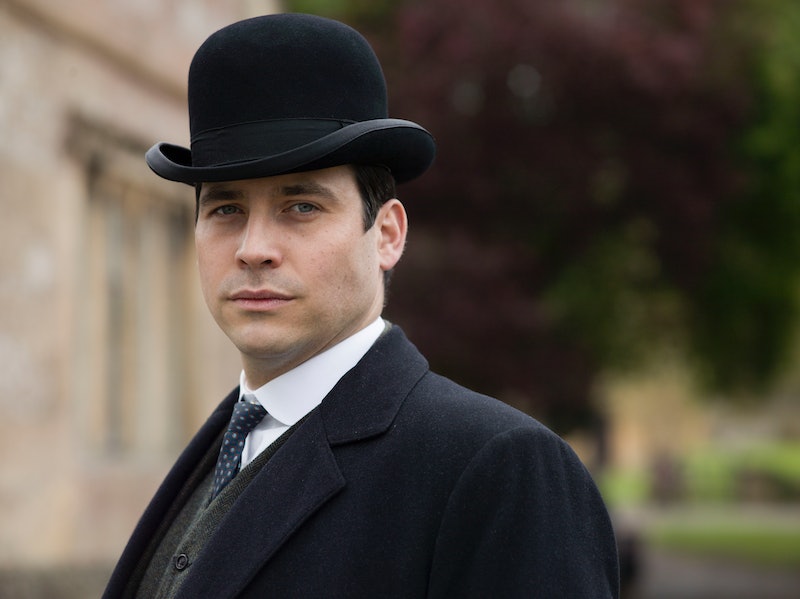 In the fourth episode of Season 5 of Downton Abbey, we saw Thomas return from his mysterious errand and then potentially using some sort of drug (which involved a needle and a spoon). Considering how distraught Thomas appeared, one had to assume that Thomas Barrow is using "Choose Your Own Path" to cure himself of something — and unfortunately, that something is his homosexuality. Now, I want zero reason to be empathetic toward Thomas Barrow. But trying to "cure" his homosexuality? Ugh, my heartstrings. Yes, Thomas is a terrible person who feels the need to cause drama all. of. the. time. at Downton. But the idea that he is trying to rid himself of a part of his being is completely depressing — and frighteningly real for the time period.

Writer and creator of Downton Abbey, Julian Fellowes, confirmed that Thomas is trying to change his sexuality. "He falls for the quackery that this can be cured, that he can get rid of this dumbbell he is dragging around with him," Fellowes said in a video on ITV. "His fortitude takes him through a period of incredible physical discomfort."

Downton is not always 100 percent historically accurate, but I wanted to find out if there were actually other programs in the 1920s like Choose Your Own Path. Homosexuality did not become legal in the U.K. until 1967, but that doesn't mean gay culture was absent from England before then — particularly in the time period Thomas lived in. "What's remarkable about the '20s and '30s was how open and widespread [gay culture] was in some places," said Matt Houlbrook, university professor and author of Queer London. "In some circumstances it was very, very visible and strong and vibrant and rich."

Yet, in Thomas's world, he is isolated. Actor Rob James-Collier (who portrays Thomas) said in the same ITV video as Fellowes, "He wants to be able to love, so he embarks on quite a dark and serious journey rooted in his sexuality to try and change how he is."

Here are some ways that gay people either chose or were forced to change their sexual identities in the early twentieth century.

In the early twentieth century, conversion therapy for gay men and women was an idea that was sometimes put into practice. Back in 1920, Sigmund Freud had a lesbian patient whose father wanted her to be turned into a heterosexual. (Freud did not think it would work and later wrote that homosexuality "is nothing to be ashamed of, no vice, no degradation; it cannot be classified as an illness.")

A truly frightening procedure that took place in the 1920s was that doctors would replace the testicles of homosexual men with the testicles of heterosexual corpses, as a way to boost testosterone levels. Another surgical procedure in the early twentieth century used against gay men was castration. It was used on gay people by Nazis during WWII as another way to "cure" their desires — and as a way for homosexuals to get lesser punishments and sentences in concentration camps.

Thomas is not actually in the correct time period to receive "chemical castration," but I thought it should be mentioned since it almost appears to be the method he is using. This "treatment" (read: punishment) was used on people who were homosexual in England not much after the 1920s. The Guardian wrote in 2013 that chemical castration (hormonal therapy) "has been practised all over the world for more than 50 years" (please ignore the supremely distasteful headline of the article).

One of the reasons chemical castration used on gay people has been most recently discussed in the media is because of the Oscar nominated-film The Imitation Game, which details Alan Turing's life. The WWII code breaker was chemically castrated in 1952 for his homosexuality (it was that or go to prison) — and he received a royal pardon in 2013. Although the U.K. no longer makes gay men and women impotent with hormones in an effort to change them, chemical castration is still currently used for sex offenders.

As you go through the history of how gay people were treated in England (and throughout the world), it can make you appreciate how far things have come in countries like the U.K. and U.S. — and how much further we still have to go. Thomas is humanizing this horrendous experience on Downton Abbey and I hope he stops torturing himself (perhaps with the help of Baxter) and can make peace with who he is.