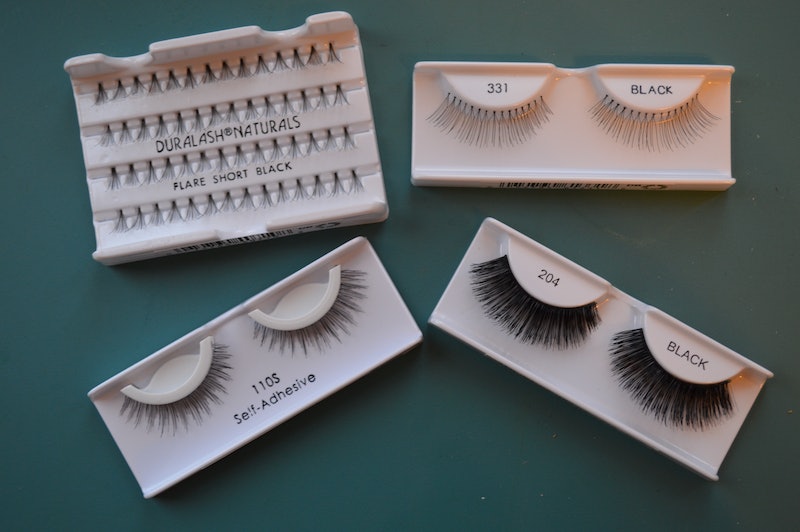 It all started two weeks ago at a birthday party, when a friend of mine told me she was wearing fake eyelashes for the first time. A lengthy conversation ensued when she revealed such information, for fake eyelashes have always been something of a mystery to me. I don't quite remember when I started wearing makeup, but from the moment I put on that first dab of Smackers to now, fake eyelashes were never part of the equation. Maybe it's because of the word "fake" (on a related note, I've also never worn extensions, colored contacts, etc.). After hearing her talk about the relative ease of application and seeing the results in person, however, I figured I would give them a go.

So here's the deal: I made a stop at my local drugstore on the way home one day and picked up four packs of false lashes in four different styles: Natural, dramatic, individual, and self-adhesive. I stuck to one brand both for consistency and because I remained unsure as to whether or not "falsies" would be worth a splurge. I then hit the internet, thoroughly researching how to apply what appeared to be nylon caterpillars to my eyelids with some sort of superglue. After watching numerous how-to videos and reading tons of tips and tricks for eyelash application, I started applying. So what follows is a short testimony to what happened when a fake lash newbie decided it was time to take the plunge — and let's just say things... Well, things could have gone better.

Deemed "LashLites," these lashes were indeed the lightest of the bunch and therefore the set I had the most hope for. I think it's implied within the fact that I never wear falsies, but I always prefer a more natural look when applying makeup; even on fancy nights out, I tend to stick to maybe just a bold lip or a smokey eye with a few layers of mascara. I figured these lashes would act as a perfect introduction — a great, subtle way to ease into the whole fake lash thing.

Indeed, the application of these particular lashes proved pretty easy. Because the lashes were so light, I didn't need to cut them or worry too much about where they fell on the lid. Thankfully, the margin for error was generous, because I certainly needed it. Since these lashes were truly the very first set I ever applied, everything laid a little off-kilter, but it was nothing that a little eyeliner and shadow couldn't fix.

But that being said, there were some things that remained unfixable. Now, I really liked how the fake lashes weren't all one length and how they in turn added a perfect boost to my lash volume. Yet, no matter how much mascara I applied, the falsies still didn't seem to meld well with my actual set. Perhaps I'm overthinking it, or maybe the quality wasn't ideal, but I still just felt like I had a set of fake eyelashes sitting atop my real ones.

The second I picked these lashes up at the drugstore and started to laugh, I knew things were not going to end up well. Labeled "Double Up," these falsies certainly lived up to the name — taking them out of the package, I could see that applying them would lead to a set of lashes if not double, then triple the size of those normally guarding my eyes. This was going to get ridiculous.

It came as no surprise, therefore, when chaos began right as I first started applying the lashes. Since they were so thick, I decided to trim them a bit. I thought the trimming itself went pretty well, but once the lashes set and I looked up in the mirror, things just didn't look right. The best adjective I could think to describe it would be patchy — my lashes were thick in some places but not others.

Moreover, these falsies just looked so blatantly fake. Now, I understand that when someone choses to "Double Up" on their lashes, it's usually not to go for the subtle look that I personally prefer. But, I don't know, unless (and honestly, even if) you're walking the red carpet, I personally don't see how such thick, obviously fake lashes would be necessary in real life.

Shout out to my roommate, who had to pose for this because the lashes wouldn't stay on long enough for me to take a picture of myself!

Some things are too good to be true, and self-adhesive eyelashes from the drugstore seem to be one of them. Advertised as able to give you "gorgeous lashes in two easy steps," I assumed these lashes would be the most successful of the bunch. The freedom from adhesive seemed like the perfect solution for someone new to the falsies game terrified of their own personal Lucille Ball situation, and in such a respect, these lashes did, in fact, succeed — but only because they never stuck on in the first place.

I don't even think it's worth commenting on the actual style of the self-adhesives — or at least these self-adhesives — because I couldn't actually see what they looked like when applied. They were definitely on the more subtle side (if these lashes couldn't stay on, it's hard to image a heavier, more dramatic pair would) with individual lashes of differing length, and had the potential to look really nice. But again, I wouldn't know — they never stayed on.

The last set of false lashes I applied weren't really a set at all, but rather a bunch of small pieces set on the lid one by one. Essentially the complete opposite of the self-adhesive I got so excited about, these were the lashes I dreaded the most, just because I knew applying them would take a decent amount of effort and attention to detail. Consequently (hard work always seems to pay off), these lashes proved immensely more successful and not just because they actually stuck to my eye, but also because they looked the best.

I got the feeling these bunches of lashes were going to work well almost immediately, as I could customize them without having to trim them (which, as proven above, does not work out well for me), placing them in the spots that could use a bit more volume. I took a few tries to get the placement right — I thought a tweezer would work best, but my hands did a bit better — but once I got the hang of things, these lashes actually started to look good.

Again, subtlety stands as reason why I personally liked the last type of fake eyelashes best. Yet, the more lashes I tried, the more I started thinking that such a subdued look perhaps defeats the purpose of wearing false lashes altogether. There are other ways to achieve fuller eyelashes without going fake, so if you go fake, why not go all the way? Why not throw all caution to the wind, channel your inner Kardashian and sport lashes that cannot possibly be real? I say go for it, but I'll probably take a rain check.