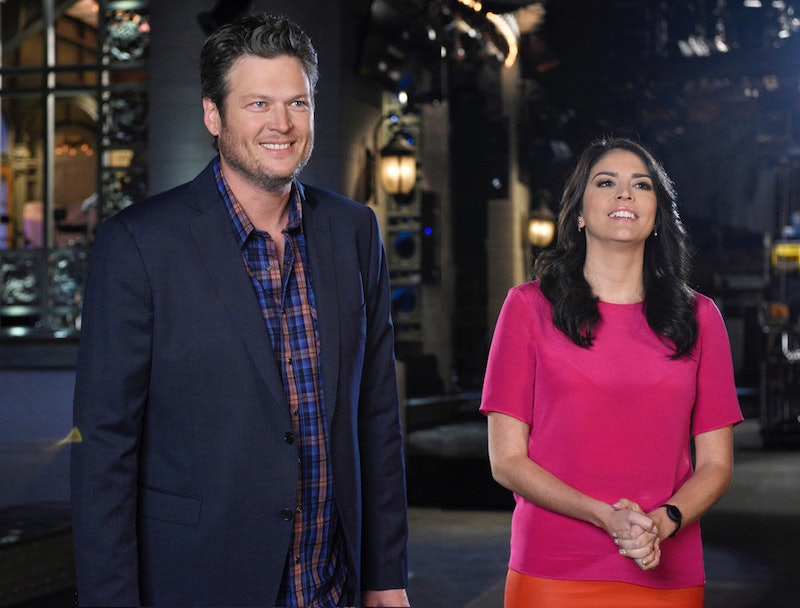 It's no secret how dreadful this season of The Bachelor is, and Saturday Night Live is well aware of Prince Farming's (Chris Soules') flop. On Saturday night, SNL took on Chris Soules' season of The Bachelor with a spoof called "Farm Hunk," addressing the lack of diversity among the women, and that awkward moment of "stealing" the bachelor away to talk to him before the elimination. And it pretty much hit the nail on the head with how terrible Chris' season is going.

Host Blake Shelton took on the role of bachelor (or "Farm Hunk") Ryan Coles, but his hair and makeup was spot on Chris. Plus, it didn't hurt that he was a farmer from Iowa that required the winning woman to move back to his small farm town. Before he even got to the cocktail hour before the rose ceremony, he said he was going to eliminate the two black women and one of the curly hair women, totally calling out The Bachelor on his lack of diversity among the 20-some women.

Then there was Leslie Jones, who knew she was going home that night, but promised to "shuck his corn all night long." ICYMI, this is not that far off from what an actual woman on The Bachelor said (she asked to have her fields plowed... le sigh). In a rare breaking of the fourth wall, Jones told "Farm Hunk" to just google "Leslie Jones SNL" and her phone number will come up, probably prompting many a person to actually google that. (P.S. Her phone number doesn't come up.)