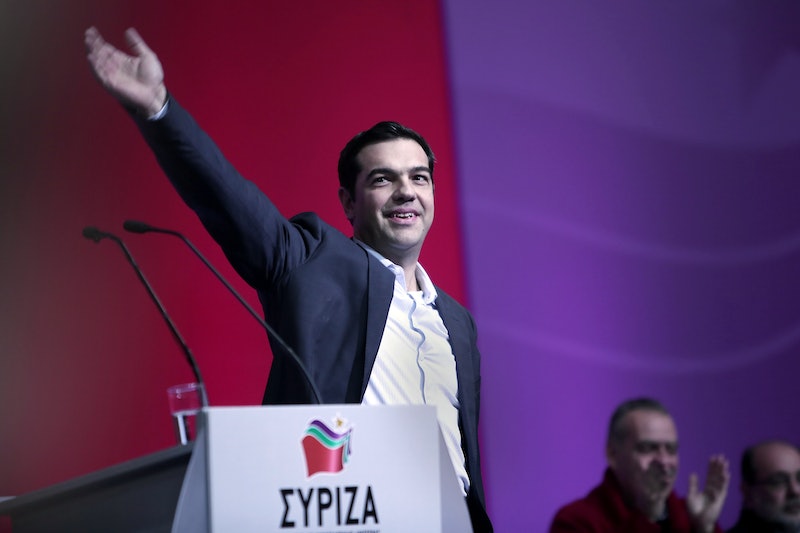 Since 2010, Greece has had a tenuous relationship with the eurozone after it was almost forced to leave when creditors lost faith in the country's ability to repay its debts. A coalition government was able to agree to certain strict bailout terms in 2012, but with leftist party Syriza winning between 149 and 151 seats in Sunday's election, it looks like Greece might once again be at odds with the rest of the European financial community and could bring the country's financial crisis back to the spotlight.

Exit polls of Sunday's snap general election show that Syriza garnered between 35.5 percent to 39.5 percent of the vote, crushing the incumbent New Democracy party's projected 23 percent to 27 percent, according to MarketWatch. But the implications of this victory for Greece and the eurozone at large are now anybody's guess. Although Syriza ostensibly wants to stay in the eurozone, after years of a country-wide depression, it no longer wishes to abide by the strict bailout conditions set by the European Union and International Monetary Fund back in 2012, including cuts in pensions and the minimum wage.

The financial community fears that Syriza's rejection of austerity measures and potential exit from the eurozone could once again send shockwaves through the worldwide economic system and further undermine the euro, which is already at record lows against the dollar.

In a statement read by a party official, Syriza credited its win to Greek exhaustion with the austerity measures imposed by the European Union. The official said:

This result can be the first step for progressive developments throughout Europe. The government will implement its political program addressing the humanitarian crisis and begin the real negotiation with our European partners.

But it isn't just Greece that's fed-up with strict austerity measures; citizens across Europe are rebelling against the eurozone "status quo." Deemed the "contagion effect," a Syriza-like party called Podemos has already established itself in Spain, which, like Greece, has experienced severe economic hardship over the past few years. France and some eastern European nations are also experiencing a resurgence of extreme, anti-EU parties.

But Greece and Spain are two of the most debt-ridden countries in the euro zone, to an extent that neither country — but particularly Greece — can actually manage the debt accumulated prior to the financial crisis without the help of the European Central Bank. Greece's economy is still in the gutter, and though cutting austerity measures will surely help the poor in the short-term, officials fear the "contagion" will spread further across the eurozone, all but guaranteeing that they won't make it easy for Syriza to do whatever it likes. Any way you look at it, trouble is brewing in the eurozone, but just how much is a question of how effectively Syriza and creditors can compromise.