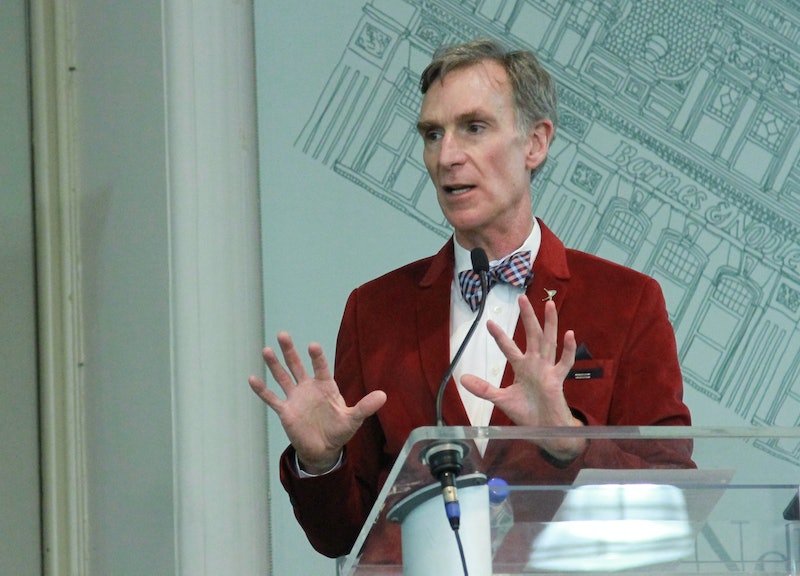 In a bizarre battle of the Bills, Bill Nye the Science Guy weighed in on Deflate-Gate and New England Patriots coach Bill Belichick's denial of using under-inflated footballs in last Sunday's NFL playoffs. In a press conference on Deflate-Gate (god, what an absurd -gate), Belichick spit some pseudoscience to "prove" that the Patriots weren't at fault. "Climactic conditions... atmospheric conditions... the preparation of the ball," he mumbled. It earned him a comparison to Bill Nye as Bill Belichick the Science Guy, until the real Science Guy talked to ABC about what he thought about Deflate-Gate.

In response to Belichick's weak explanation that the Patriots rub the balls (hehe) before the games to break them in, which may have messed with the pressure, Nye said to ABC: "What he said didn't make any sense. Rubbing the football — I don't think you can change the pressure [that way]."

It was basically a pretty kind way for the bowtied science maven to say, "Hey, Belichick, cut the crap." Bill Nye even came ready with some props — two balloons to pose as footballs to show how little squeezing the footballs could affect the pressure. He also admitted that he was a Seahawks fan, so his opinion wasn't totally unbiased, BUT we know that Nye is a true man of science, and stands on the side of the facts.

Belichick's press conference was parodied on last night's episode of Saturday Night Live, which pretty aptly captured the spirit of the thing: IRL, the Patriots coach said that he was sorry he'd spent so much time thinking about Deflate-Gate. Charming!