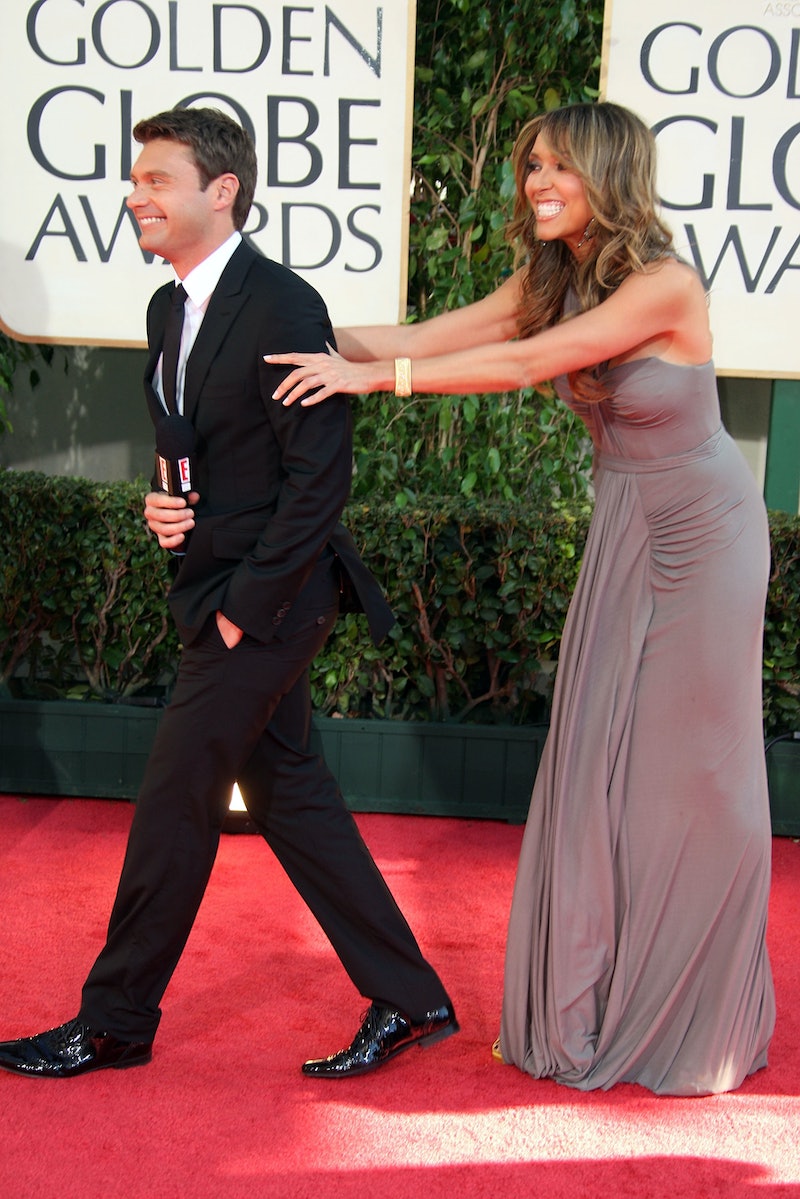 The Screen Actor Guild Awards — always the bridesmaid of the awards season, never the bride. Not only is the awards show — which honors the year's best actors in television and film — sandwiched between the always-entertaining Golden Globe Awards and the season's premier awards show, the Oscars, but it seems the SAGs can't even attract prime red carpet talent. No, I'm not talking about the nominees of the night, who are already gracing the awards show wearing the runway's latest designers (who are probably equally upset about not being featured at the Academy Awards). I'm talking about E! red carpet mainstays Ryan Seacrest and Giuliana Rancic, who have been noticeably, and oddly, MIA during the Sunday awards shows. That's right — Seacrest and Rancic are not at the SAGs, with Maria Menounos, Kelly Osbourne, and Ross Mathews taking over red carpet responsibilities. This is not a drill.

Of course, this is not the first time Seacrest was missing from the Screen Actors Guild Awards. Seacrest skipped out on the ceremony in 2013 and 2014. It's excusable, considering the man also holds every job in Hollywood that James Franco hasn't already snagged, but it's also surprising. After all, since when has Seacrest passed up the opportunity to fill up his Google calendar?

Still, his presence is missed. Not only was his absence during the 2013 Screen Actor Guild Awards so jarring for fans, that the New York Times — that's right, the New York Times , people — wrote an entire article pining for Seacrest's return, but viewers of the 2015 awards are taking note of the lack of Seacrest, and blaming the SAGs themselves.

So we all know that Seacrest is the "Big Yellow Taxi" of Hollywood — you don't know what you've got 'til it's gone. But more interesting is the outpouring of Rancic love on social media in lieu of the absence of the host, who has been more present than Seacrest in SAG awards past. Though the E! correspondent definitely has her defenders — like Bustle's own Samantha Rullo — Rancic is a lightening rod for mockery during the red carpet season. (Just see her cringe-worthy attempt to get George Clooney to take shots with her at the 2015 Golden Globes.) But it seems that awards season just isn't awards season without the present that is facepalm TV with Rancic.

But where exactly are Seacrest and Rancic if they're not at the Screen Actors Guild Awards? Where do they live if they're no longer on the red carpet? Though it's unclear what Seacrest is doing Sunday night — besides taking a breather from social media, it seems — Rancic is proving to be just like us, attending to some entirely unglamorous errands.

So, please, come back soon, Seacrest and Rancic. We never thought we'd say it, but — the red carpet is actually embarrassing without you.