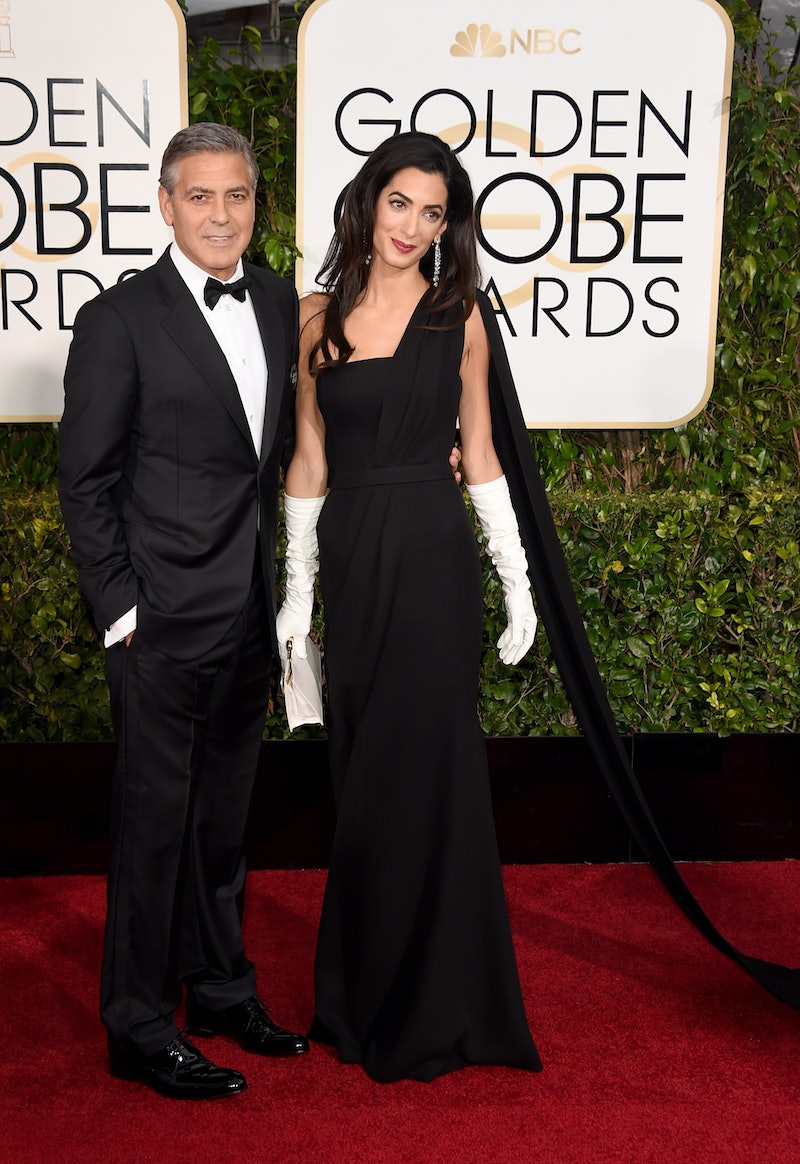 Just one hour into the 2015 Golden Globes red carpet, three things became immediately clear: One, the selfie stick is the worst accessory Ryan Seacrest has worn since Brian Dunkleman. Two, Amal Clooney transformed white opera gloves into 2015's most coveted trend in one fell swoop. (Though, I will dismiss anyone Dowager Countess-style should he or she credit Alamuddin before Maggie Smith for the trend. Respect your elders' sick fashion sense, people!) And, three, George and Amal Clooney will not take shots on the red carpet, making them officially too classy for the Golden Globes.

It all started with polarizing E! correspondent Giuliana Rancic, who fangirl-ed all over the human rights lawyer who is credited far too often just as George Clooney's wife after catching a glimpse of Amal and her accessory: "I could have sworn I caught a glimpse of white gloves on Amal — a woman with white gloves on the red carpet is a woman after my heart!"

It at first appeared that E! would choose Seacrest over Rancic to talk to the Clooneys, who are attending the Globes in order for George to accept the Cecil B. DeMille Award for his philanthropy and on-screen success (and, based on the couple's "Je Suis Charlie" buttons on their red carpet outfits, to show support for the terrorist attack on French magazine Charlie Hebdo earlier this week). But, before long, Rancic caught the Clooneys on the red carpet, and asked George to take a shot of his tequila, Casamigos Ultra-Premium Tequila. George's response? "I think it would be a bad idea. Because I've spoken with alcohol, and I've gotten myself in trouble."

You know, after that uncomfortable moment, I would need a shot too, Giuliana. (As did the entire TV viewing audience, who shut down the website for George's tequila company.)

Still, Seacrest's interview with the Clooneys wasn't much better. After some ho-hum chit-chat surrounding Amal's gown — made all the more trivial by the presence of the Clooneys' "Je Suis Charlie" buttons — Seacrest presented the couple with a "Game Over" T-shirt, referencing the September nuptials between the lawyer and the established bachelor. Based on this shot, it seems like the Hollywood jokester wasn't quite laughing about the apparel referencing his reputation:

So, let's run down what we learned from E!'s interviews with the Clooneys:

1) George refuses to drink, responsibly or irresponsibly, on the red carpet.

2) Amal actually owns a pair of white opera gloves, which she chose to style with her gown.

3) George, otherwise known as Mr. Amal, will no longer joke about his bachelor past.

4) The Clooneys realize there are more important things in the world happening now than the glitzy Globes.

Yep, George has officially grown up. And is far, far too classy for this drunken mess of a night.