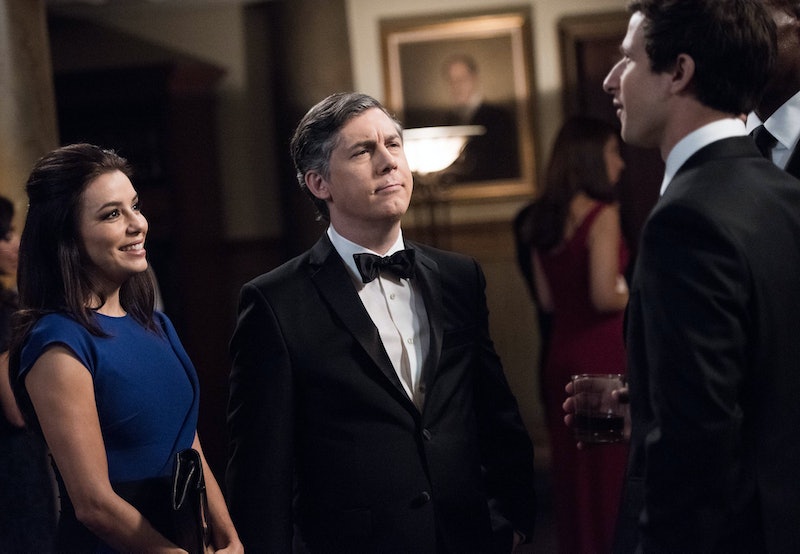 Reunited and it feels so good. Yes, I was singing that Peaches & Herb song in my head once I heard the brassy Brooklyn Nine-Nine theme song ring through my living room. After a week without Brooklyn Nine-Nine in my life, I was of course thrilled to see it on TV again. But once I saw Andy Samberg's former SNL cast member and partner of crime in the classic digital short "Lazy Sunday," Chris Parnell, appear on screen with Jake I was singing "Reunited" for a whole different reason.

Oh yes. This season of Brooklyn Nine-Nine has been all about guest stars, and Sunday night's episode was jam packed with them. Parnell joined Kyra Sedgwick's Madeleine Wuntch and Eva Longoria's Sophia as the latter's boss Geoffrey Hoytsman. Unfortunately, this reunion wasn't as happy as I had hoped, between the fictional characters, of course.

In this episode, we finally start to see the cracks in Jake and Sophia's relationship. Sophia wants to "press pause" on their relationship right now because she thinks it's hurting her career. In case you need a refresher, cops and defense attorneys are pretty much enemies, and it's really a wonder that Jake and Sophia have been able to make it this far. Sophia heard that her boss hasn't been giving her any good cases because she's dating a police officer. So she wants to put things on hold between her and Jake for a bit until she figures out how to make it work.

Clearly, Sophia doesn't know Jake very well, because telling him to stay out of her professional affairs for a while is like telling him to do exactly that. Jake takes Sophia's plea as an invitation to make things right with her boss on his own. Nobody can resist the old Peralta charm, right?

Oh, that's so wrong. Jake shows up to Sophia's event for the Association of Brooklyn's Public Defenders and tries to woo Hoytsman. Parnell's masterful ability to be stoic yet a total buffoon in character is out in full force in this episode. Jake stumbles a bit at first when trying to befriend Hoytsman, but he soon hits the jackpot when he discovers that Hoytsman is a big gambler. The two eventually bond over placing ridiculous bets, like identifying the charcuterie, attempting to not knock over the champagne glass tower, and guessing how many egg rolls tall Terry is. I was very jealous of Jake's celebratory egg roll with that one.

Unfortunately, Hoytsman doesn't just dislike cops because they're often at odds with public defenders; it's because he breaks the law. Jake walks in on Hoytsman snorting some cocaine in the bathroom, which he of course has to arrest him for.

Even though Jake planned on giving Hoytsman a very light punishment for drug possession, the whole ordeal was enough to embarrass Sophia. Jake accidentally told Sophia that she loved him earlier in the episode, but she did not feel the same accidental love for him. Jake's antics that evening coupled with her weaker feelings for him caused Sophia to end the relationship.

I can't say that I'm sad to see these two finally break things off. It's not that I disliked Sophia. I just didn't feel any chemistry between her and Jake. She just wasn't weird enough to be with him. Clearly, this opens the door for Jake to try to get together with also recently single Amy, which is an option I'm certainly interested in entertaining.