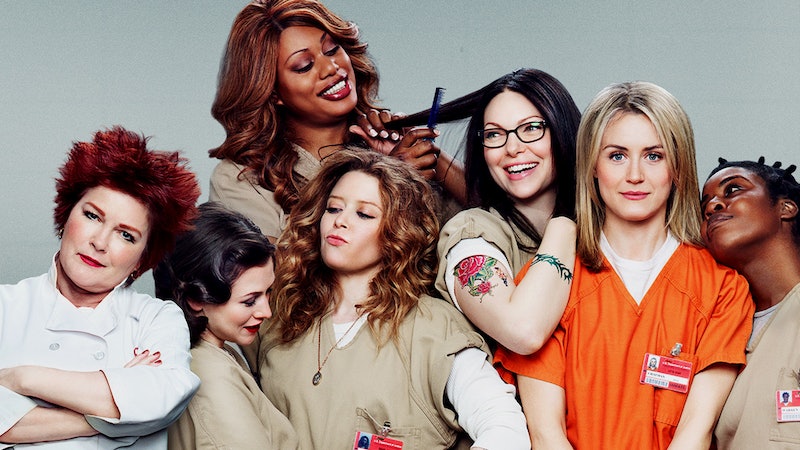 When awards show start off with good news, it's such a blessing. No one likes disappointment right off the bat, so when Uzo Aduba took home the Actor for Best Actress in a Comedy Series, and Netflix's Orange Is The New Black took home the 2015 SAG Award for Best Ensemble in a Comedy Series, all felt right with the world. We saw most of our favorite Litchfield inmates on stage to accept the honor — Natasha Lyonne, Danielle Brooks, Laverne Cox, Selenis Leyva, Adrienne C. Moore, Taryn Manning and many more — but where are Piper Chapman and Alex Vause? Is OITNB star Taylor Schilling at the SAGs, and where is Laura Prepon, too?

From social media, it looks like Prepon attended Entertainment Weekly's pre-SAG Awards party, but so far, she hasn't been spotted at Sunday night's ceremony. As for Schilling, well, the 30-year-old actress is likely in Park City, Utah for the Sundance Film Festival. Schilling's movie The Overnight premiered at the festival this weekend and Indie Wire calls it "hysterically funny." Schilling stars with Parks and Recreation's Adam Scott and inimitable funnyman Jason Schwartzman, so, how can this movie NOT be good?

Schilling is very plausibly be at Sundance, but one thing's for sure, she's not that the SAGs. Moments after OITNB took home the gold, she tweeted:

And Prepon did work her smize on the red carpet Saturday night, so maybe she'll show up at the SAGs on Sunday?

It's hard to really miss Chapman and Vause, though, when everyone else is so damn amazing:

Congrats, everyone! And Chapman and Vause, if you're doing something illegal, jail can be tough, I hear.