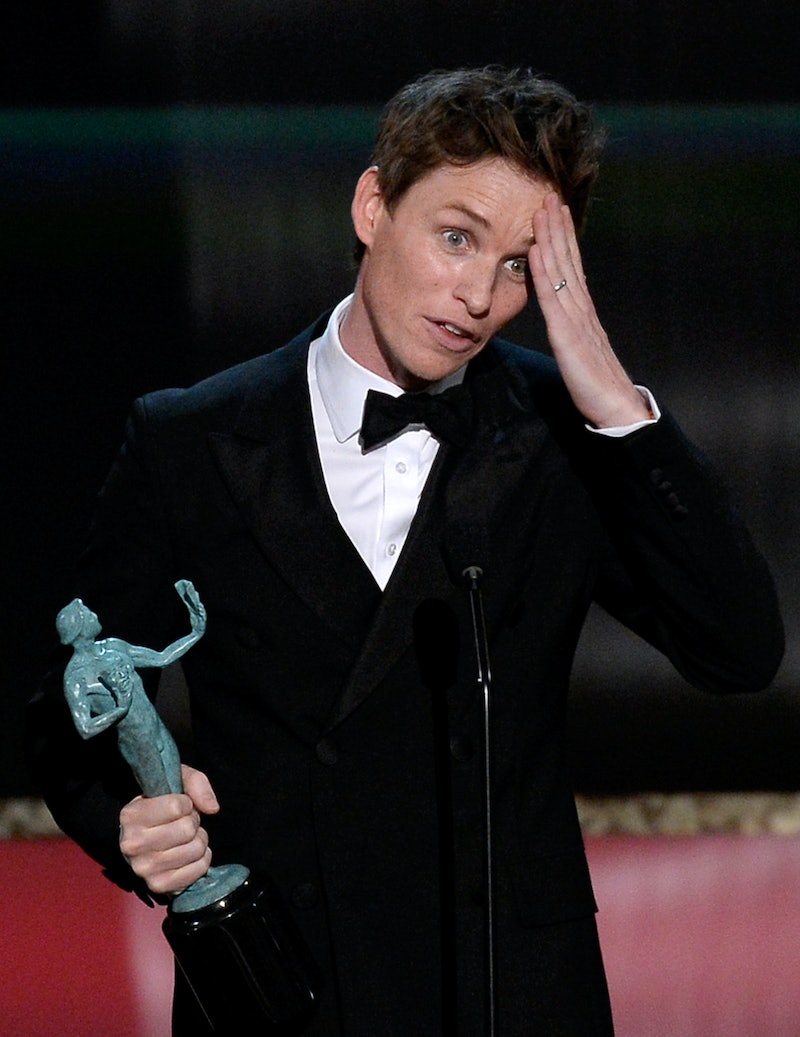 It might seem, at first, like there's no downside to being an awards show frontrunner, but I can think of a few reasons it's not all it's cracked up to be. For one, there's the pressure of living up to the predictions, and for another, it must be pretty hard to convincingly look surprised each time you take home another award. Taylor Swift, as we all know, could tell you all about that particular struggle, and as of this year, it looks like she has company; Theory of Everything star Eddie Redmayne, who's proved over the course of this awards season that he's just as guilty as the singer of mastering the art of the "surprise face."

Take Sunday night's Screen Actors Guild Awards, for example. When his name was called for the Lead Actor in a Drama race, Redmayne's expression was just a little too shocked for someone who's considered the leading contender for his category and the expected winner of the Oscar. Clasping his face in his hands and looking like he was holding back tears, Redmayne rushed the stage like someone who'd never won an award before in his life, let alone a Golden Globe and a half-dozen critics circle awards, all within the last few weeks. I mean, just look at that level of emotion:

Pretty intense, right? It's reminiscent of the "surprise face" queen herself, Swift, whose own expression after winning her thousandth award in a row tends to look something like this:

See the resemblance? All kidding aside, though, there's really nothing wrong with Redmayne or Swift being genuinely shocked every time they win and choosing to express their emotions. The bigger problem would probably be if their trademark face was an "of course I won" look, instead. Still, Redmayne better watch himself if he's going to be a movie star in the long run, as there's only so long he can display the same "who, me?" expression without people starting to question its honesty. Thankfully, he has only a few more award shows left before the end of this season, and if he does end up winning the Oscar, it's likely people will be more focused on his moving speech than the look on his face when he hears his name.

More like this
Everything To Know About Taylor Swift’s 10th Studio Album, 'Midnights'
By Grace Wehniainen and Jake Viswanath
Paul Mescal, Man Of Mystery
By Samantha Leach and Heather Hazzan
Twitter Has So Many Thoughts About ‘Don’t Worry Darling’ After Its Release
By Stephanie Topacio Long
Florence Pugh Reflected On Her ‘Don’t Worry Darling’ Experience On Opening Day
By Brad Witter
Get Even More From Bustle — Sign Up For The Newsletter