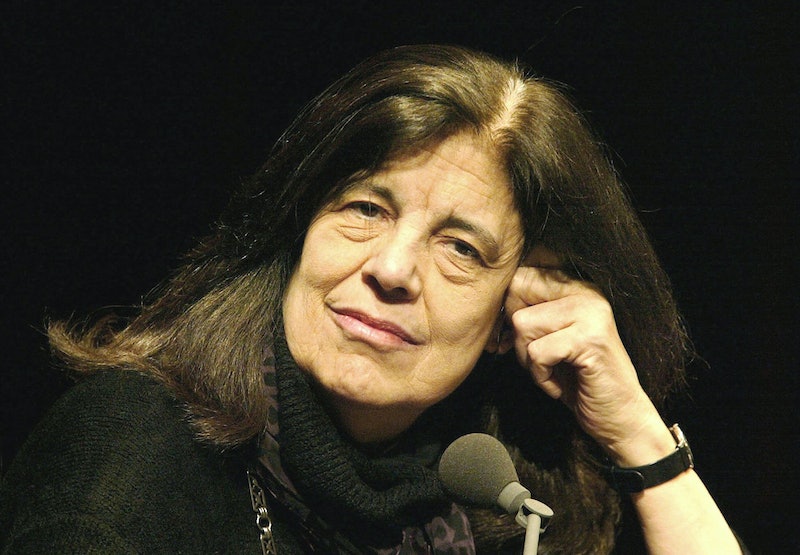 As an undergrad English major at a small liberal arts college in the Midwest, it was only a matter of time until I was introduced to Susan Sontag. My sophomore year, in a cross-listed English and Media/Film Studies class, my professor paired a range of Oscar Wilde readings with Sontag's "Notes on Camp," an essay that perfectly coined so much of what Wilde enveloped. Her thoughts were both challenging and thrilling, and I was instantly drawn to read more.

Sontag's essays are what made her a well-respected writer and critique in the worlds of art and academia. She wrote about everything from the intersection of high and low art, to photography, to AIDS and other illnesses, and leftist ideologies. In her lifetime, Sontag published four novels, nine works of nonfiction (famously including On Photography, Illness as a Metaphor, and Regarding the Pain of Others), wrote and directed four films, four plays, and had countless essays and stories published in periodicals and journals. Oh, and on top of all this, she was a human rights activist for decades and the president of the American Center for Pen from 1987 to 1989.

Susan Sontag was larger-than-life, and her compassionate, complicated, and altogether dedicated voice lives on in her books, essays, speeches, letters, and interviews. Here are nine influential quotes from Susan Sontag's career that are sure to make anyone re-think the way they read, write, and study literature and culture:

On Writing and Literature

“My idea of a writer: someone interested in everything.”

“To have access to literature, world literature, was to escape the prison of national vanity, of philistinism, of compulsory provincialism, of inane schooling, of imperfect destinies and bad luck. Literature was the passport to enter a larger life; that is, the zone of freedom. Literature was freedom. Especially in a time in which the values of reading and inwardness are so strenuously challenged, literature is freedom.”

—At the Same Time: Essays and Speeches

“To me, literature is a calling, even a kind of salvation. It connects me with an enterprise that is over 2,000 years old. What do we have from the past? Art and thought. That’s what lasts. That’s what continues to feed people and give them an idea of something better. A better state of one’s feelings or simply the idea of a silence in one’s self that allows one to think or to feel. Which to me is the same.”

On Criticism, Art, and Culture

On Solitude and Curiosity

“I want to be able to be alone, to find it nourishing — not just a waiting.”

“Do stuff. Be clenched, curious. Not waiting for inspiration’s shove or society’s kiss on your forehead. Pay attention. It’s all about paying attention. Attention is vitality. It connects you with others. It makes you eager. Stay eager.”

On Books Worth Reading

“A novel worth reading is an education of the heart. It enlarges your sense of human possibility, of what human nature is, of what happens in the world. It’s a creator of inwardness."