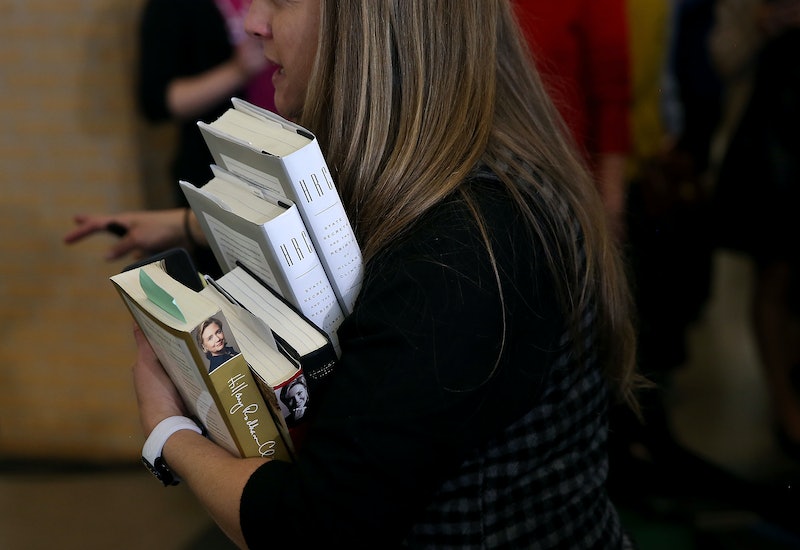 But all jokes aside, being an English major is awesome. You're not only fulfilling your dream of spending four years of writing a never-ending barrage of papers, but you'll also learn a lifetime's worth of literary references that most non-English majors will never understand. It's glorious, and worth every single cent of your college loans.

Once upon a time, I too was an English major with high hopes for the future. I was going to be the next Salinger, win the Pulitzer, and even get nominated for the Nobel Prize for Literature. Perhaps things haven't gone entirely as I planned, but hey, I still have time. At least I'm a full-time freelance writer and get to work from home in my pajamas! I do love my pajamas.

If you've chosen to major in English, then this list is for you. If you're just starting this fall, then this is what you can expect. Because there are some things only we English majors can truly understand.

everyone asks whether you WANT TO BE A TEACHER...

...but you probably You want to be a writer

In fact, you've dreamed of this since you were 12.

WHEN YOUR PROFESSOR CHOOSES AUSTEN’S ‘PERSUASION’ OVER ‘PRIDE AND PREJUDICE,’ YOU GET EXCITED...

At the prospect of judging your friends who've only read P&P.

AFTER ONE DRUNKEN NIGHT OF SCRIBING STANZAS AND RHYMES, YOU BRIEFLY CHANGE YOUR MAJOR TO POETRY

Because you're obviously the next Sylvia Plath

YOU LOVE EXPLAINING TO PEOPLE WHAT A ‘CONCEIT’ IS

“You’ve never read John Donne? I thought that was a staple no matter what your major.”

WHEN YOU DO POORLY IN A MANDATORY SCIENCE COURSE YOUR EXCUSE IS EASY: ‘I’M AN ENGLISH MAJOR.’

YOUR SECOND HOME IS THE CLOSEST COFFEE SHOP

AND WHEN YOU’RE IN THAT COFFEE SHOP, YOU REALLY HOPE A STRANGER WILL ASK YOU WHAT YOU’RE WORKING ON

Because "my honors thesis" has a nice ring to it.

THE BARISTA KNOWS THAT ALL YOUR DRINKS GET AN EXTRA SHOT OF ESPRESSO, UNLESS OTHERWISE STATED

How else are you supposed to stay up until 5am reading that 75-page assignment? And that's just one class!

you know EVERY CONVERSATION HAS A DEEPER MEANING

YOU LIVE TO CORRECT PEOPLE’S MISPRONUNCIATIONS OF DOSTOYEVSKY, GOETHE, AND RILKE

YOU TELL PEOPLE YOU READ ‘BEOWULF’ IN THE ORIGINAL OLD ENGLISH, BUT DON'T TELL THEM YOU DIDN'T UNDERSTAND IT

YOU LIKE TO TELL PEOPLE YOUR LIFE IS SO ‘KAFKAESQUE’

But aren’t all our lives?

WHEN YOUR FAVORITE PART OF THE LIBRARY IS UNDER CONSTRUCTION FOR A WEEK:

WHEN SOMEONE TELLS YOU THEY'RE AN ENGLISH MAJOR BECAUSE they 'DIDN'T KNOW WHAT ELSE TO DO:'

Get some passion, man!

you know that A 1000-PAGE BOOK IS NOTHING TO FEAR

But a 150-page book is. Like, how can they get to everything they want to say in so few pages?

and YOU’VE READ EVERYTHING FITZGERALD EVER WROTE

Every book brings you one step closer to the ultimate library.

YOU plan to live in PARIS at some point, BECAUSE ALL THE ‘REAL’ WRITERS did

And you don't forget to kiss Oscar’s headstone with your red lipstick.

Except for a whole store of old books.

If you were a dude, you’d probably get an erection over just the idea of buying new ones.

YOU ONLY GO TO SPECIALTY STORES TO BUY YOUR PENS

You're never without at least five of your prized ultra fine point BFFs at all times.

YOU CONSIDER YOURSELF AN AUTHORITY ON GRAMMAR

And break into cold sweats when you accidentally fuck up "your" and "you're" in a text because you were "in a rush."

You also know you’re probably, most definitely, next.

Even if it doesn’t fit every time.

and WHEN YOU HAVE PARTIES, you'd better believe THEY have LITERARY THEMES

“Writing is not, for us, an art, but breathing.”

YOU LIVE TO PROOFREAD YOUR FRIENDS' PAPERS

Although it always ends up getting edited, not just proofread. You can't help yourself!

YOU WANT A NEW ROOMMATE WHEN YOU FIND OUT HER FAVORITE AUTHOR IS JACK KEROUAC...

Beat writers are SO something you like when you’re 13.

...though YOU do HAVE ALLEN GINSBERG’S ‘HOWL’ MEMORIZED

Because as a future English major, you were that cool at 13.

WHEN YOU DON’T GET ACCEPTED INTO A CLASS, YOU COMPARE YOURSELF to VONNEGUT

You also know you have the next Cat’s Cradle somewhere in you.

Save that shit for the science majors who wouldn't recognize a hyperbole even if it jumped on their face and started to hump.

You were Miss Havisham last year, so Oliver Twist this year?

THEN YOU’RE ANNOYED WHEN NO ONE ‘GETS IT’

Should have just gone all out and been Tess of the d'Urbervilles.

And aLTHOUGH YOU’LL NEVER ADMIT IT, YOU’RE SCARED YOU’LL ACTUALLY END UP BEING A TEACHER AFTER ALL...

Not that there's anything wrong with that. It just wasn't part of the plan.