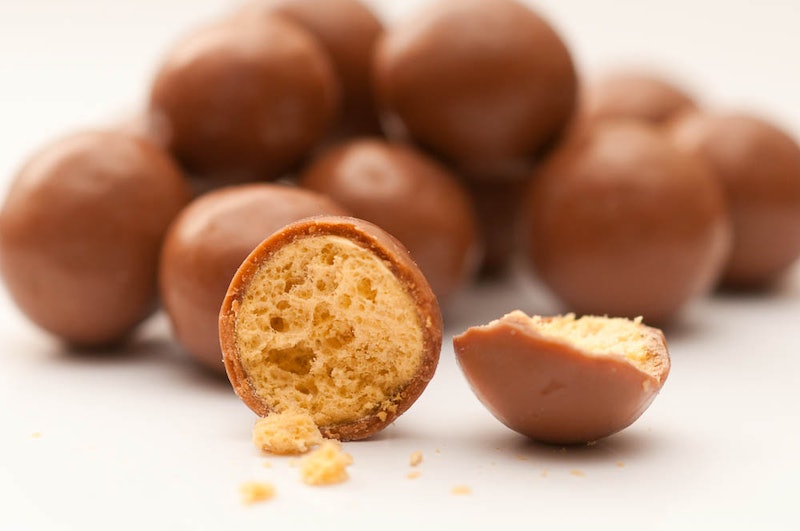 Dear America, I ask you: Haven't I given up enough? When I emigrated here from my rainy homeland, I left behind Percy Pigs, Made In Chelsea, and Marks & Spencers, and I accepted what you gave me in return: Pepperidge Farm goldfish crackers, Wal-Mart, birthday cake-flavored M&M's, The Bachelor. But thanks to last week's devastating trade deal stopping most British chocolate from being imported to the States, my only recourse now is to march down to the Department of Immigration and say: Look. Look. This wasn't part of the deal.

In a confusing twist, you know who we can blame for this? Hershey's. The company sued Let's Buy British Imports, the importer I've probably single-handedly kept in business, for bringing products over the pond that were never meant to be in the States — and, apparently, infringing the rights of American chocolate brands. A judge who is now on my hit list agreed with Hershey's.

When I became a resident alien (catchy!) of the United States, I signed dozens of documents. I can tell you right now that not one mentioned the possibility that British chocolate may no longer be available overseas — and if they had, I might have had some serious words with the lawyer. I mean, buying Flake bars with my pocket money is most of what I can remember about 2003. I've eaten Maltesers on planes, trains, and airplanes, after break-ups and during essays, and chomped down on many which had been on the floor for several seconds. And here's a news flash, America: your KitKats are not our KitKats. But now they'll be all the KitKats I can have.

Most of the words I'd like to use next are expletives, so let me quote Nicky Perry instead. She told The New York Times:

Things in the world are bad enough as it is, and now you’re going to take away our chocolate?

Here's a breakdown (I mean this both in terms of the chocolate I'll never forget, and what's happening to me emotionally).

Oh, my beloveds. Maltesers are what Whoppers would be if Whoppers weren't done wrong. They're crunchy and dissolve-y, sweet and savory, chocolate and wafer all at once. They'll melt in your mouth if you're not careful, or if you're just into that. I brought two family-sized packets with me back from my last trip home, but thanks to the entire season and a half I managed of Friends on Netflix this weekend, they're all gone now.

Cakes are nothing without them.

Fine. You can take this one. The tagline for Yorkie has traditionally been "It's NOT For Girls," and though I personally hate Yorkie bars, this still sucks. Can we figure out some sort of trade?

Kind of like a Rice Krispie cake melded together with toffee. I grew out of them, but just think of all the sad American children who will never even get the chance.

This is not your mother's Dairy Milk. (Unless your mother is English, in which case tell her to give me a call so we can weep together.) British Dairy Milk is milk-based rather than sugar-based, and is lighter in color and creamier than its American cousin. Dairy Milk is synonymous with "chocolate" in England in the same way "Sellotape" and "tape" are synonymous, or "Kleenex" and "tissues," or "Band-Aid" and... well, you get the idea.

Oh, America, you've outdone us on many things — that random four-day weekend in November where you give thanks for reasons I still don't exactly understand, takeout options, House of Cards, fried food. Super-hot actors (you saw our Jude Law and raised us Joseph Gordon-Levitt). Cheese-based products. So don't take this the wrong way, but your KitKats are all wrong. They disgrace the good name of KitKats. "Have a break, have a KitKat," is its tagline in the United Kingdom. "Have a break, watch your KitKat melt forlornly into your tea after two and a half seconds," is more like it.

So who's with me? #BoycottHersheys until they bring my chocolate back. The revolution is just beginning.