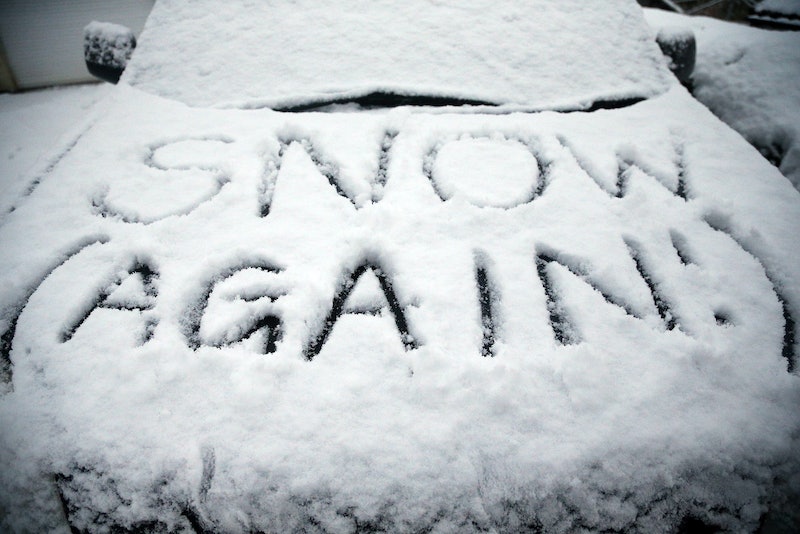 It is a truth universally acknowledged that a single storm in possession of a huge amount of snow must be in want of a boatload of media coverage. Given that Winter Storm Juno is expected to be one of the toughest blizzards we've seen in recent memory, it's therefore no surprise that it's giving rise to some incredibly melodramatic headlines. In fact, some of them are so melodramatic that they're downright comedic — both intentionally and unintentionally. In an effort to amuse ourselves while we're all stuck inside, let's take a look at some of them, shall we?

Oh a slightly more serious note, yes, the storm is something to watch out for, and no, I don't mean to minimize the impact it may have. At the same time, though, whipping ourselves into a frenzy and freaking the eff out about it probably isn't going to help matters; in fact, it may actually make them worse. I'm a firm believer that the more serious a spot we're in, the more need we have for comedy — so this examination of the wackier headlines surrounding the storm is meant merely to bring a little levity to the situation. Some of them are actually fairly mild; as is to be expected, a lot of the "WE DO NEWS AND NOTHING BUT NEWS" sites are mainly sticking with the facts (how much snow we can expect, how large an area we think it's going to cover, and so on) embellished with a few choice words (there's a lot of "bracing" for "historic" amounts of the cold stuff going on). Others, though? Hoo boy. There are some real doozies in here, and I mean that in the best way possible.

So go on. Grab a mug of hot chocolate and a warm blanket and settle in. We're going to be here for a while, so we may as well have a little fun while we're at it, right?

Just in case you were curious about exactly how far the storm zone stretches. Yowza.

2. "Winter Is Coming: How to Prepare for 'Historic' Winter Storm Juno."

Look, I know Ned Stark can be a little single-minded and repetitive... but maaaaaaybe we should have listened to him a little more closely. Just maybe.

3. "Winter Storm Garbanzo Bean (Juno) Will Be a Blockbuster."

Decoded Science decided that, rather than name the storm after a Roman goddess, they were going to bestow upon it the name of a nutritious and delicious legume. Why? I have no idea, but the resulting headline is my favorite thing ever.

Anyone have time for a quick lesson with Pai Mei before we get buried alive, never to be seen again?

(OK, to be fair, this one is from Sporting News, so of course it's going to concern itself with the state of the Northeast's upcoming games... but still. Unintentional comedy at its finest.)

And just to follow it up, have a similarly hilarious contrast between the first part of a headline and the second. As is the case with Sporting News, the disparity here can be explained by the fact that we're looking at a niche site, the beloved Internet-based theater haven known as Broadway World. I'm betting that a lot of those shows will be playing to near-empty houses — but hey, if the storm eats us alive, at least we can go down singing, right?

7. "Snowpocalypse 2015: The Wrath of Juno: Survival of the New Englandest."

Sorry, Winter Storm Garbanzo Bean; you've just been ousted as my favorite thing ever. Providence Monthly's take on it just stole your crown.

I like the idea of a personified snowstorm "looming" over us. In my head, it looks like Frances de la Tour in Into the Woods preparing to throw the world's biggest snowball straight at our tiny little faces.

Or she could just set upon us with her gigantic, snowy fists. That works, too.

Sadly, this headline is only visible in the URL for Gawker's story on The Vane; its official title is "What You Need to Know About Today's 'Crippling' Blizzard: Monday Update." I'm stubbornly going to refer to it in terms of Chicken Little, though, because that is hilarious.

11. "New York City Hunkers Down for the 'Worst Snowstorm in History': Shelves Are Cleared Ahead of Blizzard That Threatens THREE FEET of Snow. Thousands of Flights Cancelled and Workers Told to Stay Home."

Leave it to the Daily Mail to have the longest headline in history for the supposed worst snowstorm in history, complete with UNNECESSARY CAPITAL letters.

And as a bonus, I give you the least melodramatic headline about the storm:

To be fair, this one comes from Maryland, which isn't preparing for nearly as much snow as the states slightly further north than it... but still. Talk about the understatement of the year.