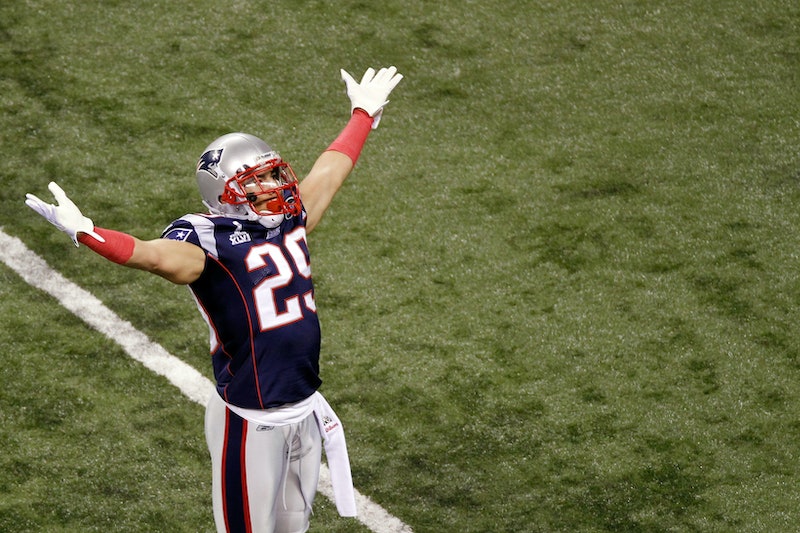 Hosted in Phoenix Stadium in sunny Glendale, Arizona, 46 players on each team will suit up for the Super Bowl Sunday and take the field, vying to claim the biggest prize in the NFL — the Vince Lombardi Trophy. Make no mistake, winning a championship in a sport as punishing and complex as professional football is in every sense a colossal undertaking. But it's always worth looking at things in another light. So here's a question: how do NFL player salaries compare to the world's toughest jobs?

First things first, a necessary disclaimer. Relative to the rest of the professional sports world, NFL players get a pretty raw deal. That's because unlike Major League Baseball or the NBA, where contracts are guaranteed from the moment they're signed, football players can be cut at any time, in most cases without getting any more of the money they signed on for. This isn't altogether uncommon in, you know, the real world, but given the substantial risk of injury posed by running the world's biggest, fastest humans into one another over and over again, it's still a harrowing position for many players, replacement-level, minimum-salary ones in particular.

But thats said, the money these folks make is surely still eye-popping to most average people, especially when compared to some of the people charged with the world's toughest, most selfless, and most important jobs. For these purposes, we'll be looking at annual salaries from this past season.

The NFL's Minimum Rookie Salary Is $20,000 More Than Than The President's

Of course, President Obama gets a lot of on-the-job perks that, say, Seattle Seahawks rookie tackle Justin Britt doesn't — free meals, a rent-free eight years living in an enormous, historically significant mansion, free air travel, round-the-clock security services, and so forth. But at the end of the day, Britt does indeed haul in a higher pre-tax annual salary than does the so-called "leader of the free world," earning $420,000 over the course of the 2014-2015 NFL season to Obama's $400,000.

As far as tough jobs go, advocating for women's education in the face of death threats from the Pakistani Taliban is pretty high up there. And, as almost everybody now knows, Malala Yousafzai very nearly paid the ultimate price for her work — she was shot in the head by a would-be assassin while riding on a school bus in Oct. 2012. The incident vaulted her to the forefront of international women's rights movement, and she's been a prominent, vital voice ever since, authoring a memoir and co-winning the 2014 Nobel Peace Prize.

The deal she secured to write her memoir, all at the tender age of 15? An estimated $3 million, according to the BBC, which is right around half what Seahawks star running back Marshawn Lynch earned this season. For what it's worth, Malala is also a much more expansive interview.

Future Hall of Fame quarterback Tom Brady is often lauded by Patriots fans and Boston sports media for his team-friendly willingness to tweak his contract terms, freeing up flexibility for new, roster-bolstering free agent signings. By contrast, the public school teachers of America — a daunting and challenging job, to say the least — have endured a lot of scrutiny and high-profile criticism from the political class in recent years, centering largely on guaranteed pay, unions, and performance.

And, while Massachusetts boasts some of the best-paid public school teachers in the entire country (trailing only New York as of Dec. 2013), they'll never sniff a fraction of what Touchdown Tom made in his 2014-2015 season. Brady hauled in a whopping $14,800,000, actually a somewhat modest figure relative to his star contemporaries, while the average teacher salary in his state is just $73,129.

Within the medical field, being a neurosurgeon is one of the best-paying jobs you can get, commensurate with the immense skill, training and dedication it requires. Neurosurgeons in the United States earn an average salary of $355,034 per year, according to PayScale.com.

Conversely, while many people have lauded Patriots star cornerback Darrelle Revis for a downright surgical level of skill in pass protection, let's be honest, he's not fixing people's brains (sadly, recent scientific findings have suggested that pro football achieves quite the opposite). That said, Revis still hauled in well over 33 times that average neurosurgeon's salary from his 2014-2015 contract — he earned a whopping $12,000,000 this year, a premium price for a player at his position.