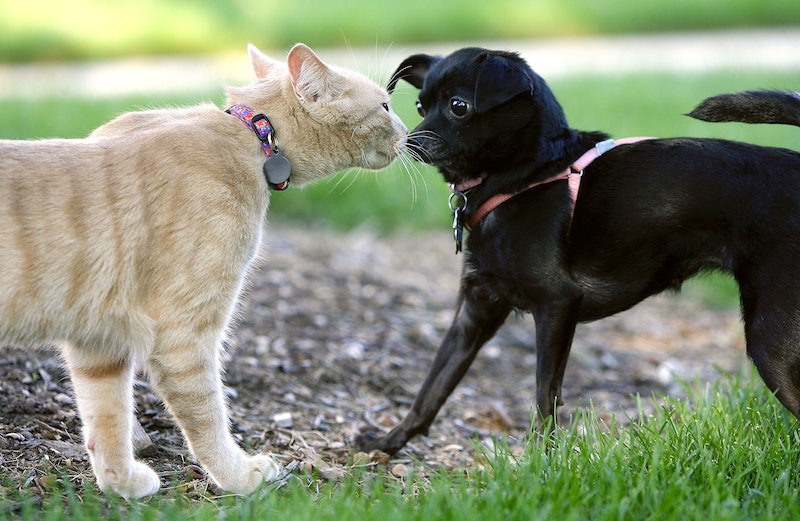 It's often said that people resemble their pets — but can the type of pet you have really predict your personality type? According to some psychological studies, whether you're a dog person or a cat person actually says a lot about who you are. Are you surprised? Not surprised?

In recent years, researchers have been dipping their toes in the "what does my pet say about my personality?" waters — and the results are actually pretty interesting. An article published last week ion Psychology Today pulls a bunch of them together to see what our favorite pet type might say about who we are. The studies all take a similar format; they rely on some combination of respondents self-reporting whether they consider themselves a dog person or a cat person and answering a bunch of questioned geared at assessing their personality. Whenever there are correlations between dog vs. cat people and specific traits, that might indicate some fundamental differences between people who prefer dogs and people who prefer cats. Makes sense, right?

It's worth noting, though, that while there have been some studies about the topic, there haven't been a boatload of them yet; as such, we could probably stand to have more data before we say for certain that, yes, cat people have certain personality traits, and yes, dog people have other personality traits. Come to think of it, we also don't seem to have much data pertaining to people who consider themselves both a dog and a cat person, or people who consider themselves neither. I would argue that pet preference isn't an either/or kind of issue; there's a huge spectrum of answers, and eventually, it'd be interesting to see research that covered the whole thing, rather than just two possibilities.

In any event, though, here's what we're pretty sure we know so far about cat people vs. dog people? What do you think? Do you agree or disagree with what the research thus far has revealed?